Evan Bayh and Harold Ford: Hypocrites Who Cut and Run 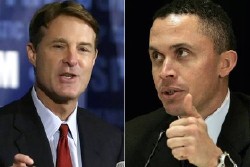 Evan Bayh and Harold Ford Jr. have a lot in common, and not because they’re both legacies who rode into public office on their family name. Both are anti-progressive Democrats who have built their political careers on making the Left feel small and weak – egged on by a corporate media that likes to call them “centrist.” Both are touted as the kind of Democrats who can “win” in swing states, but what rarely gets mentioned is that neither have had to prove their mettle. Bayh never had a tough Senate fight in Indiana (unlike his Dad, who actually stood for something), and at the slightest hint of a rocky re-election opted to call it quits. Ford ran for the Senate in Tennessee by running as far right as he could, only to lose a close fight after being race-baited. Rather than build on that historic campaign, Ford moved to the blue state of New York – where he now thinks he can win a Senate seat. With Evan Bayh now leaving the Senate, does anyone believe he will go back to Indiana? He’ll probably stay in Washington DC to be a lobbyist.

Despite having been there for 12 years, it’s hard to really know what Evan Bayh has done in the Senate – besides attack progressive measures on talk shows, and lecture Democrats on “electability.” Having been elected and re-elected with more than 60% of the vote in Indiana, his career was premised on being a Democrat who can “win” in a Republican-leaning state. His father – a liberal Senator from the 1970’s – had lost re-election to Dan Quayle in 1980, and Bayh has been obsessed ever since about being a “moderate.”

But it’s always been about political ambition. When Bayh first ran in 1998, his TV ads were so generic that they didn’t even mention he was running for Senate. The joke among Indiana journalists at time was that he planned to recycle them for his presidential run. In Washington, he was predictably mentioned as a running mate for the 2000, 2004 and 2008 Democratic tickets. For no reason, apparently, than being from a red state.

Meanwhile, his wife sits on the boards of 14 corporations – financial contacts that will keep his campaign well-funded for that White House bid. It’s those connections that also ensured him to be a reliable corporate Democrat in the Senate, squashing any populist progressive bone in the moribund Party’s body.

So why did Evan Bayh suddenly pull the plug on his re-election – leaving the Democrats scrambling to find an alternative? Because although he was favored to win in November, he knew it would be a tough fight – one where he might win with less than 60%. Former Republican Senator Dan Coats is aiming for a comeback, and everyone says 2010 will be tough for Democrats. Better duck and cover from a hard election cycle and be a lobbyist.

Which highlights the sheer hypocrisy of these “moderate” Democrats. They claim to be so pragmatic about knowing how to win elections, but shy away from putting up a fight that requires hard work. And if they lose, you don’t see them stay in the red states.

Take Harold Ford Jr. The son of a Congressman, Ford inherited his Dad’s safe blue seat in Memphis in 1996 – and was a conservative Blue Dog Democrat. In 2006, he tried to become the first African-American Senator from the South since Reconstruction. In that race, he did everything he could to spurn progressive values – supporting the Iraq War and an anti-gay marriage amendment, even attacking his Republican opponent from the right on a few issues. Pundits gushed that he was building in-roads with white voters.

But it didn’t matter – because despite running away from being a Democrat, Ford was swift-boated for being black. After Tennessee voters were subject to some of the offensive political ads that pander to racist fears, he might as well have been Al Sharpton or Jesse Jackson.

I respected the guy for at least trying to make history, and he still came very close to winning. One would hope that someone like that would stay in Tennessee, and run again so the Democrats could pick up another Senate seat. But I gave him too much credit.

Harold Ford moved to New York after the election, and took a new job as Chairman of the Democratic Leadership Council (DLC) – the corporate-funded entity whose aim is to move the Democratic Party more to the right. He also did commentary for Fox News.

Now a mere four years later, he’s planning to run for Senate in New York – in a primary challenge to incumbent Democrat Kirsten Gillibrand. A moderate Blue Dog Democrat herself, Gillibrand needs a challenge from the left – not from the right. Ford is a Wall Street Democrat who’s proving to be blatantly unfamiliar with New York. He says he’s been to all five boroughs in NYC, because his helicopter landed in Staten Island.

Running in a blue state for a seat that should be safely Democratic, Ford now says he supports gay marriage and has “always been pro-choice” – even though he said in 2006 that he had “never been pro-choice.” In other words, he’s proven to have no political scruples – motivated purely by a lust for elected office regardless of his positions.

I thought Democrats “needed” the Evan Bayhs and Harold Fords – as “moderates” who can help the Party expand in more conservative areas and maintain a majority. But what they’re doing now is purely destructive – and have proven that they can’t face a fight on the issues. Bayh has left Democrats hanging dry at the last possible minute, because he doesn’t want to get dirty – and Ford is shamelessly pandering to win a Senate seat.