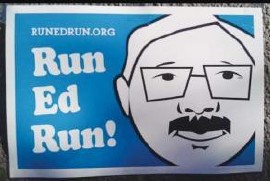 Mayor Ed Lee did not fit the legal definition of a “candidate” while “Run Ed Run” was spending thousands of dollars promoting him, the Ethics Commission ruled last night. And the volunteers who stuffed envelopes, walked precincts and held signs for that effort can help the official “Ed Lee for Mayor” campaign – now that he has jumped into the race. But Executive Director John St. Croix left open the specter that “decision-makers” behind the draft effort could be subject to charges of collusion – if they bring their “body of knowledge” to the official campaign. But where the Ethics Commission would draw the line as to who are and who are not “decision-makers” was left vague, and could only be determined through a subsequent investigation. The Commissioners acted like there was no precedent for this scenario, and it’s clear that the law governing independent expenditures does not anticipate it. But it happens all the time. In 1999, activists waged an effort to draft Tom Ammiano into the Mayor’s race – and then the same people ran the field effort after he became a candidate. Last year, State Senate Leland Yee spent over $1 million to win his uncontested race for re-election – when we all knew that consultant Jim Stearns would carry that “body of knowledge” to the 2011 Mayor’s race.

Ethics Commission Director John St. Croix sent shockwaves around San Francisco this weekend, when he stated on Friday that anyone who assisted the “Run Ed Run” campaign would be barred from getting involved in Ed Lee’s campaign for Mayor, once he entered the race. “Run Ed Run” may have had some high-profile donors, but it also had a robust field campaign of low-level volunteers.

“It is clear to me,” wrote St. Croix in a public Memorandum to the Ethics Commission last week, “that any personnel involved in the Progress for All Committee, including campaign staff, contracted staff or volunteers [my emphasis] would presumptively violate section 1.115 if Ed Lee were to become a candidate and Progress for All personnel become involved in the Lee campaign in any fashion.”

But what happens when someone is not a candidate, denies their interest in running – and so supporters come together to run an independent expenditure to draft him or her into the race? Once they have succeeded (and the committee’s purpose ostensibly no longer exists), can the same people turn around and work on the campaign? You would think they’d be the most enthusiastic supporters, and have a First Amendment right to do so.

St. Croix walked away from part of his letter at last night’s meeting, when the logical absurdity of a volunteer who may have shown up one Saturday to hold a “Run Ed Run” sign getting permanently barred from helping the Ed Lee campaign was exposed. He even admitted that Progress for All (the committee behind “Run Ed Run”) did nothing illegal – but what they did might become illegal if its key decision-makers get too involved in Ed Lee’s campaign, because they would transfer their “body of knowledge.”

The trouble is, who are the decision-makers that can’t get “too involved” in the official campaign – and where would the Ethics Commission draw the line? Are we just talking Enrique Pearce, the political consultant behind Progress for All? Would it include Rose Pak, who fundraised among Chinatown donors? How about the community leaders who served as co-chairs of the “Run Ed Run” campaign – like Gordon Chin, Shelley Braford Bell, Victor Hwang or Christina Olague? “My name has been sullied through the mud,” protested Olague during public comment last night – noting that while the press listed her as someone who might be barred, St. Croix had only communicated with Enrique Pearce.

Everyone assumed last night that what “Progress For All” had done was unprecedented – and some Ethics Commissioners wondered if it would ever happen again. But we forget that 12 years ago, another public official refused to run for Mayor and had to be swayed by a “draft” campaign – Tom Ammiano. Unhappy with the other choices, queer activists Gabriel Haaland and the late Hank Wilson set up a “Run Tom Run” campaign – where they tabled at street fairs, and produced their own buttons (all done independently, and with no coordination with the potential candidate.) After Ammiano jumped into the race, these key “decision-makers” played a central role in the official campaign’s field effort.

Granted, the “Run Tom Run” campaign did not spend a fraction of what “Run Ed Run” has spent. At last night’s meeting, St. Croix said independent committees that spend less than $1,000 are not required to register with the Ethics Commission. But it does show this case is not without precedent, and that maybe we should amend the law to regulate independent “draft” campaigns that target a particular individual for a public office.

The best argument for banning “Progress for All” personnel came from Jim Stearns –Leland Yee’s campaign manager – who spoke during public comment. “If you rule that Ed Lee was not a candidate [during the “Run Ed Run” campaign],” he said, “you will be giving me the biggest political loophole to get ahead, a massive evasion of campaign finance law.” All political consultants, he explained, would encourage their candidates to wait until the last minute to file – and spend months before building up name recognition by spending thousands of unregulated dollars in polling, campaign offices, and media.

Because that sounds a lot like what Jim Stearns did for Leland Yee – before his candidate filed to run for Mayor. In 2010, State Senator Yee faced token opposition in his re-election bid. But Yee spent over $1 million to win another four-year term – an easy race that made Stearns Consulting over $400,000 richer, according to campaign finance reports. Yee’s campaign can claim that the money was used for the Senate race, but let’s not kid ourselves. It was designed to build up his name recognition with San Francisco voters, so that he would benefit the following year when he runs for Mayor. One week after the State Senate race ended, Yee took out papers at City Hall for his mayoral run.