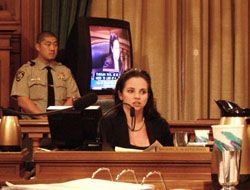 A proposed charter amendment that supposedly would improve the quality of those who serve in SF’s various “good government” bodies [ Ethics, Elections, Sunshine Ordinance Task Force, and the Ballot Simplification Committee actually serves to reinforce common prejudices against those who make mistakes and exhibit human frailty.

This charter amendment would punish people for what they did in the past, even though their past was not a bar to holding a city job or even appointive office. Though these city officials might now be serving with distinction, there is no forgiveness nor forgetting in this charter amendment.

One mistake is enough to make one a pariah.

Anyone who ran for public elective office within the past four years would automatically be removed from these offices if this measure got on the ballot and passed. Essentially, ALL the losers of the last election would be punished for losing by now also not being eligible to be on any of these bodies.

The ostracism continues. Anyone who lost a professional license would also automatically be removed from any of these bodies. As it is now, having committed a felony is not an automatic bar to holding office on these or any other appointive bodies. SO, this charter amendment would still allow convicted felons to hold office but purge any who lost a professional license.

This charter amendment tries to officially shun any who were losers in recent elections or whose lives reflect past failure to uphold high standards at all times, NO MATTER WHAT.

Where is the realization that humans are fallible, that rehabilitation is possible, that people recover?

Could it just be that many didn’t want to be reminded of frailty, lest they wonder how they would have reacted in such circumstances? That the solution was to banish the person who showed weakness, so as not to upset those who weren’t tested in that crucible of torment? Who amongst us hasn’t been tempted sometimes to cross the line of what’s appropriate behavior or retreated into some abusive behavior–of ourselves or of others?

This charter amendment takes this unforgiving approach. Anyone who ran an unsuccessful campaign or was earlier punished for their professional conduct is targeted for removal. They have become victims in this skirmish in SF’s Ethics Wars–where the powerful and the privileged clothe themselves in the language of righteousness to smear and punish those who want to uphold a higher standard of campaigning political; where those who strive for higher ideals sometimes show human frailty and fail but still get up and try again, and again, and again; where the Orwellian concept of “doublethink” is pervasive, and where those who are not powerful become victims in SF’s Ethics Wars.