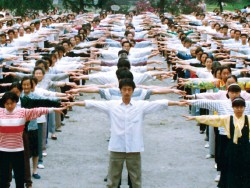 City elections chief John Arntz said he watched four videos of the voting place on Stockton Street and couldn’t see any illegal activity. “I didn’t see someone being forced to vote a certain way,” he said. “They came up right to the line, but … they didn’t cross it.”
— San Francisco Chronicle, Oct. 25, in the 26th paragraph of story

The San Francisco media establishment has relied on unverified allegations from a Leland Yee campaign staffer and quotes from a newspaper published by a religious cult to create a false narrative of voter fraud against Ed Lee. This latest reliance on unsubstantiated allegations to frame front page stories comes as – for the first time in San Francisco history – the city’s two leading daily newspapers (the Chronicle and the Bay Citizen, via its Friday and Sunday publication in the New York Times) has joined with the Bay Guardian in ongoing attacks against a single mayoral candidate. The editors of all three publications opposed Lee’s entry into the race, and have since given reporters free rein to run press releases as facts (recall the Chronicle’s two “illegal” Run Ed Run committee headlines prior to it being unanimously deemed legal by the Ethics Commission) and to allow the Falun Gong-run Epoch Times to dictate stories.

I laughed out loud two weeks ago when the Bay Citizen wrote an article saying how the San Francisco political establishment was lined up behind Ed Lee. The reporters seemed to forget that the city’s three most influential print publications have done nothing but bash Lee from the time he said he was considering running for Mayor, quite a curious way to treat someone allegedly controlled by “the establishment.”

It used to be that the backing of newspapers and the San Francisco Democratic Party meant that you were the establishment candidate. But the Bay Citizen, which has attacked Lee and Chinatown groups unceasingly since last December, has ignored this contradiction.

Ed Lee, like virtually every top candidate for San Francisco mayor in history, is backed by some powerful people. But no “establishment” candidate has ever been subject to intensive and ongoing attacks by the city’s three leading print publications.

Also on Monday, the Epoch Times, a newspaper critical of the People’s Republic of China and tied to the Falun Gong movement, reported that at an official Lee campaign event on Oct. 15, a Lee campaign worker told an elderly person with a vote-by-mail ballot to vote for Lee, watched the voter fill in the ballot and then put it in a box.

The Falun Gong is an anti-communist religious cult that makes no pretense of fact-checking. Few consider it a reliable news source. Yet the Chronicle allowed reporters to print the serious charge above without having any independent verification.

What’s next for the Chronicle? Claims reported by Lyndon Larouche’s group that Ed Lee backers stole ballots and filled them out? More “facts” from people working for other campaigns?

In that latter category, here was the Chronicle’s other source for its “scoop:”

Yee’s camp alleges that some residents at senior housing complexes turned their absentee ballots over to apartment managers and that residents at a separate complex seeking help filling out their ballots were first shown a video promoting Lee.

Andy Li, 20, a college student and part-time worker on Yee’s campaign, said residents at two complexes told him about the incidents while he was canvassing voters.

In a statement put out by Yee’s campaign, volunteer Tommy Lin said, “Many residents told me they didn’t even know who they voted for, because their ballots were turned over before they were filled out.”

Did the reporters feel obligated to confirm this charge with any of these residents? No. Did they even attempt to confirm such a serious allegation? I doubt it, because if they had they would have so informed readers.

So the Chronicle printed more unverified attacks on the Chinatown Community Development Center (CCDC), which manages the complex, based entirely—and I mean entirely—on the unsupported allegations of a campaign worker for Leland Yee, a longtime adversary of CCDC.

This is what passes for reporting in today’s San Francisco.

After all, when your goal is to bash the Mayor, actually confirming facts can take work. And even worse, kill your story when you find that none of the allegations are supported by evidence.

In the 2008 fall election, Republicans repeatedly charged the Obama campaign with using ACORN to engage in voter fraud. Ultimately, this came down to a person working for a group legally independent of ACORN (Project Vote) in Nevada who engaged in unauthorized illegal activities.

Barack Obama knew nothing about these illegal acts, which were not committed by his campaign. Yet John McCain and Republicans never stopped promoting the idea of widespread voter fraud, actual facts notwithstanding.

And just as the fraud charges against Obama related to electoral outreach efforts toward disenfranchised African-Americans, so does nearly all of the media attacks on Lee focus on voter outreach toward elderly, monolingual Chinese-speaking tenant voters. Meanwhile, the rich white men who contribute to independent expenditure campaigns for all major political candidates across the United States are not linked to anything illicit, and apparently are too powerful for media scrutiny.

In Obama’s case, Democrats knew that Republicans kept talking about fraud because John McCain was not doing well in polls, and frankly, they couldn’t win on the issues. But Obama did not have nearly all of the daily print media out to get him, and voters saw fraud claims as having nothing to do with Obama’s personal integrity.

The real question is why the city’s powerful media elite are so desperate to defeat Ed Lee that they ignore fact checking and base headlines on wild reports they make no attempt to verify. And why they continue to sit on negative stories about other candidates while devoting all their firepower to smearing Ed Lee.