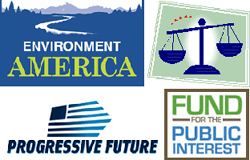 Next to the “Big Tent” housing bloggers and policy forums here in Denver is an unmarked suite where some of the nation’s leading environmental activists are at work. This is the office where Environmental America, Progressive Future, and the Progressive Future Education Fund are plotting what may be the biggest voter outreach and mobilization drive in environmental group history. While delegates, politicians and the press talked and partied, these dedicated environmentalists were contacting voters in 11 key states, in a scene reminiscent of a week before an election than a contest more than two months away. The combined effort of these groups will not only recruit tens of thousands of new volunteers, but they will engage in the type of intensive door-knocking and persuasion strategies that could swing key states to Obama and give Democrats a 60-vote, filibuster-proof Senate majority.

Despite polls showing increased concern over global warming, environmental issues were barely mentioned in the presidential debates and have remained off the political radar screen for November. But a coalition of environmental groups is working to change this, and has embarked on an ambitious agenda to win a “working political majority” for environmental and other progressive issues.

The above groups are implementing a multi-prong strategy that includes nonpartisan voter registration of African-Americans in ten states with high numbers of blacks, partisan voter registration, persuasion, and get out the vote efforts in eleven key states, the recruitment of tens of thousands of volunteers who themselves will recruit others, and likely Oregon and North Carolina.

This is quite an ambitious agenda. One question I put to both Wendy Wendlandt, Political Director of the Public Interest Network, and Margie Alt, Executive Director of Environment America is whether the potential volunteer pool had already been claimed by the Obama campaign. After all, between the Obama fellows and the multiple offices in each state, one would think anyone looking for an entry point to volunteer would already have a place to go.

But both emphasized that many people feel more comfortable working through an environmental group than through a political candidate’s campaign. And Environment America (EA) has a membership base that would more likely do their electoral work through their own organization. The conclusion: environmentalists, particularly those angered by the prospect of offshore drilling, are still looking for a place to make a difference, and could soon be joining EA’s electoral operation by the thousands.

Bolt Alt and EA political director Ivan Frishberg see voter interest in environmental issues heightening despite their absence from the mainstream political debate. They saw the offshore drilling issues as galvanizing environmentally-oriented voters, some of whom may not be swayed to Obama on other issues.

I asked Alt if there were not a risk that their efforts would simply duplicate the voter contacts made by the Obama campaign (not to mention potentially MoveOn and the Sierra Club). She said studies showed that some undecided voters need to be contacted seven to eleven times, and that the Obama campaign “could not be everywhere”—a conclusion that those unable to speak directly to voters despite repeated calls and door knocks can attest.

Since EA’s focus will include infrequent voters regardless of their environmental concerns, having the group’s intense persuasion efforts occurring in eleven key states could prove pivotal. The group is likely to decide by the end of this week to expand their Senate focus to Oregon and North Carolina, races that decide whether Democrats obtain their 60-vote majority.

No race appears more important for environmentalists than the Oregon Senate race between incumbent Republican Gordon Smith and Democrat Jeff Merkley. According to Jeremiah Baumann, Director of Environment Oregon, “Oregonians care more deeply about the environment than in prior elections, and Merkley is very strong on the environment.”

Smith also has a strong environmental record—if one only looks at how he voted in 2008 as opposed to his pre-election year stands. This is a guy who won election vowing to oppose Alaska drilling and then voted in favor of it after taking office.

Should Environment America decide to push Merkley, the increased resources could spell the difference in what is expected to be a very tight race.

Colorado Up for Grabs

Colorado is a major priority for the Public Interest Network and its environmentalist partners, and they hope to get Mark Udall supporters into the Obama camp. Everyone I talked to was cautious about Obama’s prospects, in contrast to my own optimism that Latino votes would put him over the top.

Colorado is such a priority that key national staffers like Wendlandt have relocated to Denver for the election. The state has not gone Democratic in a presidential election since 1992, and that was attributed to Ross Perot siphoning off Republican votes.

If environmental groups can help bring Colorado into the Obama column, 2008 may be the last presidential primary season when green issues are kept out of sight.