by Tommi Avicolli-Mecca on September 8, 2008 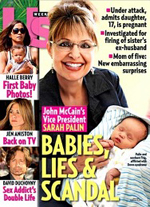 I’m sick to death of Sarah Palin. It’s less than a week since she spoke at the GOP (God-Obsessed Party) convention in St. Paul and already I just want her to shut up and crawl back under the Alaskan rock she was found under by John I-can’t-remember-how-many-houses-I-have McCain. That is, if one of Palin’s oil company buddies hasn’t already drilled under that rock.

I was better off when I didn’t know about the first-term governor of our most northern state who’s allegedly going to bring the Republicans into the 21st Century, at least in terms of women and the next-to-highest office in the land.

For those who might have been living under their own rocks lately, Palin is the vice presidential candidate McCain chose in order to appear hip and feminist. Too bad he picked a woman scarier than Dick Cheney. Does she have a lesbian daughter, too?

Palin is a gun-toting NRA member who hunts and kills innocent moose, and supports drilling in the Artic. She’s a right-wing christian who goes to a church that sponsors anti-gay gatherings, and who believes that creationism should be taught alongside evolution. She supports banning books. She’s anti-abortion. She’s anti-gay marriage, but supposedly has gay friends (who doesn’t these days?). She’s the mother of a pregnant teen who’s not married.

Now before anyone says, “Aw, don’t pick on the kid,” I will say this: Mommy taught her well about abstinence, didn’t she? Another fundamentalist success story! As always, “Just Say No” works as well as “No Jaywalking.”

It’s the hypocrisy and the blatant racism that makes me sick to the stomach, not the fact that Bristol (was she named after the drug company?)went out and got herself knocked up.

The christian right has spent decades bashing teen moms, especially when they are black and/or poor. It has characterized these girls (never the boys, though it takes two to make the tummy swell) as destroying the moral fiber of this country, taxing the welfare system, and setting a bad example for other young people.

I’m glad the right has finally realized that pregnant teens are a fact of life. Maybe they should admit that with a little sex education (especially about contraception), there wouldn’t be another bun in the oven in the Palin household. Abortion’s not an issue if a little latex is used.

If Palin’s nomination is progress for women, then the better sex is in a lot of trouble. Saying that Palin advances women’s rights is like saying that those fundamentalist preachers who got caught with their pants down with male hookers promoted gay rights. Or the mafia sets a good example for Italians.

Palin is a distraction from the real issue: Republicans such as Palin have raped and pillaged America for eight years. Their buddies have made huge profits while the rest of us have stood in longer and longer unemployment lines, lost our homes, died in illegal and immoral wars, been forced to live on the streets, worked our butts off in minimum-wage jobs and generally found no safety nets when we were diagnosed with an expensive illness.

Aren’t Palin’s 15 minutes over yet?