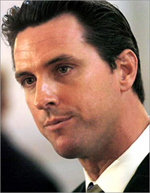 By now, it’s made news all over the world: a seemingly contrite San Francisco Mayor Gavin Newsom took to the confessional box on national TV and apologized for his affair with his campaign manager’s wife. They had the fling while she worked for him as appointments secretary. Apparently she spilled the beans to hubby as part of her recovery program. Hubby rushed over to Newsom’s office to resign his post. It was all very Days of Our Lives.

The televised apology lasted two minutes. It didn’t deserve that much time. Let’s be real. Newsom broke no law in sleeping with an aide. According to reports, the pairing was consensual. Both are adults. Where’s the story?

It’s sex. Americans are obsessed with it. If something doesn’t have sex or violence, it doesn’t sell. Forget James Baldwin or James Steinbeck, give us Harlequin romances. Forget Masterpiece Theatre, give us scantily clad, big-boobed, barely legal blondes in a weekly sitcom. Just don’t taint our politicians with any of that. They’re supposed to be pure and sexless. Devoted to their wives and families, not to mention truth, justice and the American way.

Gavin doesn’t have a family. His picture-perfect wife left him. After only three years among us mere mortals, the couple that was dubbed the new Kennedys, living blissfully in their own version of Camelot, faded into oblivion. Gavin took comfort in the arms of his best friend’s wife. It’s an all-too-familiar story. Hardly a shock in a state where the divorce rate is 60%. And the Christian right says that giving gay couples the right to say I do will destroy the sacred institution of marriage. From what I can see, it’s been in shambles for a long time.

The tabloid questions are already being asked: Will this torrid affair bring Newsom down? Does it spell the end of his career? Doubtful. I suspect San Franciscans will be bored with it all in a few days. In a city where nudity and outrageous sexual antics are a daily occurrence, it’s hard to imagine that an affair with an aide is any big deal.

I think most of us are more concerned that the mayor has done nothing about the high number of killings in the city, not to mention the complete lack of affordable housing.

I’ve never been a fan of Gavin Newsom. There wasn’t much to like when he was a supervisor. He voted against tenants at every turn. He sided with developers against the little guy. His bid for mayor was more about downtown needing a champion against the growing grassroots movement that propelled several progressives onto the Board of Supervisors in 2000. The Chamber of Commerce and other right-leaning, pro-money interests didn’t want us to have a friend in the mayor’s office. They ran their heavily financed campaign with a vengeance. It worked. Even here in San Francisco, money can buy an election.

In the three years that he’s been in office, Newsom’s only done one amazing thing: He issued marriage licenses to queer couples. I have no doubt that it was all a PR gimmick to increase his popularity (it worked!), but the sheer defiance of law and order by all those couples tying the knot tickled my Anarcho-Socialist heart.

For three years, I’ve been a steady critic of the mayor. But in this instance, I say leave him alone. Everyone should get their noses out of Newsom’s crotch.

Tommi Avicolli Mecca is a radical, southern Italian, working-class queer performer, writer and activist whose work can be seen at www.avicollimecca.com.