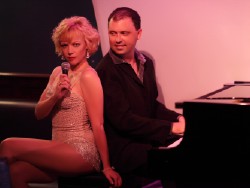 EMILY BERGL IS A DREAM

No wonder they wanted her on the TV show Desperate Housewives. She is one of those rare talents – she CAN act. Yes, they let her die on “DH”, but who knows, she may make a comeback as her twin sister. That would certainly stir up the neighborhood. Can’t you just see the “Housewives” chit chatting about that? “The producers of “DH” are talking about bringing me back. It will be a dream sequence” – she told me. I like the twin sister idea better, she might be in more episodes that way.

What is Bergl up to now? “I’m lucky to be in Hawaii. When I left New York it was in the high 100’s. I just love the weather in Hawaii. It’s Gorgeous” – she gushed. She is in Hawaii, on the set of Hawaii Five “O”. Can’t wait to see her in that. However, Bergl is returning to San Francisco by Popular demand this weekend (Sunday Evening) at the delightful, sexy Rrazz Room. Bergl is excited: “I love the San Francisco audience. That’s why I’m coming back.” – she said.

I’m telling you — Bergl is fun to talk to and so friendly. After the shows she hangs around to meet and greet people after a show stopping evening of dazzling standards…some upbeat and terrific moving love songs. Bergl does a little dancing, mugging and charms the audience. She would be just perfect on Broadway in “Sweet Charity”.

Yep, Bergl can be evil and conniving in Desperate Housewives. On the stage she is a movie star in a 30’s movie when she sings songs like “Mad About The Boy” (Noel Coward). And, I’ll never forget “Dream A Little Dream of Me” – she was breathtakingly impressive. Hope she sings that again this weekend. This time around, she has more instruments on the stage in addition to the wonderful G. Scot Lacy (Piano). Bergl is bringing some new material she says: “I have a great song about Dorothy Parker that has never been heard before. Also I have a Judy Garland song from when she was young and a I’m going to sing a song from the Dietz and Schwartz song book.”

Bergl leaves a huge impression during her shows. She is full of spirit as she delivers emotionally charged songs. I’ll tell you what – no other singer delivers with more poignancy and genuine emotion like the multi-talented Bergl. She has great command over the instrument that is her voice. Truly one of the best vocalists of all time, and that applies to her acting talents as well.

Emily Bergl will be at the Rrazz Room on July 24, 2011 at 8pm (One Night Only) so get your Tix early – it’s close to selling out. http://www.therrazzroom.com/

Here are the things that are wrong with this movie: There are two many unnecessary flashbacks. There is not a coherent plot and the story is boring. Whatever message the film is trying to convey just doesn’t cut it. Actually much of the stuff in the film should have been left on the cutting room floor. To say the least, I was disappointed. My expectations were high – but they were soon deflated. Talk about cut and paste. That’s what you’ll see.

Based on a true story – the movie tells a tale of a father (Christopher Plummer) and a son. The Father is Gay and comes out only after his wife dies. The Son was aware that his Dad was Gay all along. So, there was no surprise. The son (Ewan McGregor), who is not Gay, manages to accept his Dad being Gay.

There are many words spoken in this movie – but nothing really leads us to anything new or surprising. The conversations really don’t lead us anywhere as it jumps back and forth to the Mother and the Son in flashbacks that are really meaningless. The entire family is quirky. Interesting to a point but dull conversations.

Let me tell you. This movie is a failed attempt to show emotional love. There just ain’t any! I’ll tell you who the STAR of the movie is. It’s the Dog (Arthur). He is just the cutest thing in the movie – and he keeps the movie rolling along. There has been a lot of hype about the movie and how great it is. One reviewer in SF even gives it the “Clap” … if you know what I mean. What he saw on the screen eluded everyone else at the screening I attended. Well, you can’t win them all.

The Actors for the most part are really very good, except the French Actress who plays the maybe-yes and maybe-no love interest, with the Son. She acts like she’s on some kind of drug. Someone directed her way off base. The performance was so contrived that you almost want to throw up. The people are beautiful – but the Dog definitely is more fun to watch. You know that you are watching the wrong movie, when The Dog will probably get the Academy Award.

Sorry – this Indie Flick just doesn’t make it. I felt cheated. I’m sure that the audience would like their money back. Thank God for Arthur the Dog. He even has his own subtitles.