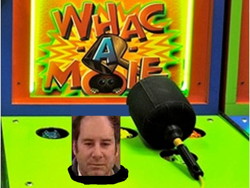 (Ed Note: On June 8, 2004, Dean Preston wrote “Wave of Ellis Act Evictions Hits North Beach,” which detailed a mass eviction scheme by Gary Rossi and W.B. Coyle. Here is an update and cautionary tale provided by an investor victim, whose raw emotions are captured in this piece)

It wasn’t actually Gary Rossi running the show for North Beach Partners LLC (NBP) back in 2005 in regards to 424-434 Francisco. The actual mastermind/puppeteer was managing member WB Coyle, broker and owner of Telegraph Hill Properties (THP). Coyle and Rossi are 50/50 Partners in NBP. There is such a wide swath of destruction by this duo and their attorney Paul Utrecht, it is truly unfathomable. What happened with 424 Francisco? This is only one story of one building. Today, you could have a similar story on any of 20-30 former Coyle tainted buildings. There were multiple buildings in which Coyle lost massive amounts of investor money AND evicted long term SF citizens/tenants, all while filling the pockets of his attorneys at Zacks and Utrecht as well as the banks who provided these loans on speculative deals.

These banks were First Republic Bank(FRB) and Trust Deed Investments (TDI). Dyann Tresenfeld was the loan officer at FRB who assisted Coyle in most of his deals with FRB and is now a Vice President at FRB. Adam Kahn is Coyle’s contact at hard money lender TDI, with the current loan on the property.

The law firm of Zacks and Utrecht performed the evictions at 424 Francisco immediately after the original purchase in 2002. In December 2011, Andrew Zacks and Paul Utrecht dissolved their partnership. This was most likely due to the tension created by WB Coyle and his bizarre behavior, being sued by numerous former investors, and numerous bankruptcies precipitating the collapse of the Coyle house of cards.

If you had walked by 424 Francisco Street for a 7- year period of WB Coyle ownership you would have seen it boarded up and all the units gutted to the studs. Several times over the years homeless persons managed to gain entry and set up temporary housing in the gutted units. All the while WB Coyle made huge monthly mortgage payments to First Republic Bank at the expense of his victim investors.

Coyle was unable to finish the project after using up all the investors money in several LLCs by the names of WBGT LLC, Cydonia Partners LLC, Above Water LLC and Gracenote LLC. NBP was 50/50% profit sharing partner in each of the LLCs. These silent investors were on the hook for over approx $800,000 in losses and they have yet to receive any K-1’s needed in order to file their Federal Income tax returns.

In August 2009 Coyle sold the property with the existing FRB loan in place via a wrap note to an investor group (Serious ADD LLC) formed by Cecil Chan. At closing, Coyle, through NBP, pocketed approx $600,000 without notifying the other silent investor LLC members in the above Coyle named LLCs.

Coyle, through THP, also received a 5% commission on the sale ($135,000). It appears that Coyle failed in his fiduciary duty to provide WBGT, Above Water, or Cydonia LLCs with their K-1s and financial records. No books, no documentation, no return on investment. Coyle did ensure that one of the 4 original LLCs was paid off. The lucky investor was Gracenote LLC, which was paid $225,000 at closing.

After closing, Coyle and Chan ended up in an 18-month dispute regarding the approval of a necessary garage permit and construction of the project. During this dispute, the property continued to sit idle and gutted with no progress. Chan, out of cash, could not continue to make payments, Coyle filed Notices of Default in 2010 and subsequently foreclosed on the property in Feb 2011. Chan lost his almost one million dollar investment in the project.

Immediately after the foreclosure, in Feb 2011, prominent SF real estate developer Dan Lee and a few other investors purchased the property under the name of Phoenix Rabbit LLC. Dan Lee with his construction team were on track to bring the project to fruition almost 10 years after the nightmare began for the original tenants and investors.

There was one catch. THP realtor Erin Thompson who brought Dan Lee into the latest purchase, left THP with Mr Lee and the other investors and listings for the sales of the building to her new Broker Summit Real Estate. Mr Lee had tried to meet with Coyle in fall of 2011 on numerous occasions to discuss the idea of THP listing the 6 units.

But Coyle refused to show up at any meetings with Dan Lee. Why? Coyle told Dan Lee he could not meet with him to discuss the listings because he was extremely worried about his location being compromised and being served with more than 5 outstanding lawsuits against Coyle and his various LLCs (see list below).

THP had listings at another Dan Lee project on Bush Street. Coyle was served with a lawsuit at that location during an open house this summer and subsequently refused to show up for any more open houses to avoid service of other outstanding lawsuits. In addition to Ms Thompson, every single employee of THP, except one (Venetta Barzakova), left the office. This exodus included other realtors, bookkeepers, and his longtime contractor. Coyle then hired a former unemployed cab driver by the name of David Gladstone to assist in the retribution of Ms Thompson.

After Ms Thompson left THP, Coyle and Gladstone began a picketing campaign of several of Ms Thompson open houses with signs that said “Summit Real Estate Agents Erin Thompson and Justin Delano are thieves.”Due to continual harassment by the picketers, Ms Thompson filed a restraining order against Coyle and Gladstone with SF Superior Court. CCH-11-572687. A hearing was held on December 16 2011.

WB COYLE and David Gladstone were represented by attorney Tad Devlin of Gordon and Rees. The court ordered a 3 year 100 yard stay away order against Coyle, Gladstone and any of their agents. This is the second Restraining Order field against Coyle by a female victim. Coyle is also named as a defendant in a lawsuit at SF Superior Court. CGC-10-505511- that alleges on page 35 line 22: “engaged in a conspiracy to commit sexual assault against plaintiff”. In a 3rd case Coyle was ordered by the judge to stay away from another female victim in case CGC-06-45728. This appears to be a very scary patter of behavior by Mr. Coyle.

The bizarre series of events and almost delusional actions, by a licensed California Real Estate Broker, picketing these open houses backfired. Coyle brought unnecessary attention to himself from the rest of the real estate community. Many large Real Estate Firms held meetings about Coyles picketing of the Summit properties. Many agents then refused to show their clients any of THP listed properties. Coyles loss was Summit/Ms Thompson’s gain. Summit received immediate positive feedback from the rest of the real estate community and within 30 days of listing the Francisco property, Summit had all 6 units in contract!

However, Coyle, always managing to keep some type of control in all his deals, had an approx. $300,000 second mortgage on the property. This $300,000 was to be distributed evenly to WBGT, Above Water, and Cydonia LLCs. With all the units ready to be sold, Coyle refused to sign the escrow docs which prevented any of the units from closing and from his silent investor LLCs to recoup a pittance of their original investments.

With the assistance of attorney Paul Utrecht, Coyle, under the guise of Gracenote LLC, filed a lawsuit against rescissionDan Lee and Phoenix Rabbit LLC for rescission of sale. In addition, last thursday Coyle/ THP also sued for commissions due on the sale of the 6 units. Now that trisection has been filed, TDI will not get repaid for their outstanding loan. They are becoming very impatient and have other cross collateralized loans on other solely Coyle owned properties including Coyle’s flat pad at 10 Reno Place (5+ units), THP offices at 1427 Grant Street (3 units), and Coyle’s first SF building at 1401 Kearny/400 Union (10+ units). Notices of Default have been filed against all three properties

This second lawsuit was filed without attending mediations per the original contract.

Back to Gary Rossi … Rossi and Coyle entered an approximate 2 year battle over control of NBP. During that battle, Rossi went on to buy three other buildings in Pacific Heights and Presidio Heights with his new realtor of Hancock Properties. All three buildings ended up with litigation and more massive losses for ALL the investors, including Congressmember Nancy Pelosi’s son, Paul Pelosi Jr.

There was a large judgment against Rossi and he entered bankruptcy protection.
BK petition # 09-32127 Seeking Chapter 7 Protection

Everyone thought it was over between Coyle and Rossi, but when Coyle’s staff exited en masse from THP, Rossi was back in the picture again with Coyle trying to salvage the mess created by Coyle right down the street from 424 Francisco, 581-591 Francisco. This is another building in which investors have lost over 1 million dollars. Rossi has been presiding over the remodeling of the units. It presently sits idle….

So far only 3 of Coyles LLCs have declared bankruptcy:

These are the current lawsuits WB Coyle is involved in:

In addition there have been numerous complaints filed with the CA Department of Real Estate against WB Coyle and THP.

If you would like to do business with THP or WB Coyle, his offices are located at 1427 Grant Avenue in San Francisco.