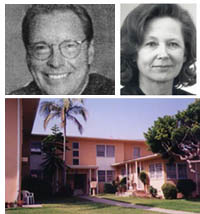 The media has widely reported the surprising election defeat of veteran Los Angeles judge Dzintra Janavs, a loss attributed to her having a foreign-sounding name. Governor Schwarzenegger has vowed to remedy this perceived injustice by reappointing Janavs to the Superior Court bench. But as is often the case with the Governor’s crusades, there is more to this story. As first revealed in the Los Angeles Daily Journal, Janavs was a notorious anti-tenant judge whose rulings sought to facilitate the mass eviction of Lincoln Place tenants under the state Ellis Act. It is great that tenants came together to defeat an anti-tenant Republican judge; while many are cheering Judge James Warren’s retirement today, one wonders why San Francisco progressives have not backed challengers to him and other judges hostile to tenants.

The story fit so perfectly with the times that even the national media could not resist it: a hard-working veteran judge surprisingly defeated by a political neophyte solely because of her foreign- sounding name. But like the media myth about Private Jessica Lynch’s heroic resistance to her Iraqi tormenters, the truth about Superior Court Judge Dzintra Janavs’ defeat has finally emerged.

While media accounts noted that Janavs was a Republican, and that her Democratic opponent used that against her in the campaign, what was not disclosed was her strong anti-tenant bias. As fellow Republican and former Lincoln Place tenant Jan Book told the Daily Journal,

Janavs’ position is that landlords have the right to do anything they want
with their property. (She) is a very qualified judge from a technical stand-
point. But her behavior in the courtroom is belittling. We have to stand up
and say this is not what we want in our system.

Tenants spurred a vigorous e-mail campaign against Janavs’ and in favor of her opponent, Democrat Lynn Olsen. Olsen hammered on Janavs’ Republican background while the tenants helped give voters a concrete reason to toss her out.

Janavs’ presided over a lawsuit by Lincoln Place owners seeking to overturn the state’s granting of historic status to the property. This status would have prevented the demolition of the apartments, undermining the owner’s economic motive for invoking the Ellis Act.

But as tenants told the Daily Journal, Janavs decided before she heard any legal arguments that she would allow the owners to develop the property. One attorney noted that many attorneys would rather have cases her in San Diego than before Janavs, given that the defeated judge “did not believe that tenants had significant property interests.”

This should sound familiar to San Francisco tenants, who have seen several tenant protection measures thrown out by Republican judges on strictly ideological grounds.

Fortunately, James Warren , San Francisco’s most ideologically-driven anti-tenant judge, retires from the Superior Court bench this week. Warren made sure to throw out the city’s gun ban before he left, having previously thrown out a ballot initiative signed by 20,000 voters to prevent the demolition of Trinity Plaza in a ruling that conflicted with every prior reported case.

Like Janavs’, Warren allowed his personal views of landlord-tenant relations to govern his legal rulings. But neither Warren nor other of San Francisco’s overtly anti-tenant Republican judges ever face judicial challenges in our heavily Democratic, pro-tenant town. Why?

Most attorneys do not get appointed judge without political connections. And these connections mean that they can raise ample campaign budgets, and secure broad support in the legal community sufficient to scare off potential challengers.

There were a number of San Francisco judicial races in the 1990’s where Democratic politicians endorsed Republican judges, despite having a Democratic challenger. Sadly, San Francisco’s judiciary has become an old boys and girls club, where everyone stands together against potential challengers.

What’s astonishing about San Franciscan’s toleration for a Republican-dominated judiciary that thwarts progressive policies is how angry locals get over Republican control of the federal judiciary, particularly the Supreme Court. Superior Court judges do not have the power of their federal brethren, but their rulings still impact all of San Francisco and can influence legislation throughout the Bay Area.

What judges like Janavs, Warren, and current Judge Robertson have in common is the fierce belief that landlords should be free to do what they want with their properties. Of course, these judges would be up in arms if their next-door neighbor applied this theory to open a nightclub, or replaced their house with a highrise building, but the concept of people being free to do what they want is only applied selectively to tenant protection laws.

Lincoln Place, located in the Venice area of Los Angeles, was the subject of one of the landmark Ellis Act rulings that helped reinvent the original law. The case emerged when the landlord—the AIMCO corporation, which recently settled a multimillion dollar habitability action brought against it by San Francisco for its failure to maintain properties in Bayview —applied to demolish a portion of the 52-block 795 Lincoln Place apartment complex (they subsequently sought to demolish all units). After the demolition application was denied by the city of Los Angeles, AIMCO invoked the Ellis Act, arguing that this preempted the city’s ability to halt the demolition.

Los Angeles argued that 1) the Ellis Act had not been properly invoked, since all of the 795 units had not been withdrawn from rental use and 2) there was no preemption.

Unfortunately, the Court of Appeal rewrote the Ellis Act to rule against Los Angeles on both grounds. Most ominously, the Court found that although the Ellis Act specifically stated that it did not preempt land use laws, that laws restricting demolitions did not involve “land use.”

This ruling paved the way for subsequent rulings that allowed Ellis to preempt a whole range of what appeared to be land use laws, including San Francisco’s Residential Hotel Ordinance.

The Tenderloin Housing Clinic and Western Center on Law and Poverty worked with Senator John Burton to enact legislation overturning the Lincoln Place ruling re demolitions in 1999, and also made it clear that cities could regulate conversions of rental housing to non-residential use. But this law passed too late to help the long-suffering tenants of Lincoln Place.

Hats off to the Lincoln Place folks for getting some measure of revenge against a judiciary that twists the law to promote real estate speculation over justice. To get the latest update on their fight to save their homes, go to http://www.lincolnplace.net/