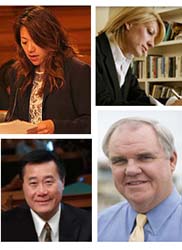 Amending the Ellis Act became the most prominent issue at yesterday’s candidate forum, sponsored by Senior Action Network (SAN). The event allowed senior citizens to ask candidates important questions pertinent to their lives, and it appeared evictions were front and center.

Fiona Ma, candidate for State Assembly, along with Leland Yee and Lou Papan, candidates for State Senate, received withering criticism from the crowd due to their refusal to take a strong stance against the Act. A representative for Ma faced criticism from the crowd first. Both her opponent, Janet Reilly, and Ma were asked if they supported amending the Ellis Act, and Ma neglected to take a position. Her representative stated, “she supports homeownership opportunities,” and that she still believes the Ellis Act is an effective way expand homeownership in San Francisco. The audience seemed disheartened to hear this response, and said they would like to see policies put into place that protect seniors from evictions.

Both Ma and Janet Reilly were unable to attend because they were at a press conference. Reilly’s representative made clear that she shares the same attitude and concerns about the Ellis Act as the seniors do, and wants to see it eliminated.

Assemblyman Leland Yee sent a spokesperson as well, but he too was indecisive regarding the Ellis Act. Apparently, he will only support restrictions where concrete discrepancies have been recorded. However, his representative stated that all major tenant associations endorse Yee, including the San Francisco Tenant’s Union.

“We don’t want seniors living in the streets!” said one man. “Pass that along.”

Executive Director of SAN, Bruce Livingston, said that the Ellis Act along with medical care are the most pertinent issues to seniors.

“We want to see the Ellis Act repealed or drastically amended,” said Livingston.

Lou Papan, a Democrat running against Yee for the state senate, said that he would not support any restrictions to the Ellis Act.

“We just need to increase housing and we won’t have these problems,” said Papan.

John Melone of the Senior Housing Action Committee has begun organizing to prevent any further displacement of senior citizens due to the Ellis Act. Melone want to work with banks like Bank of American and Wells Fargo to stop them from giving loans where the Ellis Act is used.

“This is officially our biggest issue,” said Melone. “When we went to the banks they didn’t even know what the Ellis Act was.”

They will kick off the project on June 2, when social security checks are sent because that is a big business day for banks. They would like these banks, amongst others, to give their word in writing that they will not loan out money for Ellis Acted buildings.