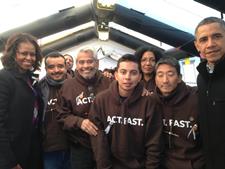 In my September 30 tribute to Eliseo Medina’s legacy when he retired from SEIU, I said he “is retiring from his job, though not from immigrant rights activism.” This has become clear as Medina and other activists have held a Fast for Families on the National Mall in Washington, DC. The President, Michelle Obama and Valerie Jarrett all visited Medina and the other fasters on November 29, bringing needed national attention to House inaction on immigration reform. I discuss the strategic use of fasts by both Cesar Chavez and Eliseo Medina in my book on the farmworker movement and its legacy, and the 67-year old Medina’s current fast harkens back to Chavez’ Arizona fast that spawned the Si Se Puede UFW rallying call.

Medina knows the fast will not sway Speaker Boehner, but recognizes the action can transform public consciousness about the urgency of immigration reform. And for a media that has given much more coverage to technological delays caused by a deficient website as to Boehner’s intentionally delaying a vote on immigration reform, such transformation is vital.

When I heard that Eliseo Medina was planning a fast along with other immigrant rights activists, my first thought was his age. Fasting at 67 can be life threatening, and many believe Cesar Chavez’s life was cut short by damage caused by his late in life fasts.

My second thought was more pragmatic: should Medina be risking his life for a fast that was unlikely to win a House vote on the Senate immigration reform bill? But I think recent events have showed the wisdom of Medina’s decision.

The sad fact is that the traditional national media has failed to pressure House Republicans to hold a vote on immigration reform. As noted above, it has been far more focused on spinning a false narrative about health care reform.

Consider: immigration reform is a matter of life and death for millions facing deportation at any time. A delayed health care website puts nobody’s life, or even health, at risk.

There is a parallel between the media’s troubling coverage of the two issues: the eight to twelve million impacted by immigration reform are primarily Latinos, while the little told story of the five million Americans denied health care not temporarily by a website but permanently by a Republican Governor are disproportionately African-Americans.

Activists Did Everything Right

I have found that regardless of how uphill the battle, many always blame the activists pushing for change for it not being achieved. Mistakes are identified, wrong steps are highlighted, and history is written to absolve the political system of failing to implement social justice.

Had the immigrant rights movement just folded up its tent and conceded defeat in 2014, activists would be blamed them for the outcome. The movement would be accused of a) focusing too much on the Senate, b) putting too much faith in Obama, c) not doing sufficient groundwork with Boehner, or d) all or some of the above.

That’s one reason the Fast for Families is so important: it reminds us that activists did not fail, a political system that failed to secure immigration reform did.

I argue in my new book, The Activist’s Handbook, Second Edition, that the immigrant rights movement was too willing to sacrifice its agenda for Obama’s in 2009. But by the fasts and other actions the movement has laid the groundwork for a cautious President to take the unilateral action necessary to protect millions from deportation while House Republicans fiddle.

And the movement has also prepared millions to protest directly against the President should he fail to take such action.

Randy Shaw is Editor of Beyond Chron. His book on the farmworkers movement, which highlights Eliseo Medina’s accomplishments, is Beyond the Fields: Cesar Chavez, the UFW and the Struggle for Justice in the 21st Century