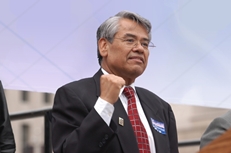 Today is Eliseo Medina’s last day as the Secretary-Treasurer of SEIU International. Medina is retiring from his job, though not from immigrant rights activism, after nearly fifty years working for social change. Medina helped expand Latino union membership, and increased Latino voting and political empowerment. He secured SEIU resources to implement Latino voter outreach strategies that effectively changed the course of national politics, and played a leading role in broadening a network of immigrant rights groups into a national labor and church-backed movement.

Medina’s activism began in 1965 at age 19 as an organizer with Cesar Chavez and the UFW. He was trained by the legendary Fred Ross Sr., who also mentored Chavez. Seen by many as Chavez’s successor, Medina abruptly left the UFW in 1978 over concern with the group’s direction. His departure began a mass exodus of the UFW’s key organizing talent, whose future endeavors became the subject of my previous book, Beyond the Fields. Medina’s legacy has parallels to Chavez, whose later failures left some to wrongly downplay his historic achievements. In Medina’s case, his support for SEIU President Andy Stern’s takeover of the California-based SEIU-UHW in 2009 and his refusal to publicly oppose Stern’s attempted seizure of UNITE HERE also that year alienated some of his former admirers into adversaries. Yet as with Cesar Chavez, Eliseo Medina’s rich life must be evaluated over the course of his career. Medina is among the most influential social change activists of his time, and his story should be known.

In today’s United States, labor unions and Latino voters are two key pillars of progressive politics. Yet when Eliseo Medina worked for the UFW from 1965-1978, the situation was very different. The UFW was the only union that prioritized grassroots electoral outreach, and among the few groups focused on registering Latino voters and getting them out the vote.

Medina would play a key role in expanding this UFW model nationally, and through the broader labor movement.

Historically, organized labor was a powerful opponent of immigrant rights. The predominately white movement saw Latino immigrants as threatening their jobs, and—strange as it sounds now—there was a prevailing wisdom that Latinos would not support unions. Having worked with the predominately Latino farmworkers of the UFW, Eliseo Medina set out to change this. Working with his close ally and former UFW colleague Miguel Contreras, and with then UNITE HERE President John Wilhelm, the trio got the AFL-CIO to switch to supporting immigrant rights in 2000.

Prior to 2000, many Latinos did not feel at home in the labor movement. And while many joined with Medina in changing this perception—including his fellow UFW and SEIU alums Miguel Contreras, Stephen Lerner and Fred Ross, Jr.— Medina’s position as International Vice-President of SEIU enabled him to play a pivotal role.

Medina saw opening the labor movement to Latinos as involving political empowerment in addition to union membership. He used his position at SEIU (where he began in 1986) to win resources for Latino voter outreach, relying on methods learned from UFW electoral campaigns in the 1960’s and 70’s. Miguel Contreras brought this voter outreach strategy to Los Angeles when he became head of the city’s labor federation in 1997, and Medina had worked with Contreras in building Los Angeles’ Latino voter clout.

Medina expanded the Los Angeles model for Latino voter outreach to Colorado and the Southwest in the 2006 national elections, securing key victories for pro-immigrant rights candidates. He formed the Mi Familia Vota organization to promote Latino voter registration and turnout in Colorado, Florida and other key swing states. This is where Latino votes gave Barack Obama the White House in both 2008 and 2012.

This labor-funded and led Latino voter outreach effort explains why Latino voting increased so much in California, Colorado and other states while not meaningfully rising in Texas, where the absence of labor unions limited voter registration and efforts. Medina led a huge organizing victory in Houston, but never succeeded in turning Texas blue.

Medina also played a central role in the building of the immigrant rights movement. As I discuss both in Beyond the Fields and in my new book, The Activist’s Handbook, 2nd edition, key to the movement’s growth was securing labor and religious community support. Medina brokered the peace agreement with Los Angeles’s Cardinal Mahony (who had been alienated from labor over a dispute over cemetery workers) that paved the way for the Catholic Church to go all out in promoting turnout for the 2006 immigrant rights protests. And SEIU and UNITE HERE were the two key unions pushing labor to play a major turnout role in these massive events.

Medina has been a key negotiator on comprehensive immigration reform legislation since 2006. He has been criticized for being too willing to make deals with business interests, and for not demanding action from President Obama in 2009-10 when Democrats controlled Congress.

But while there is merit in such criticisms, it is far from clear that immigration reform could have obtained the 60 votes necessary to overcome a filibuster in 2009-10 even if Medina and his allies had done everything perfectly.

Despite these gains and others— including his role in the Los Angeles strike by SEIU Local 1877’s building service workers in April 2000 that won the largest wage increase in the 15-year history of SEIU’s Justice for Janitors campaign— some see Medina as leaving a tarnished legacy.

In the fall of 2008, SEIU President Andy Stern decided to place his largest California local, SEIU-UHW, the healthcare workers division, into trusteeship. Medina was designated one of the trustees in January 2009, creating a firestorm of opposition from UHW officials and workers. These officials and workers, many of which are now affiliated with NUHW, will never forgive Medina for implementing Stern’s takeover.

Far more disturbing for many Medina admirers was his decision in the spring of 2009 to support Stern’s effort to raid and takeover UNITE HERE. Medina was a close ally of UNITE HERE President John Wilhelm, with whom he worked to change the AFL-CIO’s immigration policy in 2000. His closest labor and political ally, Miguel Contreras, who had died in 2005, was from the predecessor to UNITE HERE. Contreras’ spouse, Maria Elena Durazo, head of the LA County Federation of Labor, also had her roots in UNITE HERE.

When I asked Medina about Stern’s plans to raid UNITE HERE soon after they became public, he was uncomfortable discussing it. Whereas he embraced the UHW takeover he wanted nothing to do with the UNITE HERE attack. This was a period when Medina and other immigrant rights activists were primed for action on comprehensive reform, and he treated the UNITE HERE attack as a distraction.

I was among those who saw Medina’s silence as betraying his loyalty to Wilhelm, Durazo, and the memory of Miguel Contreras. Some of us felt that Medina could have internally stopped Stern from raiding UNITE HERE, as Stern could not risk firing SEIU’s top Latino official over the issue.

We all make mistakes in life, and Medina made a big one in tacitly backing SEIU’s raid on its longtime ally and the nation’s most progressive union, UNITE HERE. Some believe this and his support for the SEIU- UHW takeover forever tarnished his legacy.

But in the big picture Eliseo Medina did as much to advance social and economic justice as anyone of his time. His career was marked by extraordinary dedication to working people, and he never stopped believing in the power of “Si Se Puede”!