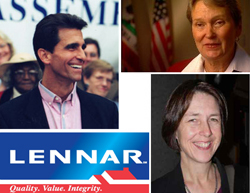 With California’s June 3 statewide election overshadowed by the Democratic presidential nomination fight, voter turnout—both in numbers and by constituencies—is harder than usual to predict. Early projections of a statewide turnout of around 40% may be overly optimistic, as even hotly contested races in San Francisco, Berkeley and Oakland have failed to excite voters. San Francisco voters will be primarily motivated by statewide initiatives Prop 98 and 99, the State Senate race, and two competing ballot initiatives regarding the future of Bayview-Hunters Point. East Bay voters have two very competitive races for the Assembly and State Senate, neither of which has generated much interest. The uncertain turnout, coupled with the absence of independent polling for most contests, adds to the challenge of predicting the outcomes. Here are my projections of the winners and losers on June 3.

Proposition 98, which would abolish rent control statewide, is the single galvanizing election issue for June 2008. This ill-conceived, poorly drafted measure will go down to a major defeat, a conclusion bolstered by the Field Poll released last week.

The real story of the Prop 98 campaign is the early polls showing that, as much as the measure undermined land use and environmental issues, voters were most aroused by the provision abolishing rent control. In other words, it is broad, statewide support for rent control, rather than concern over the undermining of traditional takings law, that will cause Prop 98’s defeat.

I will provide a full analysis of the broader impacts of Prop 98 later this week.

Proposition 99, which prohibits the use of eminent domain against single family homes, should narrowly pass. In a low turnout election where highly motivated voters will make up a greater than usual percentage of the electorate, those casting ballots against Prop 98 will also be voting Yes on 99.

The early fireworks in this race promised to greatly increase voter turnout in San Francisco. But incumbent Carole Migden’s campaign never hit stride, and by the time voters began paying attention, it was a contest between Mark Leno and Joe Nation.

For Nation to prevail, he must win big in Marin, and hope that Migden can drain enough progressive votes from Leno in San Francisco. To prevent the latter, independent campaigns linked to unions and progressive groups have sent mailers to San Francisco voters detailing Nation’s close ties to the health care industry, PG&E and other corporate interests not popular among the city’s progressives.
Leno has campaigned hard in Marin, and his margin of defeat to Nation in the latter’s onetime home county (he now lives in Sonoma) will be exceeded by Leno’s far greater victory margin in San Francisco. Leno only loses this race if San Francisco voter turnout is less than expected, and Marin County casts more votes for Nation than is anticipated.

That’s why Congressmember Lynn Woolsey’s late endorsement of Leno could prove critical to Leno’s victory, as it will likely reduce Nation’s margin in Marin. I see Leno winning this race by at least five percent, and later this week will discuss what Leno’s victory means both for San Francisco politics and the growing statewide tenants movement.

In another district that spans multiple, very diverse cities, Loni Hancock is counting on strong support in Berkeley and Oakland while her opponent, Wilma Chan, has focused her campaign in the city of Alameda and in Contra Costa County.

I initially thought Chan would win because of increasing dissatisfaction in Berkeley with what is often described as Berkeley’s Loni Hancock-Tom Bates “machine”; many see Hancock’s defeat as leading Bates not to seek re-election in November as Berkeley mayor, as both would head off to their political retirements.

But I was forced to alter my assessment after Hancock secured many key endorsements, including key labor unions and elected officials like Barbara Lee, Ron Dellums, and Assemblymember Sandra Swanson (Chan’s successor in the Assembly). Hancock also got the Sierra Club endorsement in a district where it holds great influence.

Hancock also quickly raised over $500,000, a stunning total for a longtime politician never known for her fundraising skills. Chan had a more progressive reputation in Sacramento than Hancock, but this is a race where Hancock’s endorsement edge will prove critical. Hancock wins this race.

Four candidates—Kriss Worthington, Nancy Skinner, Tony Thurmond and Phil Polakoff–have run aggressive campaigns, and the first three define themselves as progressives (Disclosure: I endorsed Worthington on the day he announced his candidacy).

Tom Bates held this Assembly seat for decades until he was term-limited out. He was replaced by his top aide, Dion Aroner, who after six years was replaced by Bates’ wife, former Berkeley Mayor Hancock.

Although this has been seen as a “Berkeley” seat, only 40% of the district includes Berkeley. It also includes the city of Richmond, and moderate/affluent voters in the Oakland Hills and Contra Costa County.

Kriss Worthington is a longtime City Council member strongly backed by Berkeley’s progressive community. Nancy Skinner, who was among the Council’s most progressive members in the 1980’s, is Hancock’s hand-picked choice to replace her; that helps explain why Skinner did not declare her candidacy until after the February 5 primary defeated of a statewide ballot initiative (Prop 93) that would have extended Hancock’s tenure.

Thurmond has run a strong campaign, and won the endorsement of the San Francisco Chronicle (which could hurt more than help in this district). As an African-American with a strong base in labor and the black community, a large turnout of minority voters in Richmond, Berkeley and Oakland could give him a surprise victory.

But Thurmond’s core base is unlikely to have a strong voter turnout. In contrast, Berkeley has many older residents who always vote, and they will split between Skinner and Worthington (moderate Democrats in Contra Costa and the Oakland Hills will go with Polakoff.)

My view of East Bay politics over the past three decades is this: when in doubt, voters go with the woman. The East Bay seems to prefer women candidates, and this is particularly true in a race where the perception (not the reality) is that the three most progressive candidates have indistinguishable views.

On the day Skinner announced her candidacy, I figured she would win by securing women voters throughout the district, and that she would be propelled to victory by her support among environmentalists and by Hancock’s base. Worthington has run a strong campaign, and if enough Cal students voted absentee for him before they left town, he could win—but my pick is Skinner.

As Beyond Chron stated in our editorial, The Case Against Prop G, this phony measure to allegedly “revitalize” Bayview-Hunters Point is one of the most cynical, profit-driven ballot measures ever seen in San Francisco. But as the victory of the anti-union Indian gaming measure proved in February, where the self-interest of most voters is not impacted, millions of dollars in campaign ads can bring victory.

The Lennar Corp. retained most of the city’s political consultants to help pass Prop G, resulting in one of the least effective political campaigns years. This is clearly a case of “too many cooks spoiling the broth,” as it is unlikely that any of these consultants on their own would have run such a poorly messaged effort.

Chastened by my mistaken belief that voters would see through the heavily funded Indian gaming ad blitz, I see Prop G winning a narrow victory. But this is more tentative than my other predictions, since the political orientation of the San Francisco electorate for June 3 is very unclear.

If there is a higher than usual progressive/tenant vote due to concern over Prop 98, then Prop G could be defeated. Similarly, Prop G could lose if there is a larger than expected turnout of conservative Westside voters who oppose Prop G as a public giveaway (this may explain the major Yes on G outreach effort in the Westside this past weekend).

Prop G could also be defeated by the presence of Prop F, which imposes greater affordability on the Lennar measure. Just as Prop 99’s presence reduces support for Prop 98, Prop F could lead voters to reject both measures.

But my sense is that Prop G’s consultants have engineered an absentee voter campaign in Pacific Heights, the Marina and other supportive areas sufficient to pass the measure. These voters will also be rejecting Prop F, though its presence on the ballot preceding Prop G and its popular goal—who can be against affordable housing?—gives the grassroots measure a chance to prevail.

If forced to pick, I see Prop F narrowly losing. But a Prop F victory would not be a surprise.

In the competitive Superior Court Judge race, Gerardo Sandoval should edge incumbent Thomas Mellon — although the third candidate (Mary Mallen) will probably necessitate a November run-off. Sandoval has the high name-recognition as an elected City Supervisor and former candidate for Assessor that is crucial in such low-profile races.

On other San Francisco measures, Prop A (school parcel tax), Prop B (retirement benefits reform), Prop D (diversity on commissions), Prop E (PUC appointments), and Prop H (campaign finance) will all pass. Prop C (moral turpitude) will fail, unless it benefits from those voting “yes” on all other measures.

Since absentee voting in San Francisco has been low thus far (only 25% of absentee ballots mailed had been returned as of last Friday), both Propositions F and G as well as the State Senate race could hinge on campaigns’ success in getting supporters out to the polls.

We have a full analysis of state and local election results on Wednesday.