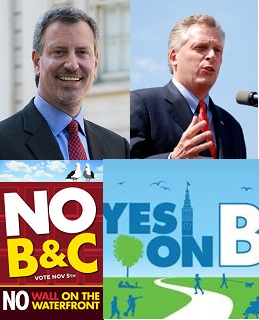 The November 5 elections feature three top-tier races that are not in doubt: Bill de Blasio will become NYC’s next mayor, Democrat Terry McAuliffe will finally become Virginia’s Governor, and Republican Chris Christie will win easy re-election in blue-state New Jersey. The chief question is the implications of these outcomes for big-city progressive politics in the case of de Blasio and the 2014 House and Senate races in the wake of the Virginia and New Jersey results. In San Francisco, an historic low voter turnout is projected for Props B and C, two measures involving the future of the 8 Washington project. The heavily funded contest has aroused strong passions, yet most San Franciscans do not care enough to vote. Here is my assessment of the broader impact of the three national races, and how I see 8 Washington breaking down.

Ahead by over forty points in polls, onetime progressive underdog Bill de Blasio will take office with an historic mandate for change. Not since Fiorello Laguardia’s 1934 victory has New York City elected a progressive mayor running on a platform of dramatically departing from how things have been done by his predecessor.

Now the question is what Bill de Blasio does with this victory.

Although Barack Obama never had the progressive credentials of Bill de Blasio, the President’s failure to govern as the change agent promised by his campaign fits an all too common narrative. Time and time again we see movement conservatives take office and implement their reactionary agendas, while candidates running as progressives—see Barack Obama, 2008, or Ron Dellums’ troubled tenure as Mayor of Oakland—either move to the center or prove unable to move a progressive agenda.

Progressives throughout the nation have a stake in Bill de Blasio staying true to his personal and political history, and to his populist campaign agenda.

I think he will. But there are powerful forces in New York City who want him to fail, and implementing progressive reforms in a city where the elite have owned government for decades will not be easy. That’s why everyone concerned about the ability of government to increase social and economic fairness should be focusing on de Blasio’s first year.

The national media will spend most of Tuesday night discussing the implications of McAuliffe’s victory, and that of other Virginia Dems, for GOP prospects in 2014. The media began this talk after the federal shutdown increased McAuliffe’s margin in polls, and it will be the talk of a national election night that lacks real drama.

But much as Democrats hope otherwise, an off year Virginia election is no predictor of what happens in House races across the nation in 2014. It is enough that McAullife, for all his many faults, stopped a very extreme Republican from taking control of Virginia.

While the media will sell Christie’s victory as the launching point for a presidential run, it will instead by his final victory lap. Christie’s brand does not sell nationally, and he will not be the GOP nominee in 2016. The traditional media regularly promotes those who break from their party on a few issues—such as Joe Lieberman or John McCain—even if this means, as in Christie’s case, pursuing an overwhelmingly anti-union, anti-social justice agenda.

For San Francisco, the November election finally brings an end to the long-running saga of 8 Washington.

The projected very low voter turnout of possibly under 100,000 makes it hard to issue a fact-based prediction. That’s why I am turning to my “Five Rules of Successful Ballot Initiatives” from my book The Activist’s Handbook, 2nd ed. to guide my analysis. Initiatives that satisfy these five rules almost always win, and those that fail in any key respect invariably lose. These rules have correctly predicted nearly all ballot initiatives in CA over the past two decades, failing only when a faulty campaign strategy intervenes (e.g. Prop 8 in 2008).

I addressed the single most important factor —that the initiative appeal to the self-interest of a significant portion of the electorate—in my Sept. 9 article on the project (for the purpose of my analysis, I am referring to the referendum on the project, as B and C are not going to split votes).

The referendum on 8 Washington satisfied this test by framing the issue around the future of the waterfront. The upsurge in rents and evictions in 2013 has nothing to do with 8 Washington, but opponents have effectively connected to voters’ self-interest by linking the project to such concerns.

As I noted in my earlier story, proponents of the project have also met the self-interest test. They have contrasted the millions in new tax revenue coming from the project with the small amount the city gets now, and vow that the project will “open up the waterfront.”

Three of the other five rules — that there was no alternative recourse to going to the ballot, the measure is simple to explain and understand, and that it reached the ballot with the support of key constituencies— have also been met by the referendum.

I see 8 Washington being decided by my fifth rule for winning initiatives: the surrounding political environment.

When I first heard that 8 Washington would be subject to a referendum I thought of the June 2008 election in which voters overwhelmingly backed Lennar’s development plans for Bayview-Hunters Point. But two factors distinguish Props B and C from the anti-Lennar measures.

First, opponents of 8 Washington will end up spending an estimated $800,000, more than enough money to run a winning campaign. Lennar’s opponents spent around $20,000.

Second, the November 2013 ballot involves a completely different voter turnout from the Hillary Clinton-Barack Obama June 2008 presidential primary. This week’s turnout could be less than the 100,000 that voted in November 2009, and very small turnout elections are decided by highly motivated voters (who, contrary to what many believe, are not always conservative).

Opponents of projects, legislation, initiatives or anything that changes the status quo tend to be more passionate than supporters. And the arguments raised in the 8 Washington campaigns reflect this: proponents talk about the huge revenue gain to the city from converting a private tennis club to housing, while opponents claim that the very future of the city is at stake.

I know from first-hand experience the power of high motivated voters in low-turnout elections. In 1979, I worked on progressive Gus Newport’s campaign for Berkeley mayor. It rained on the morning of Election Day, and the over 100 volunteers who had gotten up before dawn to post doorhangers were distressed all day by reports of vacant polling stations. This was particularly true in the campus area where we thought students would heavily vote for Newport and the progressive Berkeley Citizens Action slate.

But when the votes were announced that night, Newport had unseated incumbent Mayor Warren Widener. A left-wing candidate had defeated a moderate in the lowest voter turnout in the city’s modern history.

Newport’s voters were far more motivated, and in a historically low turnout election, that made the difference.

The combination of a low voter turnout and a political environment that is highly focused on Ellis Act evictions and rising rents has turned what in a state or national election cycle would be an easy win for 8 Washington into a tossup. We will know a lot when the absentees are announced: If the yes on B and C side does not have a strong lead, Props B and C are in trouble.