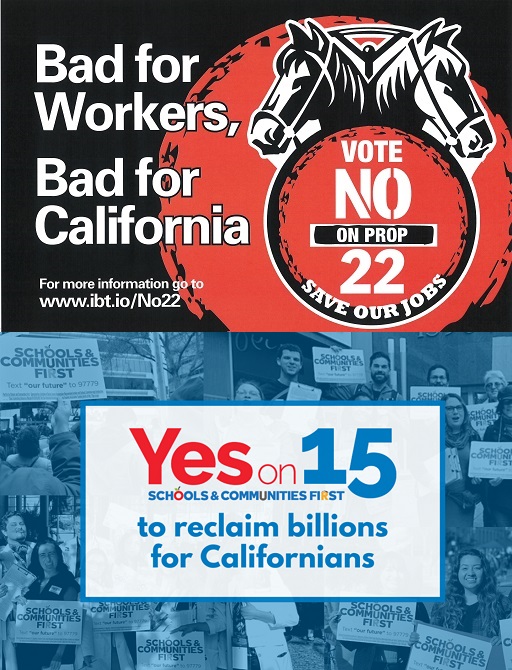 I wrote about Prop 16’s political problems (See “Will California Again Reject Affirmative Action (Prop 16“) and they have not improved. Many voters do not understand the term “affirmative action.” Many who do are not enthused about its reinstatement. The 1996 repeal of affirmative action could be blamed on a poorly run No on 209 opposition campaign. But  Prop 16’s upcoming defeat reflects political problems that may be insurmountable. Democrats needed to go back to the voters in 1998, not wait nearly 25 years. As a huge backer of affirmative action it pains me to say this but the numbers around Prop 16—it trails by ten percent — does not encourage a future measure.

I described why Prop 21, which strengthens rent control, will lose big in my story last week.

Prop 13’s 1978 passage changed my life. It led me to work nearly fulltime on a Berkeley ballot measure in November 1978 (Prop I) which forced landlords to share 80% of their Prop 13-tax savings with tenants. We won. Having enjoyed mobilizing for tenants I then helped elect Berkeley’s first pro-tenant mayor in April 1979. I  thenmoved to San Francisco, opened the Tenderloin Housing Clinic, and spent the past forty plus years focusing on tenant rights and affordable housing.

That’s the first time I heard the term “split roll.” Goldberg’s assessment of Prop 13’s fiscal impact was spot on. Yet it has taken over forty years for the measure Goldberg recognized we needed to reach the ballot.

Why so long? I would ask Goldberg that question when our paths crossed and his answer was always the same: the polls don’t support it. Simply put, voters feared that any tampering with Prop 13 would ultimately result in raising taxes on homeowners—an argument that remains the main line of attack against Prop 15.

I thought a lot about Goldberg’s analysis when polls last week showed Prop 15 ahead 49%-42%, still below the 50% needed to win. How can a measure essential for our underfunded schools not be winning big during our economic crisis? Prop 13 was sold as a “homeowner’s revolt,” not as a means to create a tax windfall for corporations owning commercial and industrial sites.

But scare tactics work great to keep an untenable status quo. And No on 15 has been trying to scare voters for months.

Fortunately, Prop 15 has run a powerful grassroots campaign. It has fought for every vote and is in the direct self-interest of a significant portion of the electorate. I  see Prop 15 winning

Prop 22 is not only the most dangerous ballot measure on California’s ballot; it does more to attack workers’ rights and undermine social and economic fairness than any ballot initiative in the nation. If it passes, expect similar measures attacking low-wage workers employee status to spread across the nation.

Last week’s poll had Prop 22 ahead 46-42% with 12% undecided. Some saw the poll as signaling a Prop 22 victory, as it needs only a third of the undecideds to reach 50%. Others saw Prop 22’s failure to reach 50% after spending $200 million as a danger sign, especially since late undecideds tend to vote No.

How can the anti-worker Prop 22 be leading in “progressive” California?

Start with the 10-1 spending edge. $200 million buys a lot of false advertising. I got a mailer saying Prop 22 would reduce drunk driving—who can be against that? Yes on 22 regularly claims that it “protects jobs, guarantees earnings and provides health care benefits.”

I saw a poll which found roughly 30% of voters thought Prop 22 would raise drivers’ wages. Prop 22 backers have spent tens of millions of dollars on pro-worker messages that completely contradict what the initiative will do. I hear people who should know better believing these lies, which shows the power of a $200 million disinformation campaign.

Prop 22’s advertising blitz may have an even greater impact because many California voters are completely focused on defeating Trump. This helps Prop 22 in two ways.

First, people are more likely to be getting information about Prop 22 from paid ads over fact-based newspaper stories. Second, there has been a massive diversion of California activist energy to battleground states in the presidential race. This includes labor unions like UNITE HERE and IBEW 1245, which have California-based workers engaged for Biden in multiple states. Many of these activists would likely be battling Prop 22 were it on the 2018 ballot.

We saw a similar focus in 2008’s Obama campaign. Many assumed Prop 8, a constitutional amendment banning same sex marriage, would fail in progressive California given the huge voter turnout. But there was never a strong grassroots campaign connecting Obama voters to No on 8, and the right-wing backed initiative passed.

The comparison has key differences:  Joe Biden’s No on 22 stance has been heavily promoted by the No campaign, and No on 22 has run as a much stronger grassroots campaign than No on 8. But Democrats understandable focus on defeating Trump has reduced grassroots personnel to defeat Prop 22.

As opponents correctly depict Prop 22 as a disaster for workers, the state’s Democratic governor has taken no position. Undecided voters may see Gavin Newsom’s neutrality and conclude (wrongly) that Prop 22 must not be as bad as opponents say.

Newsom got credit for signing AB5, the bill Prop 22 overturns. But everyone knew that Uber and Lyft would back a measure to overturn AB5. This reduces the value of Newsom’s signing AB5 and then staying neutral on Prop 22.

If Prop 22 passes, labor unions will blame Newsom for not backing them. They might even decide to back a rival in the 2022 gubernatorial primary. After all, when labor was involved in its biggest fight in decades, one that Joe Biden has strongly backed, Gavin Newsom stayed on the sidelines.Labor could back a competing candidate in the 2022 primary that they can count on in tough struggles—and that candidate could defeat Newsom.

Newsom still talks about a “deal” around AB5/Prop 22. But if Prop 22 wins Uber and Lyft have no reason to negotiate.

California voters will reject affirmative action and deny restoring to cities the power to enact stronger rent control. Prop 15, needed to bring billions to schools, is barely ahead. And the most anti-worker ballot measure in modern California history could actually pass.

We can talk about Democratic super-majorities in the state legislature. And the lack of Republicans holding state office. But if Prop 15 loses or Prop 22 wins, it shows a different way of measuring California’s politics will be needed. Prop 22 is so destructive that I have to believe that undecideds will vote no. I wouldn’t bet on either side but if forced to choose would predict Prop 22 loses.

Check back with us during the rest of the week for our analysis of the results.