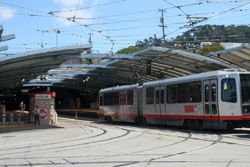 Since the only tough pick locally was Prop D, and it lost in a landslide after I predicted it would narrowly win, an explanation is in order. Although I wrote the piece without knowing that the No on D Democratic Party slate card would be widely distributed on election day, that would not explain a double-digit defeat. Here’s why my analysis of D’s chances was wrong.

My chief mistake was analogizing Prop D to previously successful campaigns to reform Planning, Board of Appeals, and the Police Commission through splitting appointments between the Supervisors and the Mayor. In all of the above cases, activists had personal experience with bad decision making by these Mayor-controlled bodies.

In contrast, few have attended a MTA meeting and the only issue that aroused controversy was a fair hike ultimately approved by the Supervisors.

As a result, voters did not see a connection between the composition of the MTA Board and the problems at MUNI.

My second mistake was underestimating the importance of the absence of a Yes on D campaign. A major reason voters did not link MUNI’s problems to the MTA Board was that they never got a mailing making this connection.

In contrast, downtown interests funded mailings for No on D, and Mayor Newsom was even doing No on D commercials on progressive Air America radio.

Finally, while I assumed that voters would be more likely to vote for Prop D because it was the only option for reform on the ballot, it did not directly address specific problems at MUNI. So many voters may not have seen it as making a difference, and figured they would hold out for real reform.

Now the burden is on downtown and the Mayor to find their own solution for MUNI.