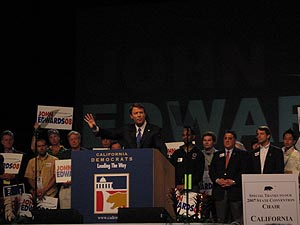 This weekend, all the major Democratic presidential candidates attended the California Democratic Convention in San Diego to solicit support from the party faithful. Although getting out of Iraq was top on the mind of party delegates, Hillary Clinton’s campaign had a surprising show of support – but she lost most of the crowd by refusing to apologize for initially supporting the War. Barack Obama was treated like a rock star and gave a powerful speech, but despite being the only major candidate who opposed the War from the start failed to do what he should have done: hit a home run the way Howard Dean did in 2003. John Edwards did not have much of a campaign presence at the convention until he spoke on Sunday morning, when many of the delegates had already left. But for those who stuck around to hear Edwards speak, his concrete progressive proposals coupled with a passionate and eloquent message won many converts on the Convention floor – including possibly myself.

The political context behind this year’s convention was similar to the convention four years ago, which was held on the weekend before George Bush invaded Iraq. Back then, delegates were angry at an imminent War based on lies, and furious at their party for rolling over without a fight. John Kerry, the choice of the party establishment, was booed for having voted for the War – and John Edwards was likewise heckled. Meanwhile, Howard Dean came out of nowhere to give a feisty and eloquent speech against the War that electrified delegates and catapulted him into the “movement” candidate of 2004.

This year, the Convention was held immediately after Congress voted to withdraw from Iraq, and right before President Bush’s expected veto this week. Party activists were nervous about whether their leaders in Congress will succumb to the President’s blackmail – and still angry at many Democrats for having supported the War in the first place. A sizable number called for the impeachment of George Bush and Dick Cheney, meaning they did not have the patience for a party leadership that is nervous to take bold initiatives.

But Hillary did not get the John Kerry treatment at this convention, and her campaign had a surprising number of supporters. For example, the LGBT caucus on Friday night felt like a Clinton campaign rally, despite her husband’s betrayal on gays in the military and same-sex marriage. State Senator Christine Kehoe announced her support for Hillary at the caucus, because she has “supported the LGBT community throughout her whole public life,” and as President has promised to end Don’t Ask Don’t Tell. I asked if Hillary would also work to repeal the Defense of Marriage Act that her husband signed – but Kehoe could only tell me that she would ask her that question the next day.

Clinton’s speech on the Convention floor was surprisingly well received, as female delegates wearing “Impeach Bush” stickers enthusiastically waved Hillary campaign signs. She vowed to be “ready to lead” a country that is “ready for change,” and spoke passionately about universal health care – while acknowledging her prior failure to get it done. She spoke about immigration reform, vowed to fix “everything wrong” with No Child Left Behind, and to follow California’s lead on energy independence.

But when the speech shifted to Iraq, Clinton lost most of the delegates and began to get scattered boos. Hillary has said repeatedly that she would not have voted for the War if she knew what she knows today, but unlike John Edwards has refused to apologize or take any responsibility for her failure. She criticized the Iraq War for being “one of the darkest blots of our history” and said that Bush had ignored military advisers, all the while saying nothing about her complicity in the matter.

While Hillary had a strong organized base at the Convention, Obama’s campaign had a more grassroots feel and his supporters were more enthusiastic. He got a true rock-star welcome as he walked up to the Convention podium, as throngs of young people ran up behind him and stayed in the aisles during his speech. “We have a cynicism where politics is a business and not a mission,” said Obama, as he criticized a “foreign policy based on bluster and bombast has led us to a war that should have never been authorized and should have never been waged.”

Obama vowed to “turn the page” on this era of cynicism – providing an interesting contrast with Clinton, who seemed to promise a return to the good old days of her husband’s administration. Obama said he was proud to have opposed the Iraq War back when it was not popular, and he also credited the party activists for having opposed it then as well. “We knew back then that this War was a mistake,” he said.

Referring to Congress’ passage of withdrawal legislation, Obama reminded the crowd that we were now “one signature away from ending the War.” But while Hillary Clinton said that Bush will veto the legislation and so she would end the War on her first day as President, Obama said “if the President refuses to sign it, we will find the 16 votes that we need to end it without him. We will get this done. We will bring our troops home.”

Barack Obama is a passionate and charismatic speaker, and delegates who had never heard him before were impressed and enthusiastic. But as someone who has heard him speak twice in the last two months, I did not feel that he offered much different this time. His speech undoubtedly fired up the crowd and gained new converts to his campaign, but it did not serve as a catalyst for his campaign the way that Howard Dean’s speech did at the 2003 Convention. While it helped his campaign, he’s still the insurgent candidate trying to take on the front-runner.

In fact, the largest criticism I heard from delegates afterwards was that Obama’s speech was big on inspiring rhetoric but small on substance. While many were frustrated with Hillary Clinton and her refusal to apologize for Iraq, they argued that she provided more policy detail on other issues than Obama did.

By the end of Saturday, delegates had also heard speeches from various presidential candidates who have absolutely no chance of winning. Mike Gravel said with a straight face that he was going to be a “most unusual President,” and lauded the California initiative process as a model for his national initiative process. Chris Dodd gave a decent speech with substantive policy goals, but came off as too stiff and did not pick up traction. And while Dennis Kucinich had some ideas that could steer the debate in a positive direction, his New Age talk was so over-the-top (“America is waiting for a President who is a healer”) that I felt high on marijuana just by listening to him.

John Edwards did not address the delegates until Sunday, because he was at the South Carolina Democratic Convention on Saturday – the only presidential candidate to attend both conventions on the same weekend. With a campaign that has focused on poverty and workers’ rights, Edwards has picked up substantial support among labor unions. But his campaign was invisible at the Convention until he showed up on Sunday, when many of the delegates had already left San Diego.

But those who heard him speak were impressed because he was more passionate and progressive than Hillary, and far more substantive than Obama. Edwards was the only candidate besides Bill Richardson (who spoke later) to mention the genocide in Darfur, the only candidate to focus on the gap between rich and poor, the only to acknowledge the problem of race in America, and while everyone else talked about universal health care, Edwards was the only serious candidate to talk about single-payer.

“I voted for this War,” said Edwards, “and I was wrong. I am speaking with every fiber of my being to get out of Iraq.” Edwards spoke forcefully about the President’s threatened veto of the withdrawal legislation from Iraq, and urged Congress to not back down. “If the President vetoes that bill,” he said, “it is George Bush who is not supporting the troops. Congress needs to show strength and courage.”

Edwards spoke forcefully about poverty in America, and listed the most comprehensive economic justice agenda of any candidate – starting, he said, with a national living wage. “If you can join the Republican Party by signing a card,” said Edwards, “every worker should be able to join a union by signing a card. We ought to ban the permanent replacement of striking workers.”

While Clinton and Obama both called for universal health care, said Edwards, “it’s not enough to say you’ll do it without creating a specific plan.” He suggested requiring every employer to provide health care or else create a fund – and give Americans free choices on what health care system to get. “And that may end up being single-payer,” he said. Edwards said his plan will cost $90-120 billion a year, “and I can pay for it by getting rid of George Bush’s tax cut.”

As the front-runner, Hillary Clinton needed to not bleed support – and her mistakes at the Convention caused her to lose ground. Barack Obama is her main challenger, and he needed to do another Howard Dean speech to catapult him into front-runner status and thus change the dynamics. He may have inspired more people, but it did not shift the momentum for his campaign. But John Edwards did a better job converting new supporters to his side, which is why he was the “winner” of this year’s California Democratic Convention.

As someone who has always opposed the War and want “Anybody But Hillary” to win the nomination, I came into this Convention about 90% for Obama and 10% for Edwards. While I have not made a firm decision and my opinions may change between now and February 2008, I am now more likely to support John Edwards because he was both passionate and substantive. Delegates who were still at the Convention felt the same way, as the Edwards campaign table ran out of stickers within minutes after his speech.