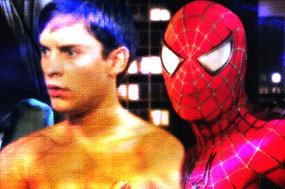 The bloom is off the rose for Arnold Schwarzenegger. The Governor not only broke his pledge to deliver an on-time budget, but relied on the same borrowing from the future that he attacked Gray Davis for doing in the recall campaign. Absent the media hype Schwarzenegger has been revealed to be more Peter Parker than Spiderman, and even convervatives are disillusioned with their action hero.

The media made four mistakes in exaggerating Schwarzenegger’s power and skills.

First, it gave the Governor far too much credit for winning a workers comp reform agreement that was never a line in the sand issue for Democrats. To the contrary, Dems were happy to have the opportunity to support another “reform” of the very unpopular workers comp system.

Second, the media felt that the Governor had outmaneuvered Democrats in striking deals with teachers unions, local governments, and the leaders of state colleges and universities. But the latter two constituencies have little popular base, and the Democrats had no reason to go along with the deals made by either, particularly the agreement that reduced UC admissions.

Third, the Governor is not a world-class negotiater. Nor is any member of his staff. It was no surprise when the prison guard’s union took the Governor-and the state’s taxpayers-to the cleaners over an agreement so one-sided that it provoked demands by a federal judge that it be modified.

Finally, and perhaps most importantly, the media misjudged the Governor’s willingness to cut education and health programs. Conservatives are dismayed that when push came to shove Schwarzenegger refused to go along with the severe cuts that Republican Legislators wanted.

Republicans thought they had elected Ronald Reagan, whose friendly demeanor masked a vicious hostility to all government programs for the poor. But Schwarzenegger clearly does not have the fire in the belly to gleefully destroy the state’s safety net.

Dan Walters, the longtime conservative columnist for the Sacramento Bee, argued this week that the Governor had missed an historic opportunity to solve the state’s budget mess by standing against both parties. Other journalists echoed this refrain.

But forging such an independent stance requires a hands-on Governor with a grassroots campaign organization in key districts throughout California. Schwarzenegger is a one-man organization who sells his program by making threats at shopping centers.

The media has been so bedazzled by Schwarzenegger that they sold a false idol to the people, while popular adulation of the actor spawned further media idolatry. As a result, Californians were seriously misled about what a replacement for Gray Davis was likely to accomplish.

Recent polls show Governor Schwarzenegger’s popularity has fallen under 60% for the first time. Now that the public has learned he is not a superhero, the Governor may have trouble maintaining even this lower support level.

Fate can take strange turns, and it may take a President John Kerry to return the luster to our Republican Governor. Arnold won’t be seen with Bush but would embrace Kerry, who is strongly if secretly backed by Maria Shriver, the Governor’s wife.

An alliance with Kerry would return Schwarzenegger to the nonpartisan figure that brought him record popularity.

Arnold’s breadth as an actor was quite limited, and the same seems to be true in his political career. Having failed in the role of fire-breathing Republican, he is eager to resume his more popular role of nonpartisan leader putting the people’s interests first.

Now that the budget is done, Arnold can renew his relationship with John Burton. Many speculated about the basis of their friendship, but now it has been revealed—Arnold has been giving John acting lessons for Burton’s proposed post-politics career as a movie star.