Editorial: San Francisco Will Never Be a City Without Black People 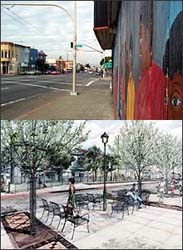 (Reprinted with the permission of San Francisco Bayview Newspaper)

“How long do you think these colored people are going to be here?” the mayor of San Francisco asked Tom Fleming, editor of the Sun-Reporter newspaper, shortly after World War II, when the Black population had grown from less than 5,000 to nearly 50,000.

“And I said, ‘Mr. Mayor, you know how permanent the Golden Gate Bridge is out there?’ He said, ‘Yes.’ ‘Well,’ I said, ‘the Black population is just as permanent,’” Fleming recalled. “‘And San Francisco may as well prepare itself to find jobs and housing for them, because they aren’t going back down South.’”

Ten years ago, when the San Francisco Redevelopment Agency admitted in writing that their purpose in destroying the world famous Fillmore district, known as Harlem of the West, was to drive Black people out of San Francisco, Rev. Amos Brown led a chorus of Black leaders in demanding, “Reparations now!.”

I hope we won’t have to sue the City. I hope the Board of Supervisors will decide not to be remembered as the board that finished the ethnic cleansing Redevelopment started. I hope that at their meeting Tuesday, May 9, beginning at 2 p.m. in Room 250, City Hall, they’ll reject Redevelopment’s Bayview Hunters Point Redevelopment Plan.

But Redevelopment is tricky. They’re good at robbing the poor to give to the rich – and some of us can’t see it coming. A few people believe – or want to believe – Redevelopment’s promises of good jobs and affordable housing.

I believe – I know – that we can build a beautiful community ourselves, where everyone can earn a good living. Black people built this country. We know how. I know how, and I’ll teach you. Just get the City’s boot off our neck, and we’ll solve our own problems.
Here’s what veteran journalist Tom Fleming said about Redevelopment: “We felt that since Blacks moved into the core areas of all the big cities in the country, that this was the government’s scheme to get them out of the core areas. ? We weren’t the only ones to call (it) ‘Black Removal.’”

To solve the problem of run down houses, he said, Redevelopment could have enabled people to fix them up, and “they would have been in good shape for another 40 years.” Those are the reparations we need.

Since banks redline us and our neighborhood and they won’t loan us money to build or remodel our property no matter how much equity we have, we’ll demand a loan fund from Redevelopment. They promised one years ago, so, if need be, we’ll go to court to force them to deliver.

We can renovate all the shops on Third Street, all our owner-occupied homes, all our public and subsidized and other rental housing. We can create all the jobs and business opportunities we need.

I want to invite all Bay View readers, including the Board of Supervisors, to come to a press conference and rally before the board meeting. We’ll be on the City Hall steps at 1 p.m. on Tuesday, May 9, to say, “We have a better plan for Bayview Hunters Point. This is our land, and we won’t let Redevelopment grab it.

“We deserve to live in San Francisco. We will fight to stay here. We will sue to stay here.” Let me assure you that some very smart, prominent lawyers are interested in helping us. We’ll set up a Bayview Hunters Point Legal Defense Fund if we need to sue.

Email Willie Ratcliff at publisher@sfbayview.com. Readers are urged to email the Board of Supervisors at Board_of_Supervisors@ci.sf.ca.us and to come out in great numbers – just as the immigrants did – to the steps of City Hall on Tuesday, May 9, 1 p.m. “Si se puede!” “Yes we can!”