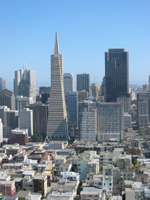 Mayor Newsom’s appointment of Dean Macris as Acting Planning Director was a strange move. First, there was no reason to appoint someone from outside the Department for what is alleged to be a three month job. Second, as the Planning Director under Mayors Feinstein and Agnos, Macris is hardly the type of “fresh face” that Newsom pledged to bring into city government. Third, Macris has made a living in recent years representing developers with business before Planning. He should reveal who his clients have been over the past five years so the public can ensure they do not get special treatment.

During the Feinstein years, Planning Director Dean Macris was known as the mayor’s bag man. He was the guy who cut the deals that resulted in the massive office construction boom, a strategy that dramatically worsened the city’s housing crisis and brought a backlash that led to the passage of growth controls in 1986.

Tim Redmond spells out Macris’s legacy in his Guardian column this week, and in an accompanying editorial. It is must reading for those who do not know Macris’ record.

Macris is but the latest ex-Feinstein official that Mayor Newsom has returned to local government. The list includes former Feinstein PUC chief Richard Sklar (appointed by Newsom to the PUC Commission), former Feinstein Chief Administrative Officer Rudy Nothenberg (appointed as “special monitor” for the DBI), and the rumored appointment of ex-Feinstein aide Jim Lazarus to head the Redevelopment Agency.

When former Planning Director Gerald Green took an eight-month leave in 2003 to attend a fellowship program at Harvard, Zoning Administrator Larry Badiner took over as Acting Director. Many wonder why Newsom did not simply allow Badiner to again assume this role, since a new Director is projected to be on Board by January.

Given Macris’ extensive connections with those with projects before the Department, the public needs assurance that special interests do not have a field day at Planning during Macris’ tenure. This is best accomplished by Macris publicly disclosing his list of clients over the past five years for whom he performed work in San Francisco.

Mayor Newsom has stressed the need for public transparency in the permit application process. This same principle must apply equally at Planning. Unless Macris discloses his client list, the public has no way of knowing if he is using his interim position to benefit private clients.

Macris must release his client list not because of suspicions that he will violate the public trust; rather, it is to create the “transparency” that Mayor Newsom has vowed to make a hallmark of his administration.

If Macris refuses to provide the client list voluntarily, the Planning Commission should require him to so act.