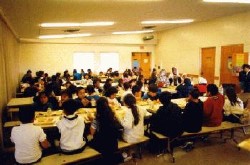 President-elect Obama’s $750 billion stimulus package is seeking to boost jobs by focusing on such “brick and mortar” infrastructure projects as roads, bridges, schools, and solar panels. But there has been surprisingly little talk about investment in the nation’s “human needs” infrastructure. For example, it’s fine to build new schools, but how about doubling the number of tutors and/or teachers in low-performing districts? I’ve seen a lot of new school buildings erected that have no impact on closing the racial achievement gap; but more tutors and teachers would. And how about the government funding at least 100,000 cultural workers, who have been cut adrift from federal funding since the Reagan Administration, resulting in a nation whose arts, music and dance are increasingly privatized. The arts offer a route toward the nation’s cultural transformation, something that will not come about through new construction alone. And nobody walking our urban streets can dispute that we desperately need more social, mental health and outreach workers. Funding our human needs infrastructure is vital to the nation’s health and welfare, and these workers can be hired much quicker than workers on the stimulus package’s “ready to go” construction projects.

It’s been a very long time since the United States had a President that viewed public investment as our best economic strategy. And Barack Obama’s plan to invest $750 billion in rebuilding the nation’s infrastructure is certainly long overdue (Charles Krauthammer suggested on FOX News Sunday that the Democrats had been waiting for such a plan since 1950).

But those familiar with the public infrastructure process know that projects almost never begin quickly, and even those on “ready to go” lists require Requests for Proposal from contractors that prevents immediate action.

And as Linda Hirshman describes in her op-ed in today’s New York Times, “Where Are the New Jobs for Women,” brick and mortar infrastructure jobs, no matter how “green,” are overwhelmingly male. Women, whose votes elect Democrats, cannot be left out of Obama’s plan.

This means that for the Obama plan to create 2.3 million new jobs in the next two years — and “new” should mean on top of the 1.9 million recently lost, for a total of 4.2 million — the stimulus package must devote tens of billions toward hiring people to serve human needs. Tutors, teachers, artists, health workers, and those employed to improve the environment also inject their salaries into the economy — and all can start work well before major infrastructure projects begin.

The limits of an economic stimulus package heavily weighted toward brick and mortar is most evident in the field of education.

The United States presides over a heavily segregated public school system in which low-income kids attending inner city schools are on a path to failure. Newly constructed school buildings will not alter this dynamic, though such facilities are certainly necessary.

What low-performing schools, and middle-school students performing well below grade level need, is intensive tutoring. The stimulus package could fund at least 100,000 tutors/teachers, at an annual cost of only $500-750 million.

Tutors for low-performing students avoids the debate over the value of programs like Teach for America, and it also bypasses the problem of a lack of additional classrooms, which adding more teachers would raise (the tutoring of could occur in libraries or other school buildings not used for classes). For school districts that have a teacher shortage, the stimulus package should fill the gap.

Among the worst vestiges of the Clinton years was the linking of education spending to the nation’s technological advancement, downplaying the life-affirming, intrinsic value of culture. Since the Reagan Administration bulldozed federal arts and humanities funding, the nation’s entire cultural apparatus has become increasingly privatized.

Why shouldn’t the stimulus package fund arts groups and schools to hire at least 100,000 cultural workers? These workers can paint murals, teach art, dance, music, and theater, and provide the level of art support that existed in the United States from the New Deal through the Carter Administration.

The Obama transition team has already endorsed an ArtistCorp, though this appears separate from the stimulus package. But a Musicians National Service Initiative already exists, and could hire people with stimulus funds through its recently created MusicianCorp.

Hiring cultural workers would not only boost consumer purchasing power, but in doing so the Obama Administration would send a powerful message about the nation’s values. The United States should not be only about high-tech, infrastructure, and finance, and our cultural infrastructure deserves more than having its leaders honored annually at a Kennedy Center gala.

As cities and states across the nation cut health and human services to the bone, the economic stimulus package can reinstate service workers who have been laid off. As with the jobs noted above, these are positions where hiring can occur immediately, creating a much faster economic boost than with the major infrastructure projects.

The nation’s social safety net is in tatters. The United States is the only major industrialized nation that tolerates widespread visible homelessness on its public streets, but we are also alone in allowing people with acute mental health problems to roam public areas because we refuse to spend the money for housing or treatment.

Building roads and bridges will not address this problem. And even if infrastructure projects dramatically boost the nation’s economy, this does not address the increasing need for social services over the next two years.

Again, the cost of adding 100,000 of these critical workers would be around 1% of the entire stimulus package. Let’s not build bridges and end up with an increased number of people sleeping under them.

Remember when we used to talk about government hiring people to clean beaches, parks and other nature areas? The stimulus should address this need.

Such positions are as much “green jobs” as those installing solar panels and building new mass transit. And they can start immediately, as chronically under-staffed local, state and national park services desperately need help.

Obama has talked about expanding Americorps and other national service programs, and has particularly linked community service to college tuition reductions. But the stimulus package creates an opportunity to think bigger, and more creatively.

First, the stimulus package should fun nonprofit groups to hire Americorps staff without requiring matching funds (which few groups have in this economic climate). In other words, in exchange for providing office space and supervision, the nonprofit sector would get staff fully paid by the federal government.

Second, we need to return to the days of VISTA and CETA, which included a broader array of federally funded community services than is now available. As a former community organizer, Obama should ensure that today’s young people get an opportunity for a similar experience, and for as little as $25 million the stimulus package could put at least 750 young people into communities where they could help make a difference.

Infrastructure jobs are politically safe, as there is visible evidence of how money is spent and Republicans will not accuse Democrats of using federal funds to promote “advocacy.” But America’s problems will not be solved by brick and mortar, new technology, and green building practices alone.

The Democratic Congress has a real opportunity to reverse the policy errors of the last three decades, and to rejuvenate our public sector in all of its facets. With $750 billion to spread around, and an electorate calling out for change, let’s hope Congress and our new President takes the best approach, not just the safest.

Randy Shaw is the Editor of Beyond Chron and author of Beyond the Fields: Cesar Chavez, the UFW and the Struggle for Justice in the 21st Century (University of California Press)