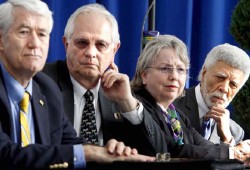 On June 26, the East Bay Green Corridor partnership held its second annual summit at the Oakland Museum. The partnership was founded in December 2007 by the mayors of Berkeley, Emeryville, Oakland and Richmond, the chancellor of UC Berkeley and the then-director of Lawrence Berkeley National Laboratory (Steven Chu, now Obama’s Secretary of Energy) on the premise that collaborating across city limits and institutional boundaries in the name of green economic development would bring the region lustre and lucre. “What we’re doing,” said Berkeley Mayor Tom Bates, the group’s chair and prime mover, “is putting down our cities’ chauvinism and saying, “Look, we’re all part of the area, and need to work together. We’re going to catch the green wave, and everyone’s going to be in the same boat.’”

The June 26 event was intended to publicize the first fruits of their effort. In a glowing review, the Chronicle said that the consortium “has attracted $76 million in federal stimulus funds for research, job training, weatherization and other environmentally themed projects.” The Corridor has also attracted seven new members — the cities of Albany, Alameda, El Cerrito and San Leandro, as well as Cal State East Bay, the Peralta Community Colleges and the Contra Costa Community Colleges — and has hired a fulltime director, Carla Din, formerly the western regional field director of the Apollo Alliance. Din’s salary will come out of a $170,000 budget for Fiscal Year 2009-10, funded by a $10,000 donation from each of the twelve partners, plus a $50,000 federal green jobs grant. The Corridor will be run out of the Oakland office of the East Bay Economic Development Alliance.

Behind the rhetoric of shared green prosperity lie big questions about power, class and accountability.

Summit attendees could have easily gotten the impression that the Corridor partnership is dominated by two allied heavyweights: UCB and the Lawrence Berkeley National Lab. It wasn’t just that five of the event’s fifteen speakers (including Secretary Chu, who appeared in a video taped especially for the occasion) are affiliated with the university and/or the lab. More to the point, the two institutions bring to the table decisive clout in the form of prestige, connections and capital.

Their preponderance was reflected in the breakdown of the $76 million federal stimulus funds coming to the area. Contrary to the Chronicle story, those monies are going to various members of the Corridor partnership, not to the consortium itself. As outlined in the summit press release, only $17.4 million is slated for cities (Berkeley, Oakland and Richmond). The remaining $58.5 million is designated for Cal or the Lab—and that’s not counting the additional $115.8 million in federal stimulus money to be received by LBL for laboratory space and seismic upgrades, the Berkeley Lab Laser Accelerator and other projects that don’t fit into a green portfolio.

But as Emeryville Mayor Dick Kassis observed, the stimulus is a one-time deal, or so it’s prudent to assume. Despite the hoopla about federal Recovery Act Funds, the major thrust of the East Bay Green Corridor is toward attracting high-profile environmental businesses and keeping them here. “It’s a very competitive world for these green companies,” said panelist Michael Cohen, director of the University’s Office of Technology Licensing. To stand out from the many other places courting such firms, “we have to leverage our strengths,” including “proximity to UC Berkeley and LBNL.” The “green companies” Cohen had in mind were not the solar installers, retrofitters or construction companies who are set to hire newly minted graduates of Oakland’s Green Jobs Corps. Rather, he was referring to “green tech” spin-offs from research done at Cal and the Lab.

Two examples were detailed by the summit’s keynote speaker, UC Berkeley Professor of Biochemical Engineering and LBL Acting Deputy Director Jay Keasling. One is the Joint BioEnergy Institute — JBEI for short (pronounced Jay-Bay) — which Keasling heads; the other is Amyris (sounds like amorous). JBEI has over 165 local employees, Amyris has 200. Both companies are located in Emeryville and engaged in developing renewable fuels. In December 2008 the New York Times reported that JBEI is financed by the Department of Energy, which has committed $135 million to the company over five years. Amyris says it has raised over $120 million in equity funding.

Tom Bates told the summit audience that in 2008, research at UC Berkeley and the Lawrence Berkeley National Laboratory generated twenty-five green start-ups. “We need to capture them,” the mayor averred. A crucial allurement is desirable space. The consortium, Bates said, is undertaking “an inventory of the industrial land in the East Bay Green Corridor that will be available for green companies” and that presents “opportunities for industrial growth.”

On its face, doing an inventory looks like a good idea. Land available to industry is in short supply in the East Bay, due to the region’s built-up character and to the extensive conversion of industrial lands to other uses — above all, condominium development. Mindful of the shortage, the Oakland City Council voted in 2008 to restrict conversion of much of Oakland’s approximately 33.8 million square feet of industrial land. In a jointly written op-ed, Sharon Cornu, Executive Secretary-Treasurer of the Alameda Central Labor Council, and Joseph Haraburda, President and CEO of the Oakland Metropolitan Chamber of Conference, urged the council “to keep Oakland’s industrial land for industry.” What’s notable about their piece, besides its show of unanimity, is its democratic vision. For Cornu and Haraburda industry means thousands of well-paying jobs in “green technology as well as growth in existing industries such as logistics and custom manufacturing” — in other words, quality employment for people with a wide range of backgrounds and capabilities.

By contrast, for Tom Bates and his associates at UCB and LBL, “industrial growth” appears to mean accommodating highly credentialed professionals and the well-financed organizations that serve them. Witness their current campaign to undo the industrial zoning that protects the 320 West Berkeley companies employing 6,500-7,000 men and women engaged in production, distribution, repair and recycling, and the 1,000 working and performing artists based in the district. The great majority of these companies and artists rent their space. Because they cannot afford office, retail or residential rents, they require industrial zoning; absent such zoning, property-owners will seek more lucrative tenants. Thanks to land use laws stemming from the far-sighted 1993 West Berkeley Plan, the city still has a viable industrial/artistic sector. And the existing zoning has done more than maintain production enterprise and employment and artistic endeavor; it’s also underwritten a diverse economy: West Berkeley is home to laboratories, retail shops, professional offices and residences, as well as manufacturers, wholesalers/warehousers and artists.

This diversity is now threatened by an attempt to open most of West Berkeley’s industrial lands to massive office and lab development. Complying with a 2007 directive from the city council, the planning commission has been considering zoning changes that would eliminate “obstacles to development and provide increased flexibility in terms of land uses and building types” in West Berkeley. On July 8 the commission will discuss the most significant of the proposed changes, a so-called Master Use Permit that would allow unlimited aggregation of parcels, heights up to 90 feet and, in an area where parking is already scarce, extensive parking waivers.

The MUP and most of the other proposed revisions to the zoning are staunchly opposed by members of West Berkeley Artisans and Industrial Companies (WeBAIC — sounds like we bake); WeBAIC supports new zoning that would allow new clean green tech to be built on five big “underutilized” sites that together could accommodate 4-6 million square feet of development, leaving room for light industry, green collar enterprise and the arts in the rest of the district.

At repeated commission meetings, WeBAIC members, along with a growing number of West Berkeley residents, have demanded a substantial role in the planning process, contending that the changes under consideration would damage if not destroy their community and commerce. Their persistence and eloquence appear to have impressed the commission, though how much so will be clear only when the body takes action. In any case, the city council has the final word, and since on July 23 the council goes into a two-month recess, nothing will be finalized until the fall at the earliest. But as Part II of this report will relate, city staff, UC/LBL and their mega-developer ally aren’t waiting until new zoning has been passed to push outsized biotech in West Berkeley.