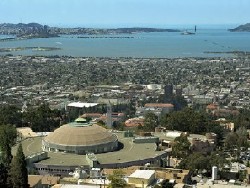 On June 26 the East Bay Green Corridor partnership held its second annual summit at the Oakland Museum. Part one of this article (July 7) began to chart the gap between the partnership’s rhetoric of shared green prosperity and its reality of disparate power and access. Part II tells how, in the name of green economic development, three of the consortium’s members — UC Berkeley, Lawrence Berkeley National Laboratory and the City of Berkeley — along with a formidable developer, are working to dismantle the industrial zoning that has sustained West Berkeley’s diverse community and economy, and what their effort bodes for the region’s future.

The City of Berkeley isn’t waiting for new zoning to foist an outsized biotech project on West Berkeley. On July 2 planning staff urged the Zoning Adjustments Board to approve Wareham Development’s application for a 4-story, 92,000 square foot spec lab at 740 Heinz (across the street from Magic Gardens nursery). The building requires two variances: one for its 74-foot height (existing allowable height is 45 feet), the other for its floor-to-area ratio of 4 (the existing allowable FAR is 2).

Planners like to say that variances are hard to get because they require existing development standards to be violated. The Berkeley Zoning Ordinance stipulates that an applicant seeking a variance has to show that “exceptional or extraordinary circumstances” are at hand, and that the approval of an application is necessary to preserving substantial property rights of the subject property’s owner. Noting in a handout that the neighborhood of 740 Heinz contains numerous biotech facilities that comply with the current zoning, West Berkeley Artisans and Industrial Companies [WeBAIC — sounds like “we bake”] contended that “the only ‘exceptional or extraordinary circumstances’ applying to this property is Wareham’s ‘extraordinary’ desire for greater profit than present standards allow.”

That view was shared by developer Michael Ziegler, the owner of the nearby Temescal Business Center, whose tenants include Xoma pharmaceuticals. “Four stories,” Ziegler told the ZAB, “is out of scale … and not required to make it a profitable project … If you grant these variances, you’re aggrandizing one property owner over another” and “hijacking a public [planning] process that’s been going on for two years.” The ZAB majority turned a deaf ear to Ziegler and the eleven other West Berkeley neighbors and businesspeople who spoke at public comment, all in opposition to the project; Wareham’s application was approved on a 6-3 vote. On July 7 the city council certified the ZAB’s action and set a public hearing on the project for its July 23 meeting.

In pushing to weaken West Berkeley’s protections for industrial uses and thereby throw open the district to unlimited biotech and office development, city officials have two powerful allies: UC Berkeley and the Lawrence Berkeley National Laboratory (LBL). The pitchman for the two institutions is Michael Cohen, Director of the University’s Office of Technology Licensing (Cohen also sits on the ZAB as Councilmember Gordon Wozniak’s appointee but did not attend the July 2 meeting). At a November 2008 symposium at Cal, Cohen made an elaborate powerpoint presentation entitled “East Bay Green Corridor Partnership: Leveraging UCB & LBL Green Start-ups.” Under the heading “What Could Help & Next Steps,” he listed “Smart zoning & development,” followed by a cryptic reference to “Silent majority versus noisy few.” There was nothing cryptic about his position at the February 2009 meeting of the planning commission. Joining the pro-“flexibility” lineup assembled by city staff, Cohen argued that “flexibility” could enable the city to retain more start-ups coming out of Cal and the Lab. “Most communities,’ he said, ‘could only dream of having this kind of opportunity.’”

Quoting Cohen by name, Wareham partner Chris Barlow repeated that remark verbatim to the ZAB on July 2. The citation was hardly fortuitous; Wareham has extensive ties to both UCB and LBL. Though Wareham’s office is in San Rafael, most of the firm’s 4 million-plus square feet of property is in the East Bay, with the bulk in Berkeley and Emeryville and most of the space leased to “life sciences” tenants. The parcel at 740 Heinz is surrounded on three sides by Wareham’s 15-acre, 500,000 square foot Aquatic Park Center. The Center’s tenants include Bayer Pharmaceutical, Xoma and the Berkeley West Biocenter, an outpost of LBL. Wareham’s numerous Emeryville tenants include the two companies that UCB Professor of Biochemical Engineering Jay Keasling cited in his keynote speech at the June 26 summit as examples of green tech spin-offs from Cal and the Lab that have stayed in the East Bay: Amyris Biotechnologies and the Joint BioEnergy Institute. At the summit, nobody on the dais mentioned Wareham, but the firm was discreetly represented by a highly produced brochure lying on one of the display tables. Such subtlety was nowhere in evidence at the Berkeley planning commission’s February meeting, where Barlow lauded “flexible” zoning and the benefits it would purportedly bring the whole city.

But the most outspoken supporter of zoning “flexibility” is Corridor chair Berkeley Mayor Tom Bates. Like his city’s staff, UC/LBL’s Cohen and Wareham’s Barlow, Bates presents such deregulation and the attendant proliferation of biotech labs as the necessary condition of future prosperity. Unlike them, he openly concedes that the changes they all seek will force industrial businesses — that is to say, businesses engaged in the production, distribution, repair and/or recycling of things—out of Berkeley.

For Bates, that’s not a problem. At the Corridor summit, he opined that solar panel manufacturer SunPower’s 2007 departure from Berkeley for Richmond was nothing to regret. “It’s okay,” he said.“We’re not really losing them. Our people can go to Richmond and San Leandro to work.” It was a remarkable statement; you don’t often hear a mayor shrugging off the loss of a big, green business and the accompanying jobs and revenue. Bates, however, has repeatedly discounted the importance of Berkeley’s industrial sector. WeBAIC reports that at the January 2008 publication party for SF State Professor Raquel Pinderhughes’ pioneering study of green collar jobs (which was commissioned by Berkeley), the mayor asked, “What’s the problem if [these jobs] go to Oakland or Richmond? … Maybe we won’t make anything here anymore.”

Here’s a more plausible interpretation: The Berkeley mayor is actually relieved to see production jobs leave his town, because he thinks they’re doomed. In March 2005 Bates advised the city council that “[w]e can no longer sit back and say we have to have manufacturing here, when manufacturing is closing.” Many would agree. If they’re right, then dismantling Berkeley’s industrial zoning is the only sensible course, and sending industrial enteprise to neighboring cities is like dumping garbage, not sharing wealth.

That millions of U.S. manufacturing jobs have disappeared in the past forty years is undeniable. But to assume that we no longer make things in this country — or region — is simply wrong. In a series of meticulously researched reports done in 2004-2008 for the Metropolitan Transportation Commission, Oakland economist Linda Hausrath found that goods movement industries — businesses that supply, produce, warehouse/store sell, transport and deliver goods, “play a critical role in the Bay Area economy.” In the two major corridors she studied — East Bay I-80/880 from Richmond to Fremont and U.S. 101 from the San Mateo County line to Millbrae/Burlingame — such businesses account for nearly half of all employment. They also “provide good-paying, blue/green collar jobs near the urban workforce.” Moreover, Hausrath identified a growing demand for goods movement activity in the central corridor locations. The problem is that the industrial land needed by these businesses is disappearing, due in part to “land use policies that allow and/or encourage new [higher-intensity] uses in many industrial areas.” In the East Bay I-80/880 corridor, 38% of the industrial land is “at risk.” If that land is converted to non-industrial uses, goods movement businesses will be forced out of the central areas. Their displacement would occasion a major loss of quality work for a diverse population, as well as increased air pollution, traffic congestion and transportation costs. In the interest of “maintaining a healthy and competitive regional economy,” Hausrath calls on local authorities “to promote the balance of goods movement/industrial uses in proximity to businesses and poulation centers.”

To judge from their concerted campaign to undo West Berkeley’s industrial zoning and the inclusive economy it supports, the East Bay Green Corridor’s most powerful members are promoting a different sort of balance — the sort associated with the maximum return on their investments. As their most candid apologist, Tom Bates, told the crowd at the Oakland Museum, “To me, green is really the dollar bill.”