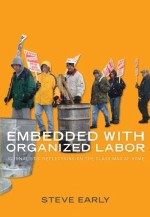 Steve Early is known for his strong opinions on the United States labor movement, and his often biting critiques of Andy Stern’s leadership of the Service Employees International Union (SEIU). But Early’s new book offers an amalgamation of essays and diversity of perspectives that include even strongly pro-SEIU assessments, and even those who disagree with Early’s core premises will benefit from reading his arguments. Embedded with Organized Labor surveys nearly every prominent book written about the U.S. labor movement over the past three decades. Early’s thoughtful, critical, and, yes, often controversial analysis of the labor movement is likely unmatched in any other single volume, and the best part is that he consistently uses labor’s past decisions and strategies as a guide for future action. Whether you share his conclusions or not, Early has given book groups and labor activists a wealth of material to discuss in every chapter, contributing to a much needed debate on the best strategies for building worker power.

During Steve Early’s thirty-year career with the Communication Workers of America, he found time to write over 300 articles on the labor movement. Those familiar with his writings know he has strongly held views, but the essays in this book show Early preferring intellectual and empirical arguments over emotional appeals, and eager to stimulate debate rather than insisting upon agreement.

This is a book for those who seek to strengthen the labor movement, and are interested in past and current critiques of how unions have often failed to fulfill their promise. Early shows how critics have long questioned labor unions over internal democracy, ideology, and organizing prowess, and how this criticism increased as labor’s power has declined over the past four decades. Early discusses many of these trenchant critiques, showing a union movement so badly out of step with the times that pro-NAFTA Bill Clinton was elected as the first Democratic President in 16 years without much labor backing.

Early reminds us of how John Sweeney’s ascension to AFL-CIO President in 1995 raised hopes for an invigorated labor movement. He analyzes the basis for such optimism, and why it dissipated as the revitalized labor federation was unable to stop union membership loss, particularly in the private sector. By discussing books written when hopes for Sweeney were highest, Early reminds us of a time that seems far more distant than fourteen years. Early makes a convincing case that Sweeney was never capable of being an inspiring turnaround specialist, and that the dream of rising labor power associated with his presidency was never realistic for many reasons, particularly the AFL-CIO President’s lack of power to require unions to increase organizing.

The next phase of books reflecting rising hopes for labor surrounded the creation of the Change to Win labor federation in 2005. Early was clearly no advocate of Andy Stern’s decision to lead SEIU out of the AFL-CIO, and the recent SEIU-UNITE HERE split and the effective dissolution of Change to Win at least retroactively confirms opponents concerns over the move. I found this section of the book the most thought-provoking, as Early raises a number of questions about the route to building a powerful labor movement that deserve greater discussion.

For example, consider the Andy Stern-Change to Win strategy of bringing in progressive activists from outside the labor movement to run locals. Many saw this move as essential for unions to provide the activist and creative leadership they long lacked. We all knew stories of SEIU and UNITE HERE chapters whose local leadership defied international union policies toward diversity, organizing and progressive change, so the idea of replacing this dead wood with quality leadership appeared quite attractive.

But Early cites a number of SEIU leaders brought in outside the ranks of workers who seemed to have little understanding of how unions operate. He suggests that such outsiders often lack a real connection to the workers they represent, and owe their allegiance less to rank and file workers then to the international officials that appointed them. Early argues:

Early’s criticisms of outside leadership deserve debate. But it is worth noting that until its recent demise, the Change to Win labor federation was far more progressive and activist oriented than the AFL-CIO. While Early claims that there is “little evidence” for Ruth Milkman’s argument in her L.A. Story (which I gave a glowing review) that “CTW unions, with the exception of SEIU and perhaps HERE, have responded more effectively” to the political and economic transformations of the past thirty years, Early undermines his critique by essentially eliminating the two unions that best prove Milkman’s case. And when one considers the always on the defensive and longtime anti-clean air UAW, and recall Tom Buffenbarger, president of the Machinists’ union, ridiculing Obama supporters on the night of the Wisconsin primary in 2008 as “latte-drinking, Prius-driving, Birkenstock-wearing, trust fund babies,” its clear there are strong cultural differences between the two federations.

Early also questions the SEIU/Change to Win recruitment of idealistic young college grads as organizers, instead of primarily relying on longtime workers. While many recent college grads became great organizers – like SEIU Local 11’s Eric Brakken, whose role in the successful 2006 University of Miami janitors campaign is discussed in my book, Beyond the Fields, many unions have cutback on college recruitment due to high turnover. Again, one does not have to agree with Early to appreciate his raising the issue for debate.

Early ends his book with two previously unpublished chapters, one on the SEIU/NUHW battle in California and the other whose title reflects the author’s clarion call for “Reading, Writing and Union Building.” Early cites a publisher’s warning that authors seeking large audiences should “not write books about and for trade unionists,” as the movement does not “buy and read books that are written for us.” Savvy strategist that he is, Early then goes about trying to convince labor unions to recognize the importance of marketing union-oriented books. He provides detailed instructions on how unions can benefit from marketing labor books, and I wish him the greatest success in this campaign. The self-interest of labor authors aside, Early’s passion for a labor movement that prioritizes union democracy requires the encouragement of rank-and-file reading, and providing workers the skills and education they need to effectively run increasingly complex labor organizations.

If workers are educated in organizing and political strategies, fully understand their contracts, and know the past history of their bargaining unit’s relations with management, then strong and effective leadership will likely emerge from the rank and file. But if workers remain uninformed, uneducated and unskilled in labor strategies and the bargaining process, then outside leadership becomes essential for effective union management.

Although unions should heed Early’s call to invest in books promoting the labor movement – after all, the business community spends enough to ensure books touting corporations become bestsellers – this is unlikely to happen. But Early’s quest speaks to his continued idealism in the face of thirty-years of union decline that could have easily left him cynical about the prospect for the United States ever achieving a progressive labor movement. Early can be a strong critic, but he insists that those seeking union democracy and greater worker power keep hope alive.

Steve Early will be discussing his book along with other Monthly Review authors at San Francisco’s Modern Times Bookstore on Tuesday, June 9 at 7:00 pm.