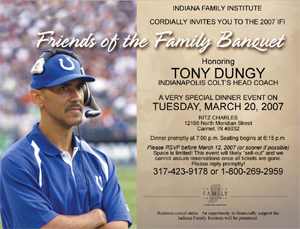 “Daddy, will we ever get a football team here?” asked a little black boy growing up in Indianapolis in the mid 70s. The little boy was from a sports family. They played sports. They watched sports. They talked sports. The little boy and his two older brothers had big sports dreams. The brothers were descended from sports legacy. Their dads and uncles had done great things in the 1950s, when the all-black basketball team at Crispus Attucks High School was dreaming big for the whole city. The brothers knew sports. The brothers lived sports. Pacers. Racers. Our own tribe down at the old Victory Field. But no big league football team. And the littlest brother wanted the city to have a football team. “Too small and too close to Chicago and Cincinnati” was the father’s response, dousing the boy’s hopes with a dose of fiscal reality.

That little black boy was me, and while the road of life has taken me far from Indianapolis, my roots remain in the fields of my childhood dreams (Tabernacle, Ransburg, Riverside, Municipal Gardens, our backyard, just to name a few). I’m 45 now, and have lived in Southern California for most of my adult life. But my heart, and sometimes my physical self, has never been much more than, well, a heartbeat from the Indiana sports scene.

So imagine my delight when, while a student at UCLA, I heard that a dome stadium was rising up out of the ashes of a decayed downtown that was coming back to life in the Circle City.

Imagine my delight when news came that a team, a well-established team at that, was coming to Indianapolis to call the Hoosier Dome home.

Imagine my delight as I sat in the LA Memorial Coliseum, beaming with civic pride as the Raiders battled my hometown Indianapolis Colts in their very first season.
Imagine my delight as I watched from the end zone at Anaheim Stadium as Eric Dickerson returned to his old stomping grounds as a Colt (then imagine my trepidation as I hunkered down amidst the rowdy fans who felt betrayed by the running back and were out for blood).

Imagine my pride as I witnessed the Indianapolis Colts put their own stamp and identity on the NFL, from the Monday Night Halloween party to the Harbaugh Hail Mary in Pittsburgh to the coming of the One from Tennessee.

Imagine my pride as the Indianapolis Colts conquered their Patriot demons in one of the greatest playoff games ever. Imagine that pride swelling for two whole weeks while our city—our city, our Naptown—was a superstar at the Super Bowl. Imagine that pride swelling even greater as two black coaches made history at the game. As if someone was saying, “Yes, little boy, there is a Santa Claus and he’s shining down on Indianapolis right now.”

Now imagine that pride and joy turning to disappointment when, only days after the Super Bowl, the little boy finds out that Indianapolis Coach Tony Dungy’s actions support banishing that little boy and his dreams to hell. Or back to the Dark Ages, where the rule of the day was: convert to our Christianity or be put to death.

And the little boy had once thought: we’ve come so far.

You see, the little boy with big sports dreams for himself and the city of Indianapolis morphed into a man who happens to be homosexual. For whatever reason. However it came to pass. My homosexuality is as much a part of my soul as the sports fields of my childhood dreams. And for whatever reason, however it came to pass, Tony Dungy has chosen to align himself with the Indiana Family Institute, an organization whose purpose is to force its Biblical will on America and oppress all things homosexual. He even spoke at their fundraiser on March 20, effectively raising funds to bring me down.

Imagine feeling less than human when a man who preaches so much love like Tony Dungy apparently has no love for me and “my kind.” Imagine being told by society (once again) that you and your dreams are worthless on one hand, and worth suppressing and destroying on the other.

Tony Dungy knows the unimaginable pain of losing a child to suicide, a grief many wouldn’t wish upon any parent, regardless of the circumstances. Perhaps Tony Dungy should also know that, of all the kids contemplating ending their lives at this very moment, many are doing so because they’re worried they might be gay. As many as a third of all teen suicides, according to one study by the U.S. Department of Health and Human Services. These are kids who might not even be gay. Or might be gay. Or might be “just trying to figure out life.” But they choose to extinguish their light rather than face a world that still doesn’t accept homosexuality.

I have no knowledge of the personal lives of Tony Dungy and his family. I commend his achievements in football and wish him well. I also hope that Tony Dungy comes to realize that homosexuality is not going away, and to deny homosexuals access to the American Dream is doing the exact same thing previous generations tried to do: keep women from voting, segregate blacks, and so on and so on.

It’s hard to imagine rooting for the defending champion Indianapolis Colts next season, knowing how intolerant Tony Dungy and much of the sports world remains, even as the rest of society evolves. So instead of putting my faith in the Colts, I’m going to use that energy to imagine a better world and a better dream for the man and the little black boy who once roamed the fields of Tabernacle, Ransburg, Riverside, Municipal Gardens, our backyard.

I’m going to imagine Tony Dungy learning to accept homosexuals and homosexuality, if for no other reason than to create a world in which kids won’t turn to suicide as a way to deal with their sexuality.

I’m going to imagine Tony Dungy becoming enlightened by one of his players, perhaps a player who is homosexual or is close to someone homosexual. I’m going to imagine Tony and this player having open, honest discussions about their beliefs and feelings. I’m going to imagine Tony and this player agreeing to disagree but agreeing to not pass judgment and not interfere with the other’s pursuit of the American Dream. I’m going to dream of all the NFL coaches learning to live with or deal with or tolerate or accept without judgment or open their hearts to all players regardless of sexual orientation. It may seem like an unrealistic, child-like dream, but I remember a little boy who once dreamed his city would someday get a football team and do great things, even though the odds were stacked against his city and his dream.

Yep, I’m a big dreamer. Dreams have kept my soul alive, sports dreams, life dreams, dreams like another dream I remember asking about around the same time I asked my father about Indianapolis getting a football team.

“Daddy, will black people ever be treated the same as white people in this country?”

“Long way off” was my father’s response. “Maybe in a hundred years.”
We still have a long way to go, thought the little boy.

Randy Boyd is the author of Walt Loves the Bearcat, the epic sports novel featuring the first out superstar athlete. A five-time Lambda Literary Award nominee, Randy is a native of Indianapolis. For more information, visit westbeachbooks.com. Copyright © 2007 by Randy Boyd All Rights Reserved