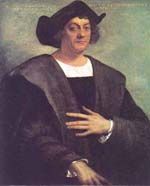 Questions of human and civil rights, a tumultuous legacy and the checkered story of Genoa native, Christopher Columbus makes it difficult for some to support the idea of a Columbus Day holiday. A literary protest dubbed ‘Dumping Columbus’ is staged this evening at Modern Times Bookstore to benefit St. Peter’s Housing Committee. The event is the brainchild of a group of Italian-American writers and performers who believe that Columbus is no kind of hero to celebrate or commemorate. “We thought it would be good to have a benefit on Columbus Day that actually benefits immigrants,” said performer and social justice activist, Tommi Avicolli Mecca.

“St. Peter’s Housing Committee serves Spanish-speaking tenants in the Mission. It helps them battle illegal evictions and rent increases or (battles) for home repairs in case a landlord (illegally) refuses.” The housing committee is a part of Deporten La Migra, (Deport the INS Coalition) that protests landlords’ use of the INS as a tool to evict tenants. The coalition has also used non-violent direct action to confront the Minuteman Civil Defense Corp: an organization dedicated to securing American borders against illegal immigration and cutting illegal immigrants out of the workforce.

Giuliana Milanese organized Italian-Americans against Christopher Colombus for the 1992 500th year anniversary of Christopher Columbus’ landfall. “I am a first generation Italian-American immigrant. Italian-Americans went through some hard times in terms of discrimination. It’s an issue of I hurt when I came here – why would I hurt others? We have many things to be proud of, Sacco and Vanzetti – there are others. Do the children know this history? But the invasion of this country isn’t one of them. They built an empire on the destruction of Native-Americans. This is a global issue, how invasions have caused the genocides of so many peoples.”

Dumping Columbus is meant to highlight some of the inconsistencies in the modern mythos surrounding Christopher Columbus and in a broader sense, the American legacy of colonization and immigration. “Columbus Day began as a sort of Italian-American pride day. When we came here in the 19th century there were a lot of stereotypes. We were considered criminals – even subhuman. The day was instituted to give some pride to Italian-Americans. But Columbus claimed Hispaniola for Spain – he wasn’t even an Italian before sailing. Italy at that time was a bunch of city-states. It’s ludicrous that Italian-Americans claim the day” said Mr. Avicolli Mecca.

“The alternative for Columbus Day is Indigenous Peoples’ Day,” said event organizer James Tracy. “We also need a holiday celebrating positive Italian heroes, Sacco and Vanzetti. They were labor organizers in the 20’s framed up for a murder they didn’t commit and then executed. It’s a pattern that has unfortunately repeated itself. We think it’s important to challenge racism. We want Italian-Americans to remember that when Minutemen vigilantes take action against our brothers and sisters from Latin America that our ancestors experienced that type of discrimination a few decades ago. Our strength lies in our solidarity with the oppressed, our ability to challenge white privilege and to take action and build collective liberation for everyone.”

The line-up includes Mr. Avicolli Mecca presenting an excerpt from his one man show, italian.queer.dangerous. James Tracy is a San Francisco housing activist and poet in the Molotov Mouths Outspoken Word Troupe. Giancarlo Campagna played the role of Fr. Daniel Berrigan in the Trial of the St. Catonsville Nine at St. Boniface Theater and will read original works. Maria Poblat is a member of Deporten La Migra and a staff person with St. Peter’s Housing Committee. She will present original poetry. Giuliana Milanese will speak about Italian-Americans and the Christopher Columbus legacy. The event is at 777 Valencia St. and starts at 7:30pm. Suggested donation is $5.