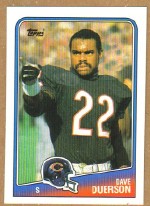 The gruesome decades-long underground American saga that is the football concussion crisis has never gotten in our faces quite like the story of the suicide last week, at age 50, of one-time National Football League defensive player of the year Dave Duerson.

How many levels are there to the news that Duerson put a gun to himself, but not before texting family that he wanted his brain donated for research on the brain-trauma syndrome now known as chronic traumatic encephalopathy (CTE)? Let us, like Elizabeth Barrett Browning, count them. It begins with the fact that he shot himself in the chest – perhaps with supreme confidence that by avoiding his head and leaving intact his postmortem brain tissue, it will confirm that he is around the 21st diagnosed case of CTE among former football players.

Duerson is the latest casualty of a sport that has evolved, via training technology and industrial design, into a form of gladiatorialism whose future human and economic viability is questionable. The New Yorker and New York Times have started assessing this cultural phenomenon with their own brands of competence and Ivy League restraint. From the closeted gutter of pro wrestling, where all the same venalities play out with less pretense, I’m here to tell “the rest of the story” – such as how the same corrupt doctors who work for the NFL also shill for World Wrestling Entertainment, and how it’s all part of the same stock exchange of ethics for profits and jock-sniffing privileges.

I would not be hasty to label Duerson a “victim”; for most of his 50 years, he was personally driven to make particular professional choices. But the thing that fans … parents … people … still haven’t wrapped their minds around is the magnitude of the toll of the Dave Duersons at the amateur level, and below the age of consent, via a nationally unhealthy system of dangled glory and riches.

And with Duerson, there’s a wrinkle taking journalistic and governmental investigations of this public health issue into its murkiest waters yet.

Duerson was not just a leader of the record-setting – and skull-crunching – defense of the 1986 Super Bowl champion Chicago Bears. He was also a member of the six-person NFL committee that reviewed the claims of retired players under the league’s disability plan and the so-called “88 Plan,” a special fund to defray the costs of families in caring for players diagnosed with dementia.

Don’t look for this last to be prominent in Duerson retrospectives. We can count on quotes from fellow ex-NFL lions about how scary it all is, and we can count on further details on Duerson’s bankruptcy and collapsed personal life, but we’re not likely to get into the 88 Plan files he was helping process.

When news of Duerson’s death broke, but before the suicide details emerged, the NFL was first out of the gate with a preemptive statement of condolence. It’s in keeping with a strategy of triangulation that has been its hallmark ever since it became apparent that research articles in clinical medical journals such as Neurosurgery – literature largely written by NFL-paid doctors, including the Pittsburgh Steelers’ Joseph Maroon, who is also medical director for WWE – consciously lowballed the evidence on CTE for many years. The Neurosurgery reverse-hype also deftly promoted for-profit diagnostic stopgaps, such Maroon’s “imPACT” concussion management system and the Riddell helmet company’s “Revolution” model. The latter is now the focus of a Federal Trade Commission investigation undertaken at the request of Senator Tom Udall.

If Duerson and other NFL players had been taught to tackle as carefully as the NFL manages its PR, then the annual national concussion total, conservatively estimated at around four million, would have been immediately halved.

The league recently launched a new website, http://nflhealthandsafety.com, with exquisite timing and calculated transparency. The site touts the NFL’s $20 million in funded research, without examining exactly what that $20 million has bought.

The site’s Media Center also links to important stories in the news. As this article was being submitted to Beyond Chron, the top one was “Debate arises concerning use of helmets in girls’ lacrosse” (New York Times, February 17). Well, let’s see how nflhealthandsafety.com covers Dave Duerson’s suicide. Let’s see, for example, if it links to this one.

Irvin Muchnick, author of CHRIS & NANCY: The True Story of the Benoit Murder-Suicide and Pro Wrestling’s Cocktail of Death, is @irvmuch on Twitter and blogs at http://wrestlingbabylon.wordpress.com.