Driver’s Ed from the Pope 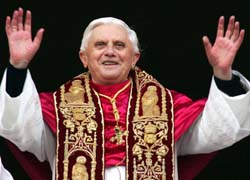 The former Cardinal, who once headed the modern-day version of the Roman Catholic Church’s “Holy Office of the Inquisition” (the same one that murdered countless heretics and drove the Jews from Spain), is now taking aim at one of industrial society’s most maligned groups: Drivers. Obviously, he doesn’t have much to do in Rome these days. At least he’s not bashing us “intrinsically evil” queers, as he’s done countless times in the past.

In a 36-page document entitled “Guidelines for the Pastoral Care of the Road,” the Pontiff writes: “Cars tend to bring out the ‘primitive’ side of human beings, thereby producing rather unpleasant results.” Religion, too, but somehow the Pope forgot to mention that.

What I wasn’t expecting among the Pope’s Ten Commandments for drivers is an admonition not to use the car as “an occasion of sin.” Shades of Sister Mary Holier-Than-Thou in the fifth grade. When asked for an explanation at a news conference, Cardinal Renato Martino told Reuters, “When a car is used as a place for sin.” George Bush couldn’t have given a stupider response.

Memo to Benedict XVI: Cars have always been “a place for sin.” Ask anyone who grew up in the 60’s and 70’s.

My trips from Philly to New York in the early 70’s would have been merely car rides without a lot of naughty busy work. I was crazy in lust with this guy. The New Jersey Turnpike was dark at night, affording us the perfect cover to slide down in the back seat and neck and grope to our heart’s content. Saj, the driver in the front, warned us if a state trooper’s vehicle suddenly appeared within view. He did his share of touchy-feely stuff with his ex in the front seat. A splendid time was guaranteed for all.

Queers weren’t the only ones doing it in moving vehicles. My brothers and their friends took their girlfriends down to a special grassy area of South Philly where couples pulled over and engaged in the sort of behavior that would’ve given the pontiff gray hairs or maybe an education in human sexuality.

Happily, car nookie hasn’t lost its appeal. Occasionally, I see a listing in the “Men Meeting Men” section of Craig’s List from someone who wants to relive his adolescence by having sex in a car.

Before he condemns it, the Pope should try it.