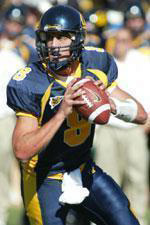 Readers of my article last week about the future of Cal football will recall that I characterized the Los Angeles Times Magazine as “ineptly quarterbacked” by executive editor Drex Heikes. This gave rise to a colorful email exchange with Heikes, whom well-placed sources within the journalism community describe as unlikely to give me any future assignments.

The crux of my indictment of Heikes was a September 5 cover story, “He Shoots. He Scores. He Studies,” by a New York writer named Stephen L. Cohen. That article, I asserted, was not only shallow but also propagandistic because of its central feature, the touting of a spin-stat: Cal’s supposed 73% student-athlete graduation rate. Cohen’s failure to break that number down sport-by-sport and soberly assess the heart of the matter – the real academic performance of athletes in the hyper-commercialized sports of football and men’s basketball, 99-plus percent of whom do not proceed to substantial careers in the National Football League or the National Basketball Association – was an obvious flaw, and in my opinion a fatal one.

In addition, I shared my own experience of being edited by Heikes for my August 2003 article in the Times Magazine, “Welcome to Plantation Football.” That piece, assigned by Heikes from his own idea, was about the collective action of some athletes in the college “revenue” sports to seek compensation more equitable than their current “free ride” scholarships, which turn out to be neither free nor rides.

Specifically, I mentioned Heikes’ deletion of a pointed reference to Rashidi Wheeler, the football player from Southern California whose death at an August 2001 practice at Northwestern is the subject of a high-profile lawsuit. Heikes replaced that reference with one of his own, about a University of Oregon player who got suspended for four games for trading complimentary tickets for a break on his rent. I noted that Heikes is an Oregon alumnus and football season ticket holder. The implication – again, I believe a fair one – was that he had an agenda for which a hard-hitting look at the realities of the college sports industry was at best incidental.

I have to admit that Heikes’ opening email salvo to me had moments of generosity and drollery. My Beyond Chron essay was a “nice piece,” he said. “Thoughtful and well-argued.” But about the magazine being “ineptly quarterbacked”? “Please. I was, and remain, an inept defensive lineman.”

“We chose Cal [for Cohen’s story] not for the graduation rate alone but also because of the other improvements made there,” Heikes added. “We did so after asking NCAA officials which college athletics program they thought we could review when trying to determine whether any school was doing it right these days.”

As for the edits in my story, “We made them because the string of examples you used was not specific. Quinn Dorsey’s bad judgment at Oregon gave us a real name and a real example from another campus.”

In reply, I begged to differ. I said the citation of “NCAA officials” as Cohen’s master source didn’t exactly reek of credibility. And Rashidi Wheeler, I noted, was from Ontario, California, “where the Times has a few more readers than in Eugene, Oregon.” One of the main points made by the student-athletes in my article “was that they put their bodies, and sometimes their lives, on the line.” I suggested that disinterested readers could decide for themselves “what they think motivated you to sub an obscure tickets-for-rent scandal for a passage involving death and the hot-button issue of ephedra (or decide not to use both examples).”

Heikes had the last word, as editors usually do. “Rail on,” he sniffed. “It’s the refuge of the powerless.”

For those of you who want to join the dialogue, Heikes’ email address is drex.heikes@latimes.com. Mine is webmaster@muchnick.net.

Another Beyond Chron reader sent me a fascinating document: an October 29 fundraising letter over the signature of Coach Jeff Tedford.

By far the letter’s most important paragraph is the P.S. “Your gift to Cal Football,” Tedford says, “earns you Bear Backer benefits. Call the Cal Athletics Development Office at 510/642-2427 if you have questions about benefits or ways of giving.”

One can hardly fault Tedford for striking while the iron is hot, in the middle of a successful season on the field. The most interesting thing about the letter, however, is how it extols the success of his program off the field.

“Our coaching staff does not take the term student-athlete lightly,” Tedford says. “We are committed to the enhancement of each student’s academic development and goals. As an example, our team’s GPA has increased each semester since our staff arrived in December 2001. This, and our rising graduation rate, is an example of how our players are fulfilling their promise in the classroom as well as on the playing field.”

The reason for “this academic shift,” the coach concludes, is “directly linked to our ‘Academic Gameplan’ and the continued support of our Athletic Study Center.. We need your support to keep this important work going.” With the help of boosters “we are able to purchase more laptop and desktop computers for our student-athlete’s [sic] use, hire additional tutors and advisors, update our technology for our workstations, and build quiet study areas for our student-athletes.”

Far be it from me to accuse Tedford of anything worse here than enlightened self-interest; his sincerity might be at issue in some quarters, but not this one. No, this letter is straight out of the fundraising playbook of Amos Alonzo Stagg – play-faking apples into the middle of the line as a prelude to heaving oranges downfield. And with good reason. As the chancellor of my alma mater, Vanderbilt University, used to say, “Restricted gifts are . restricting.”

The apples in this case are Cal Football donations; the oranges, Athletic Study Center (ASC) donations. The rhetorical sleight-of-hand insinuating that the two are one and the same convinces me, more than anything else, that Tedford has a bright future in the coaching profession.

I had thought (as did readers of the September 5 Los Angeles Times Magazine cover story) that the whole point of the ASC was that it was autonomous from the Athletic Department. University flacks make a big deal out of the fact that the ASC appears on the administrative flow charts as “a unit of the Division of Undergraduate Education.”

If Tedford’s aim were to promote the study center, rather than just coopt it, he might have used his letter as an opportunity to invite boosters to read about and even contribute directly to it. (Any of you who are interested can go to http://asc.berkeley.edu/. An online donation form is at https://colt.berkeley.edu/egiving/MainForm.ASP.) Let’s not even get into the failure to supply hard data to support the claims of rising GPA’s and graduation rates.

Let’s also give Tedford the benefit of the doubt. In that case, I’d like to propose that the remarkable turnaround of the Golden Bears on his watch falls under the category of “no good deed goes unpunished.” Having skillfully righted the ship of Cal football, academically as well as athletically, in less than three years, Tedford is in the unique position to send the unambiguously right message. He can tell the University of Washington that he’s not interested in taking the job there and returning the Huskies to their glory days. He can waive his option clause at Cal and sign a new five-year contract, here and now.

Meanwhile, needless to add, the prospect of more computers, upgraded technology, and quiet study space has intrinsic value. In some new state-of-the-art locker rooms, I hear, every player’s stall is equipped with his own PlayStation. Come to think of it, I might have read that one of them is at the University of Oregon’s Autzen Stadium, which undertook a $90 million expansion and renovation, funded largely by Nike. Or am I confusing true-blue Oregon with one of those nasty football-factory red states?

I think I’ll email Drex Heikes and ask him.