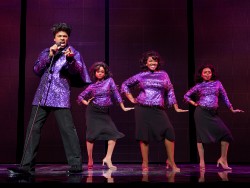 THE DREAMS YOU’VE BEEN WAITING FOR!

If you liked the new version of ‘Chicago’ with its eye-popping lighting and visuals, you will certainly be thrilled with this new stage versions of ‘Dreamgirls’ at the Curran. Most of the attention is given to the role of “Effie” and her story IS touching, but there is a love and hate relationship with the always contrary ‘Effie’ Character. Right from the very beginning of her Career, nothing satisfies Effie. “I Don’t Do Backup” she says, when she and the other Dreams are offered to sing backup for James “Thunder” Early (based on James Brown.) Effie is self-destructive.

Look, here’s the deal. Even if you have seen “Dreamgirls” a Zillion times – you have never or ever will see another actor singer like Chester Gregory (James Early), who is so Electrifying, that he could power the whole City of San Francisco. To me, he is the main powerhouse star in this glitzy show.

The production is slick beyond belief. They have taken the show to a new High Tech level that really shows what imagination and Creativity can do. This stunning blend of story, music, grit, sensuality and multi-media make this a groundbreaking event that makes for a richly rewarding gem of a show! I don’t think there is any danger of you falling asleep. This new production has 465 dazzling Costumes and believe it or not they travel with 205 wigs. There are many quick costume changes in the show (3-4 seconds – Effie’s (Moya Angela) on-stage transformation) in “I Am Changing.”)

Of Course, the song that everyone is waiting for is the “And I Am Telling You I’m Not Going?” Great song, but every singer that sings it seems to be competing to make it more and more loud. It’s a wonderful melody that gets lost with all the hysteria. It’s supposed to sound like someone is deeply hurt. But, screaming at them is not going to help the situation. However, the audience raved and jumped out of their seats. So, there you have it.

As the Dreams turn into the Dreamettes and then into the Dreamgirls – the musical numbers become more spectacular. The Costumes get more outrageously gorgeous, and the Wigs get higher and higher – and the music, gets mellower for the White audiences.

The Lighting Towers that move all over the stage are lit up with spectacular lighting and give the whole show a look and feel off being right on Broadway. You become part of the back stage story about the struggling young singers who make it to the top of the recording world. Their Dream came and went as the music changed, and new voices popped up. “You’ll wonder why every musical can’t be this good!”

Syesha Mercado plays the sweet innocent Deena Jones who goes from backup singer, to stabbing her best friend Effie in the back to be the Front Singer. And the other Dreamgirl is Adrienne Warren. The Three Singers sound just terrific when they sing together – especially on “Cadillac Car.” It’s a fun song that is re-recorded by a Pat Boone Type singer, for the strictly White Audience.

I’d say that this is really heartfelt musical storytelling. Don’t wait – see it!

Having a ‘Rumble’ in an Irag Warehouse are Adrian Anchondo and Ryan Hough. Photo: Lois Tema

‘DON’T ASK’ – CAMPING AWAY FROM THE BRIGHTSIDE

THIS COULD BE YOUR GREATEST NIGHTMARE

It is something much more than a feel-good play – it’s a feel-everything play. Two attractive soldiers (a commanding officer and a private) start a sexual relationship during the Iraq war. As if there were not enough fire works going on around them, they have begun a little war of their own.

The opening scene shows us the Commanding officer humping the young private over a storage box in the Warehouse. The “Straight” officer does not want a relationship – but always seems to want more.

Yes, there is danger to come. The younger one (Adrian Anchondo as Bobby) is obsessed with his commander. He takes the Commander (Ryan Hough as Charles) down a road that he would rather not travel. The younger one is determined to get what he wants. He says “Don’t Ask” – but he’s talking “I’ll Tell”. And then begins the danger and despair that comes along with violence and blackmail. Be prepared for some really touchy violent situations to watch. But, they are not unreal. It happens to lots of people. Gay or Straight. One just wants a fling – the other wants more. And the two just won’t click. Threats led to more angst that involve many violent moments, physical and verbally.

This play is different. I liked much of it. The actors, kept my interest, especially the plotting, clever, no holds barred Private. As the tension builds – it begins to get a little tiresome as some of the same plot lines begin to be repeated too many times. But, I thought — well it seems to be building to a really horrible ending. Well, yes and no. That’s the way we are left. It was like a Chinese Dinner. You’re still hungry – and you don’t dare ask for more. Match Making in Iraq just doesn’t work. In the end – it’s like eating Meat Balls that are injected with explosives. Try it at you own risk. And no, you don’t get fries with that – but maybe a Gun.

RATING: THREE GLASSES OF CHAMPAGNE!!! (For the Acting) – trademarked-

Right up there, with all the great Jazz Ladies is Jacqui Naylor. Her recent appearance at the Rrazz Room brings back those fabulous memories of the Smokey, dimly lit Night Spots where people would flock to hear the likes of Julie Christie singing “Something Cool” (Billy Barnes). Now, comes Naylor – who creates those wonderful days with her smoky, jazzy and innovative interpretations. Oh, and I should add Sexy.

Naylor glides through a terrific “If I Were A Bell” and “Losing My Religion”, a song that always gets many requests by Naylor’s audience. I was really wowed with the Teddy Pendergrass song “Close The Door” and relished the sublime rendition.

Not only are the musical selections captivating – there is an aura about Naylor that reminds of Lizbeth Scott (movie star) and Lauren Bacall (movie/stage star). If the music doesn’t get to you, then Naylor’s sultry look will do it. Talk about refined showmanship – this is it! The unusual phrasing, the look, the confidence add up to a totally different listening experience.

Even with a Jazzy lift on the song “There’s No Sunshine When He’s Gone” – is not the kind of music you would want to hear if you are stranded on a Desert Island. But—in the Rrazz Room – it was perfect. Everything was just right — The right Music, the Right Talent, the Right Atmosphere, The Right Staff and the Excellent Lighting. Can’t beat that. I’m looking forward to her return at http://www.therrazzroom.com/