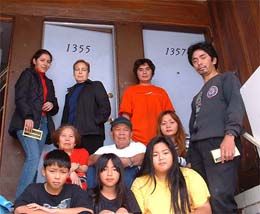 It has recently been reported that 4000 children have left San Francisco schools, and that 50% of families with children plan on leaving the city. But while everyone laments the exodus of kids from the city, San Francisco has not taken the dramatic action necessary to stem this trend. Here are three critical steps that city officials can take to make a difference.

The “trade off” for Supervisor approval of luxury condo projects is the alleged creation of “affordable” housing for low-income San Franciscans. But few if any of these units are likely to house low-income families with children.

The reason such families do not benefit is that city law does not require that they receive any such assistance. While city law requires projects with two-bedroom luxury units to provide affordable units of equal size, nothing prevents the developer from renting these large units to two single adults.

If we have any hope of keeping low-income families in San Francisco, our inclusionary law must require that large units be rented to parents with children.

I have spoken to many people about this proposal and there is an assumption that targeting families with children would be illegal. But I know of no binding court precedent on this, and do not believe a court would look for a way to invalidate such a measure.

As I stated above, dramatic action is needed and mandating that a percentage of inclusionary units be allocated to families with children has become essential. To allow hundreds of inclusionary units to be off-limits to kids—which is the current practice-makes a mockery of the political consensus that San Francisco is kid-friendly.

Changing the beneficiaries of the city’s inclusionary law is even more critical in light of other policy shifts. Locally, the Newsom Administration’s prioritization of affordable housing funds toward supportive housing has come at the expense of family housing. I do not fault the Mayor for trying to maximize the impact of a fixed pot of money, but this policy choice reduces new family housing opportunities.

Nationally, the Bush Administration’s war on Section 8 will speed the exodus of low-income families from San Francisco. Section 8 is the only reason many familes can afford to live in San Francisco, and if such subsidies are unavailable, families have to choose between homelessness or moving elsewhere.

Given these desperate times for affordable housing funding, it is imperative that inclusionary housing is targeted to parents with children.

During the past several months my organization, the Tenderloin Housing Clinic, has been working with the many Latino families now living in the Tenderloin. What has been striking is the complete disconnection of these families from the civic life of San Francisco.

While it would seem that Mission District Latino families would be more involved in city affairs, the sad reality is that most are as alienated from city government as those living in the families. The persistence of gang activity in the Mission and in Bayview-Hunters Point has left the police department as the main if not exclusive contact point between families and San Francisco government.

When families in San Francisco are struggling with high rents, street crime and often overcrowded living conditions, it is easy for them to conclude that they should move out of the city. For the many who have been displaced from the city via eviction, far more simply choose to move as there is little incentive to stay.

Organizing has greatly reduced alienation among SRO tenants, once the most isolated and disenfranchised of groups. But whereas the city funds neighborhood SRO Collaboratives that serve to connect tenants to civic affairs, there is virtually no such funding for organizing low-income families of color.

ACORN, the Associated Communities for Reform Now, has done extensive outreach in the Visitacion Valley and Outer Mission and has successfully engaged dozens of low-income families in neighborhood and city affairs. But if city government is serious about keeping low-income families in San Francisco, it must begin investing the necessary resources to begin the process of civic engagement.

There is a difference between enacting measures that help low-income families—like the local earned income tax credit—and instilling the sense that families must be at the table in the development of city policies. It is only the latter that works to convince families that it is worth staying in San Francisco despite the high housing costs.

Mayor Newsom has touted many “private-public” partnerships around children’s issues, but funding for organizing and empowerment remains nonexistent. The Mayor and Board of Supervisors could well find themselves criticized by the low-income families they empower, but if we are serious about preserving families than funding for civic engagement is essential.

San Francisco is doing better in this area, as the link between family flight and poor schools is well recognized. In fact, for all the media stories on policy differences within the elected Board of Education, the current Board is the most committed to parental involvement of any in at least two decades.

Groups like Parents for Public Schools and the PTA do their best to get parents involved, but connecting young monolingual Spanish-speaking families to the school process requires far more resources than either group currently receives. Increased outreach worker funding is essential to build parental involvement in schools among disenfranchised groups.

If anyone thinks that the city cannot afford to spend money for parental outreach, consider Oakland. When parents got fed up with the school system, over 4000 students suddenly “disappeared” from the district in a single year, plunging the schools into bankruptcy. The district’s progressive School Board, elected by a grassroots parent movement to finally reverse the district’s course, was then removed and replaced by a reactionary, unaccountable State Administrator.

The point is that San Francisco schools depend on classroom attendance for revenue, and an investment in increasing parental confidence in the system pays off. Staying on the current course means more school closures, more layoffs, and the continual move of low-income families to cities where they believe their kids will be better educated.

These three concrete actions clearly must be joined by many more. Suggestions are strongly welcomed and we will publish them.

Everyone says they want to keep low-income families in San Francisco—but it is time for actions to match the words.