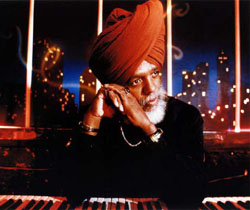 The last time I saw the incredible Dr. Lonnie Smith, was at the 2007 San Jose Jazz Festival, sharing a bill with amazing Marcus Miller and Dr. John. The good doctor returns to the Bay area this Friday night at the Herbst on Van Ness and not a moment too soon, because a double dose of soul is just what the doctor ordered. Dr. Smith that is, the reigning old-school Hammond B3 maestro who’s been handing out funkified prescriptions since breaking in with George Benson in the mid- 1960s. Another ‘60s B3 avatar, Reuben Wilson, leads the aptly named Godfathers of Groove featuring funk drum legend Bernard “Pretty” Purdie and guitarist Green Jr., son of the late soul jazz guitar great.

Smith, who was awarded his doctoral honorific by his peers, came up during the B3’s glory years and is arguably the most exciting organ player on the scene, an indefatigably inventive musician who has recorded albums exploring the music of Beck and Jimi Hendrix. A seminal figure in the soul jazz movement, he put the groove into Lou Donaldson’s classic 1967 Blue Note record Alligator Boogaloo. His own Blue Note sessions such as Think and Turning Point showcased some of the era’s most prodigious improvisors, including Lee Morgan, Idris Muhammad, David “Fathead” Newman and Bennie Maupin. More recently, he has released a series of acclaimed albums on Palmetto, leading the Jazz Journalist Association to vote him “Organ/Keyboardist of the Year” consistently since 2003.

Smith was born in 1922 outside of Buffalo in Lackawanna, New York, into a family with a vocal group and radio program. Smith says that his mother was a major influence on him musically, as she introduced him to gospel, classical, and jazz music. He was part of several vocal ensembles in the 1950s, including the Teen Kings. Art Kubera, the owner of a local music store, gave Smith his first organ, a Hammond B3.
His affinity for R&B melded with his own personal style, and he quickly became a local legend. He moved to New York City, where he met George Benson, the guitarist for Jack McDuff’s band. Benson and Smith connected on a personal level, and the two formed the George Benson Quartet featuring Lonnie Smith, in 1966.

After two albums under Benson’s leadership, (It’s Uptown and Cookbook), Smith recorded his first solo album (Finger Lickin’ Good) in 1967, with George Benson on guitar, Ronnie Cuber on baritone sax, Melvin Sparks on guitar and Marion Booker on drums. This combination remained stable for the next five years. After recording several albums with Benson, Smith became a solo recording artist and developed a career that has produced over 30 albums under his own name. Several legendary jazz artists have joined Smith on his albums, including Lee Morgan, David “Fat Head” Newman, King Curtis, Blue Mitchell, and Joe Lovano among others.

In 1967, Smith met Lou Donaldson, who put him in contact with Blue Note Records. Donaldson asked the quartet to record an album for Blue Note, Alligator Boogaloo. Blue Note was so impressed by the album that they signed Smith for the next four albums, all of which are now considered classics of soul jazz. This highly influential period produced Think (with Melvin Sparks, Marion Booker, Lee Morgan and David Newman) and Turning Point (with Lee Morgan, Bennie Maupin, Melvin Sparks and Idris Muhammad). The latter is largely regarded as his most seminal studio album.

Smith’s next album Move Your Hand was recorded at the Club Harlem in Atlantic City, New Jersey in August 1969. This surprise hit spread allowed his reputation to grow beyond the Northeast. He would record another studio album Drives and one more live album Live at Club Mozambique before leaving Blue Note. Live at Club Mozambique was recorded in Detroit on 21 May 1970, and is considered to be his finest live recording.

Godfathers of Groove leader Wilson was a ‘60s Blue Note labelmate with Smith who also recorded several excellent soul jazz sessions. He’s joined by Purdie, the supremely funky drummer whose rolling shuffle beat animated so many hits it was dubbed “the Purdie shuffle.” His credits include everyone from Dizzy Gillespie and King Curtis to Aretha Franklin and Steely Dan.