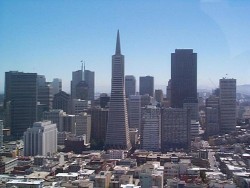 Let me see if I get this straight. The City Controller announces we’re broke: we can’t spend another dime of non-appropriated funds, and we expect a $500 million deficit by the end of the fiscal year. Meanwhile, Downtown commercial landlords – who shouldn’t be benefiting from Prop 13 anyway – are filing for tax breaks to pay less than what Prop 13 already grants them. The General Fund is currently $53 million in the red, with most of that coming from a hit in property tax revenue. It’s one thing if it was homeowners who bought at the wrong time (and are now seeking tax relief), but the City already gave rebates to most of these folks. No, the money San Francisco stands to lose largely comes from corporations who bought office buildings at inflated prices during the bubble – and now, as the City stands on life support, want a downward adjustment in their property tax bill. And without changing the state constitution, there’s little we can do to stop them legally.

As every Californian knows well, Prop 13 – which has hamstrung the ability of local governments to pay for basic services – freezes property taxes at 1% of the assessed value (usually when there’s a change of ownership.) Young homeowners complain that the neighbor who bought his house in 1955 pays a tiny fraction of what they’re paying in taxes. But the real winners of Prop 13 have been large commercial property owners (usually corporations or LLC’s.) Their building may have tripled in value, but the business entity that still owns it pays just 1% of the original purchase price.

Five months after voters passed Prop 13 in June 1978, the same right-wingers at the Howard Jarvis Taxpayer’s Association gave us Prop 8. Not to be confused with the anti-gay marriage initiative of the same name, Prop 8 requires properties to be re-assessed if the market value goes down. At the time, supporters claimed it would only be used to help homeowners who suffered property damage in a natural disaster, such as an earthquake. If your home was worth less than when you bought it for and the Prop 13 tax rate was adjusted, it was only fair to give you a break on the tax bill.

With San Francisco real estate being what it was for over 30 years, downward tax assessments were rare. But now with the real estate slump hitting us hard, a lot of owners are eligible – and requests at the Assessor’s Office have skyrocketed. As long as the property owner can prove the “assessed value” (i.e., how much they paid for it) exceeds the “market value” (i.e., how much it would sell today), the City must re-adjust their property tax bill – giving them a Prop 13 tax rate at the lower amount.

City Controller Ben Rosenfield took the rare move this week of de-certifying any new budget appropriations, because the General Fund had a current deficit of $53 million. Thirty-five million of that comes just from declining property tax revenues – money the City was counting on to replenish its coffers, but will likely be lost once the City Assessor processes these requests. There’s little we can do besides amending the state constitution, but the real scandal is where most of the requests come from.

Times are tough, and it’s certainly true that homeowners who bought their property in recent years have seen their values go down. Assessor Phil Ting anticipated this, and preemptively granted re-assessments to over 11,000 homes this year that had seen a slump in their market value. But the lost revenue in our budget to help this group of homeowners – most of whom live in the Excelsior, Sunset and Bayview – was only around $16 million. Now, the City stands to lose more than twice that – $35 million – from 4,000 additional property owners who have filed Assessment Appeals.

Where does this $35 million in lost revenue come from? The 4,000 properties asking for a rebate have a current combined assessed value of $29 billion. Nearly $22 billion of that money (or 74%) is from commercial properties alone. In other words, we are mostly talking about Downtown office buildings that were assessed in recent years – and are now requesting a rebate, just as the City faces its worst budget crisis.

Prop 13 – and the subsequent Prop 8 – was intended to help homeowners have some stability in their property tax bill. It was not pitched as a means of giving a windfall to large commercial landlords who bought when the market was hot – but now want to pay even less taxes than what Prop 13 provides them with. Eighty three percent of Downtown real estate changed hands from 2005 and 2008, along with 69% of all office space in San Francisco. Now, these are the ones about to bankrupt the City.

Granted, we should have seen this coming. From 2004 to 2008, property tax revenue went from $700 million a year to over $1 billion – a 43% jump – in part because these Downtown commercial properties changed hands, got re-assessed, and in turn funded the City coffers. Some will say we were too reliant on the budget growing each year, without thinking what would happen if the real estate bubble burst – and these owners would go to the Assessor’s Office and exercise their state right to demand a tax cut.

As the City faces a budget crisis, there are only two things we can do. One is to put pressure on these large property owners to drop their Assessment Appeals. Their demands to pay sub-Prop 13 taxes will have real consequences, such as nurses being laid off – and it’s time to personalize the more egregious examples. In 2005, Supervisor Chris Daly called out the SF Giants for seeking a $4 million property tax adjustment on Pac Bell Park. With the amount of money involved, it won’t be hard to identify specific properties.

A more permanent solution, however, is to build public support for amending Prop 13 – so that large commercial landlords can never do this again. It will require a state ballot proposition – which means building a large and savvy coalition to prevail. The California Teachers Association has submitted language for a “split-roll taxation” amendment that would exempt commercial property from Prop 13. It’s one of those ideas liberals love to talk about, but no one does anything until we’re in a crisis like this one. At this point, we can’t afford not to act.