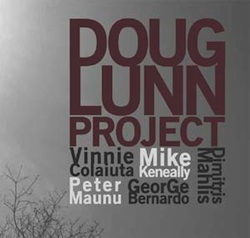 Virtuoso bassist Doug Lunn is best known for his work with some of the world’s best groups and musicians; the Fire Merchants, composer Mark Isham, guitarists David Torn, Andy Summers of the Police, the Out Trio, drummer Chad Wackerman plus many others. Lunn’s latest release, “The Doug Lunn Project” is a collection of music composed, arranged, produced and performed by Lunn, featuring the mallet work of George Bernardo, drummer Vinnie Colaiuta, guitarists Peter Maunu, Mike Keneally and Dmitri Mahlis. The music draws on a wide range of influences including Zappa, Miles, Stravinski, Coltrane, Stockhausen, Eno, Zawinul, McLaughlin, and many more.

Abstract Logix’s bio describes Lunn as “a multi-instrumentalist performer/composer who specializes on 5 string fretless electric bass. He has appeared on over 100 recordings with artists including Bruce Springsteen, Mark Isham, (the aforementioned Torn and Summers), and numerous film and TV soundtracks. He’s been the bassist/percussionist and musical director with Peter Buffett’s multi-media show “Spirit-The 7th Fire” on it’s PBS special, CD, and 3 national tours. Doug was the co-leader and featured composer for the critically acclaimed band “Fire Merchants” with guitarist John Goodsall(Brand X) and drummers Chester Thompson, Chad Wackerman, and Toss Panos.

Lunn toured Europe in 1997 with the trio “Subject/Object” which included drummer Vinnie Colaiuta and guitarist David Torn. Lunn recently recorded music for the movie “Taladega Nights” with guitarists Wayne Kramer(MC5) and Tom Morello(Rage Against the Machine). He’s also a member of the group “Out Trio” with drummer Terry Bozzio and Austrian guitarist Alex Machacek. In the last year he’s performed in the USA and Europe with the Chad Wakerman Trio along with guitarist Mike Miller.”

Lunn was a member of the house band on the late night “Dennis Miller Show” on over 150 TV shows in 1992. He was also a performer and musical director for the award winning “Friends & Artists Theatre Ensemble”(F.A.T.E.). Lunn spent many years as the percussionist and music director for “Swing Brazil Dance Company” and was involved with the organization and production of the 3rd and 4th versions of the “World Festival of Sacred Music” during September/October 2005 and 2008 in Los Angeles and fronts his own band “Retrophobia”…”

The Doug Lunn Project is a glimpse into the world of one of the most interesting bassists today. Lunn’s tune “Good Question”, (one of my personal favorites), actually reminded me a little of “Timeless”, (the classic ECM recording from the late 1970’s John Abercrombie/Jack DeJohnette era); spacious, yet delightfully inventive, an amazingly gorgeous. Lunn and the tasteful Bernardo on mallets are in very good company indeed. Lunn and company also delve into an almost Weather Report-like groove on his wonderfully, eastern-flavored “Lhasa”.

From the beautifully anthemic opening tune “Lovebirds”, to the incendiary, take no prisoners, closing cut “Air Raid (Action In Eluvia)”, Lunn and company take us on a gorgeous and energetic journey, not heard often enough in today’s music.