Dorian Grey – Queen of Narcissism; Trouble in Mind – Back Stage Drama; Amanda King at The Rrazz – Superb!; Darlene Popovic – “How Lucky Can You Get” 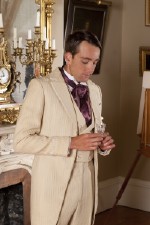 WHAT DORIAN GREY SHOULD BE: A TAUT GRIPPING THRILLER THAT INTRIQUES — A MASTERWORK OF SUSPENSE. BUT IT IS NOT ANY OF THE ABOVE. John Fisher has put his ALL into the version of the Oscar Wilde story about a young self-centered young man who wants to stay youthful forever — but like the painting in the closet it doesn’t hold up. It crumbles as you look at it.

The play does succeed on some levels. It is Cinematic. However, it has so many technical things going on that it loses it punch.

Sometimes, the Choreography is like a German dance troupe. Later on, it becomes Mime meets the “Snake Pit Movie.” There is just too much going on in this three-hour show. Fisher has thrown some comedic things into the pot (like when a woman screws Dorian from behind.) Where did that come from? I know there is a message there somewhere – but I didn’t get it.

Later on, we are treated to some gorgeous Opera music (Lovely). The musical interludes were a great help to move this muscular project from complete disaster. What is it they say – too much tinkering spoils the pot?

What it needs: It needs less. It is way too long. The play should not be any longer than the successful movie (one and a half hours). Decide what it is: Is it “Gone With the Wind” with a little torture thrown in for good luck, or is it “Frankenstein?” Actually, it is probably both of those.

There is not enough Wilde in the play. Maybe it’s a work in process. This is a tough one to call. At times – I was completely fascinated, and then it goes and takes a strange turn that completely destroys what I have just witnessed. Fisher has done a good job on some of the play. For instance, we don’t actually see the painting that grows old – but the Actors performances relay the horror, by reacting to the painting.

So there you have it. There is good and not so good in the play as it stands now. I think some editing would be helpful. I know that this is an ambitious story to put on the stage – but you don’t have to cram everything into it. Did we really need the nude scene? I don’t think so. It was so – NUDE. Aaron Martinsen has “The Pout to Die For” (and many did die for that pout) – but he didn’t have to strip down. You know what they say – when you’ve seen one you’ve seen them all.

The Acting is Superb by John Fisher, Aaron Martinsen and Jef Valentine plus marvelous supporting actors. Lighting good – but the bare stage echoes off the walls. Actors sounded better when they came down into the audience.

TROUBLE IN MIND BRINGS OUT RACE ISSUES IN 1950’s

They are rehearsing a play that is going to Broadway. The time is in the 50’s. A Black Actress (Viletta Mayer) is damn good and tired of portraying a stereotypical role. And she isn’t going to take it anymore. So during one of the rehearsals she lets all of her emotions out. Not only are there Race issues in the play – but there is also Gender typecasting issues.

However, not all the Cast members (half of the Cast is black and the other half white) agree with the volatile actress. Jobs were hard to come by in the 50’s for Blacks – and they did not want to lose the opportunity to be on Broadway.

I found that the backstage story in the first act was fascinating. And the acting was really first rate by all the Cast members. It is the second Act that lets us down. The ending is weak in this Alice Childress play, however the characters are sharply drawn and the seething nervousness boils underneath the characters – as they know that there is injustice here – but they are helpless to speak out. But one does speak out: “I hate the kind of play that bangs you over the head with a message!” an actor announces” – but then – that is what the play is all about. It’s a ‘Message’ play that does bang you over the head.

The play hits the “Bull’s-eye that is was written for.” At the Aurora Theatre. www.auroratheatre.org.

DARLENE SINGS KANDER & EBB: “HOW LUCKY CAN YOU GET” AT NCTC GIVES YOU THAT OLD ‘RAZZLE DAZZLE’

Darlene breezes through “Don’t Tell Mama” and gives us the torch song ‘Maybe This Time’ and a Wonderful “Kiss of The Spider Woman” – and then whisks us off to Broadway with “New York, New York.

I really loved “Sara Lee” and “Yes” from ‘70 Girl’s 70’. And some of the lyrics from some of the songs are salty fun. Here’s one: “When Men get upright – I feel Grand.” Bawdy is what I like. Then there are the songs of ‘Hurt and Love’ like this lyric – “I don’t remember you. I don’t recall a thing we used to do.” Get out the hankies – you’ll need it.

Then there is this from “The Grass is always Greener” – (Woman of the Year) – “I’ve had your husband!” Shocking yes – but you’ve all done it.

Having fun along the way Popovic says…”I see there are many Show Queens in the audience. Boy, is she good. Who would’ve guessed?

F. Allen Sawyer has smoothly directed this ‘Å’ plus evening of song and humor. Then there is the marvelous Joe Wicht (Musical Director/performer) who joins in on some of the songs. Darlene has a C.D. that is now for sale. It’s called “Love & Laughter” and that’s what you get with someone with such expansive talent. I found myself enraptured. She was a joy to watch and listen to these wonderful Kander and Ebb songs. Still time to see the show at The New Conservatory Theatre (Cabaret Room).

A GREAT CATALOGUE OF MUSIC

Amanda King has always been good – but now she has gone beyond good to ‘Absolutely Sparkling’. Her unique sound and uncanny ability to bring back the days of Anita O’Day, Mildred Bailey, Bea Wain and Blanche Calloway made this a very special musical trip indeed.

King takes the brilliant lyrics “Heart and Soul” and the fab “Rock’n Chair” (Carmichael) and makes them her own. And while doing that – you feel like your were back in the days of the “Speakeasies”, where this kind of music was born amidst a thick cloud of cigarette smoke.

Another special thing about the show is that King brings back the memories of the ‘Forgotten Women and Lost Songs” (the name of the show.) So expert is King with her phrasing that she is right up there with “The Best Glories of Cabaret Singers around!”

This is what great Jazz Singing is all about. King is really quite an amazing Jazz Vocalist. Her delivery is just impeccable – especially on “Oh, Lady Be Good.”

Another great treat for the evening was when Singer Russ Lorenson got up and joined King in a couple of songs. He also gave us a swell time with his medley of “Travel Songs” (on C.D.) Lorenson is another rising star in the Cabaret world.

This special evening at the Rrazz Room went by way too fast. Can’t wait for her next appearance at that magnificent Nite spot.