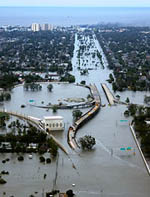 EDITOR’S NOTE: The authors are co-chairs of the Louisiana Supportive Housing Coalition.

Across Louisiana, political, business, religious and non-profit leaders urge Congress to not abandon the state’s most vulnerable victims of Hurricanes Katrina and Rita. Thousands of disabled men and women are suffering, homeless and without support. The only thing that will prevent their ongoing misery, disease and death is 3,000 housing rent vouchers. It’s so simple, so small by congressional standards, but it’s been shuffled around for 2.5 years — even though supportive housing has bipartisan support from Gov. Bobby Jindal, our congressional delegation and the White House.

The U.S. House of Representatives is taking up the 2008 Supplemental Appropriations legislation. Led by Senator Mary Landrieu, the Senate version includes $76 million in rental assistance for 3,000 disabled homeless and elderly people, but this is in danger of being negotiated out of the House.

We urge the House to not negotiate with 3,000 lives of our most vulnerable citizens.

This is the second time the House of Representatives has tried to strip this funding, and we call upon the House leadership, especially Congresspersons Nancy Pelosi, Jim Clyburn, Steny Hoyer, David Obey, and John Olver to ensure that our most vulnerable citizens do not suffer and die, neglected and forgotten, lost again in the shuffle of political wrangling.