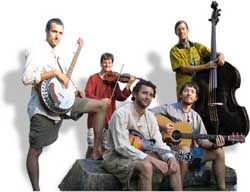 The Hot Buttered Rum String Band, one of San Francisco’s hottest up and coming acts brings their undeniably hip bluegrass sound to music festivals throughout the U.S this summer, traveling on their new flagship tour bus that runs on vegetable oil, featuring a plush interior made of environmentally low-impact components. Hot Buttered Rum, a national touring acoustical musical act, sets the example for their peers by practicing what they preach with their environmentally and socially conscious lyrics by touring in an alternative-fuel vehicle.

“As a touring band, we requires constant travel, and we are greatly concerned with environment. We have taken it upon ourselves to be a strong voice in the growing alternative fuel and clean energy movement by traveling in a vehicle that uses recycled waste vegetable oil for fuel,” states Zac Matthews, of the Hot Buttered Rum String Band. “By demonstrating and bringing attention to the feasibility of alternative fuel we hope to raise large-scale awareness to the problem and to help develop sustainable solutions.”

Since July 2003, HBRSB has traveled more than 50,000 miles in a school bus modified to run on waste vegetable oil, the famous BioBus acquired from students at Middlebury College in Vermont purchased by HBRSB on eBAY. HBRSB has helped raise awareness to the use of alternative fuel by providing by a grassroots educational program and garnering national press attention.

Hot Buttered Rum String band showcased their talent at South By Southwest music festival earlier this year, and toured with the String Cheese Incident’s Billy Nershi, and wife Julian Nershi of Honkeytonk Homeslice. HBRSB recently shared the opening act bill with Ben Harper at the Phil Lesh and Friends benefit for the Seva Foundation in Berkeley, CA. This June, Hot Buttered Rum String Band will be performing at the premiere Telluride Bluegrass Festival.

What can I say folks, I love this guy’s work! Well, we’ve got the next Cas Lucas Band gig at Cafe Amsterdam next Thursday night. For those of you who missed his last minute gig at the Boom Boom room, here’s yet another opportunity to see him!

“Rally the troups, Marin fans. Hoping to see you there….”
-Cas