Don’t Miss That: The Summer Jazz Line Up at Yoshi’s 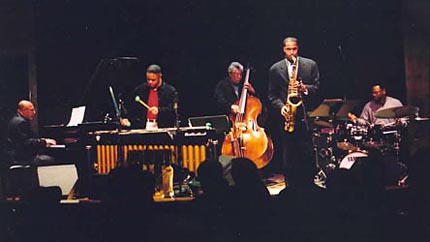 OK Jazz lovers, here is a stellar line-up of acts coming to Yoshi’s at Jack London Square in Oakland, including some old chums from my D.C. days, like the incredible bassist Ed Howard, Steve Williams on drums, and pianist George Mesterhazy, backing up the one and only Shirley Horn in September! Shirley lost a leg two years ago, and yet the girl still swings with the best of them. She told me recently, “I may be back on piano too child!” Don’t take my word for it, check out the list of acts for the summer, and see for yourself!

THIS WEEKEND!
Thursday, July 1 – Saturday, July 3
KENNY RANKIN
Thu 8:00pm & 10:00pm Shows $16
Fri, Sat Shows at 8:00pm & 10:00pm $20
In a remarkable recording career that spans almost four decades, Kenny Rankin has established an impressive set of credentials as an insightful songwriter, a distinctive guitarist and a world-class singer. Rankin’s distinctive vocal style can be heard on his latest Verve CD, A Song For You, where he interprets the Great American Songbook. With his supple, pristine tenor, Rankin has earned the status as a singer’s singer whose songwriting talents have also been widely recognized by his peers. These performances will feature a Roy McCurdy on drums and John B. Williams on bass.
http://kennyrankin.com

Tickets for All Shows August 2 – September 5 ON SALE
Tomorrow, Thursday, July 1 at 10am!

From St. Louis, alto saxophonist Greg Osby is one of the most prolific artists in jazz. An innovative, outspoken, often controversial musician, alto saxophonist Greg Osby has been a progressive force in jazz for nearly twenty years. With a full command of the bebop language, a taste for rhythmic complexity, and a fiery musical approach, Osby stands as one of the leading lights in jazz. He is a player of sturdy and flexible skills, a composer with a clearly defined personality and conceptual bent, and a bandleader with authoritative daring. He has performed and recorded with Dizzy Gillespie, Jack DeJohnette, Lester Bowie, The World Saxophone Quartet, Muhal Richard Abrams, Joe Lovano, and even the Grateful Dead and Phil & Friends and many more. The Greg Osby Four will perform material from the new Blue Note CD, Public. The group includes Megumi Yonezawa on piano, Matt Brewer on bass and Eric McPherson on drums.

“She is nothing short of amazing.” Ahmad Jamal
Making her Yoshi’s debut, Japanese-pianist Hiromi has created quite a buzz over the last few years. Mentored by keyboard giants like Oscar Peterson, Ahmad Jamal and Chick Corea, Hiromi has a truly unique her own musical world-view and dynamic piano style. Her trio will perform her original compositions from her new Telarc CD, Brain, the follow-up to the critically acclaimed, Another Mind, which highlight the flexibility of the trio, showing its many faces and colors, and pushing it to its limits of orchestral complexity. The resulting music is a virtual gallery of evocative musical pictures. The diversity of her music runs the gamut of rock, jazz, and classical creating a truly cross-cultural experience.

Thursday, August 5 – Saturday, August 7
BILL FRISELL WITH VINICIUS CANTUARIA & MAURO REFOSCO
Thu Shows at 8:00pm & 10:00pm $18
Fri, Sat Shows at 8:00pm & 10:00pm $22
“Frisell is a revered figure among musicians – his signature is built from pure sound and inflection; an anti-technique that is instantly identifiable.” The Philadelphia Inquirer
Guitarist Bill Frisell returns to Yoshi’s with a power packed group featuring world-renowned Brazilian artists, singer/guitarist Vinicius Cantuaria and percussionist Mauro Refrosco. This group explores the musical possibilities of Frisell’s own multi-faceted compositions and time-honored jazz and folk songs in a Brazilian World Music context. The diverse backgrounds and talents of this group provide a wide-open climate where an integration of many musical directions becomes possible. Vinicius has had his music recorded by many of the top popular artists in Brazil, including Caetano Veloso, Chico Buarque, Gilberto Gil, Gal Costa and many others. He has also worked with a wide variety of non-Brazilian artists including Angelique Kidjo, David Byrne, Arto Lindsay, Laurie Anderson, Sean Lennon, Ryuichi Sakamoto, Joey Baron and Marc Ribot. Percussionist Refrosco has performed extensively with David Byrne and others.

“Her provocative harmonic imagination explores the outer limits of jazz in a fashion that has rarely been heard since the ballad years of Bill Evans.” The Los Angeles Times
Throughout the course of her illustrious career, Brazilian pianist/vocalist/composer Eliane Elias has masterfully combined her passions for Brazilian music and American jazz. Elias is a powerful and lyrical pianist with an elegant exuberance and a unique, stylish technique. She easily and artfully meshes Brazilian beats and Cuban rhythms with straight-ahead jazz, and is equally at home playing intricate bossa nova and free-style improvisation. She performs distinctive renditions of a variety of Brazil’s music, including swaying bossa novas and moving interpretations of classic tunes by her country ‘s great songwriters. These performances will celebrate her new RCA/Bluebird CD, Dreamer. The new CD fulfills a career-long dream: recording an album of vocals supported by a full orchestra comprised of a fresh mix of songs from the American songbook and rapturous Brazilian bossa nova. Her trio includes Marc Johnson on bass and Satoshi Takeishi on drums.

“A mood that transcends the ordinary, that in one moment exudes warmth and is poignant, in another driving hard and swinging.” Shirley Horn
Boston-based Grammy-nominated vocalist Rebecca Parris is one of today’s most accomplished and influential vocalists. She has consummate musical skills, a natural stage presence and a dramatic delivery. Her dynamic style comes through in her unique interpretations of standards, ballads, blues, Latin and contemporary tunes that she performs with power, conviction and originality. She has a personal, confident sound, flawless intonation and an jazz feeling complete with fresh innovative vocal concepts.” Parris has performed and shared the stage with an impressive list of jazz greats including Dizzy Gillespie, The Count Basie, Woody Herman, Gunther Schuller Orchestras, Buddy Rich, Joe Williams, Shirley Horn and others.

“His music embodies all the qualities that make jazz an enduring, vital art form.” Stereo Review

Ron Carter is among the most original, prolific, and influential bassists in jazz. With more than 2,500 albums to his credit, he has recorded with many of music’s greats: McCoy Tyner, Tommy Flanagan, Gil Evans, Horace Silver, Bill Evans, Milt Jackson, Stan Getz, Dexter Gordon, Wes Montgomery, and even the rap group A Tribe Called Quest. In the early 1960s, he performed with Jaki Byard and Eric Dolphy and he later toured Europe with Cannonball Adderley. From 1963 to 1968, he was a member of the classic and acclaimed Miles Davis Quintet. Carter has lectured, conducted, and performed at clinics and master classes, instructing jazz ensembles and teaching the business of music at numerous universities. He was Artistic Director of the Thelonious Monk Institute of Jazz Studies and, after 18 years on the faculty of the Music Department of The City College of New York, he is now Distinguished Professor Emeritus. As a performer, he remains as active as ever. The quartet features pianist Stephen Scott (Sonny Rollins), drummer Payton Crossley and percussionist Steve Kroon.

Yoshi’s is proud the present the exclusive Northern California appearance of the Afro-Latin Super Band – Africando! Africando puts New York based salsa musicians together with Senegalese singers to create neo-traditional music. Combining the rhythms and styles of Latin America and Africa, Africando celebrates the diversity, explores the common ground and toasts the African spirit over unstoppable, all-dancing grooves. The five singing stars of Africando are accompanied by a12-piece Afro-Latin super orchestra, featuring a full Afro-Cuban rhythm section, horns and African percussionists. The music is Latin classics sung in Sengalese Wolof or a mix of Wolof and Spanish, and African classics redone with Latin rhythms and instrumentation.

Wednesday, August 25
“From the Soul to the Voice to the Song” ~ this highly imaginative a cappella band returns to what has become in recent years their home venue. SoVoSo brings a fresh and innovative experience to the room, singing a unique, compelling mix of jazz, world and R&B music all rendered in their trademark improvisational style. These shows will introduce new addition Ashling Cole, and new songs to be included on the band’s new CD slated for February, 2005. Don’t miss THE summer appearance of the hottest vocal band to come out of the bay area – you’ll be guaranteed to walk way surprised and inspired!
$14
Shows at 8:00pm&10:00pm!

Five-time Grammy-award winning composer and pianist Eddie Palmieri is one of the most prolific and popular Latin musicians in the world and a giant of Latin jazz. One of the true masters of the genre, Palmieri has contributed to the rich legacy of Latin jazz for over five decades. His bands combine jazz improvisation and harmonic sophistication with an unstoppable Latin groove, weaving a rich web of jazz phrasing, classical and progressive styles and fiery Latin rhythms and sounds. His early groups, including, La Perfecta and his continuing musical contributions have firmly established him in the pantheon of musical legends. His bands today always feature some of the best musicians and these performances will be a Latin-jazz jam-fest!

Bay Area’s Brazilian favorite, vocalist Claudia Villela has put together a wonderful night of Brazilian music featuring one of Brazil’s great virtuoso guitarists, Guinga. Inspired by the vast musical sounds of Brazil, the music will freely mix indigenous African and European styles with the harmonic complexities and sensibilities of jazz, in an approach both nostalgic and modern. This evening of music will feature the brilliant acoustic intimacy of two great Brazilian masters and will feature special guests.

Amaly Celeste Santos Salazar (May 17, 2004 – June 17, 2004) had a profound influence during her brief stay. Comfort for Kids is a unique program that cares for children with life-threatening illnesses at home, enabling families to spend quality time together.
http://www.johnsantos.com
http://www.hospicecc.org/main/comfortforkids.htm

Straight from New York City and Jazz at Lincoln Center, alto saxophonist Wess ‘Warmdaddy’ Anderson leads this group featuring pianist Cyrus Chestnut and trumpet Marcus Printup. Anderson is currently the lead alto saxophonist with the Lincoln Center Jazz Orchestra and a member of the Wynton Marsalis Septet. As a leader, Anderson has recorded and released three solo albums entitled Warmdaddy in the Garden of Swing (1994), The Ways of Warmdaddy (1996) and Live at the Village Vanguard (1998). An accomplished educator, Anderson is a frequent participant in Jazz at Lincoln Center educational events and is on the faculty of the Juilliard Institute for Jazz Studies. He plays in a vigorous hard-bop style, and his sound is rich and molten, hinting at an awareness of Cannonball Adderley. The music is modern hard bop and it swings very hard with highly unique, bluesy, soulful styles of playing. Pianist Cyrus Chestnut’s sound and style are deeply rooted in blues, gospel and spirituals with the fundamental elements of Fats Waller, Art Tatum and Jelly Roll Morton added to the mix. Trumpeter Marcus Printup is currently a member of the Lincoln Center Jazz Orchestra.

“A supreme jazz stylist with deep-seated subtlety.” Entertainment Weekly
“Horn’s taste is impeccable, her conviction contagious, and when she sings a lyric, we accept it as pure gospel.” Vanity Fair
Yoshi’s is proud to present multiple Grammy-winner and legendary pianist/vocalist Shirley Horn in our intimate jazz house. With a career spanning five decades, Horn is internationally recognized as the foremost singing pianist in jazz since Nat “King” Cole, and is one of the most influential singers of our time. Renowned for her inimitable ability to negotiate melodies and lyrics at an exquisitely unhurried pace, Horn simply delivers her romantic style and intimate workings of jazz standards and ballads all in a bittersweet way. For these performances, Horn will be backed by bassist Ed Howard and drummer Steve Williams, along with pianist George Mesterhazy.