Dont Let Them Steal Our Security From Us

by tiny/PoorNewsNetwork/POOR Magazine on January 31, 2005 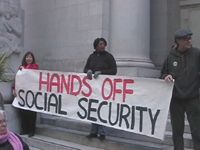 “Millions of unemployed citizens face the grim problem of existence, and an equally great number toil with little return. Only a foolish optimist can deny the dark realities of the moment.” -Franklin Delano Roosevelt March 4, 1933

Although the above statement was made more than 70 years ago by a rich white man steeped in extreme wealth and privelege, as far as Amerikkan politicians go,he wasn’t too bad. His actions and legislations made it possible for poor people and workers to survive in the US. For readers who don’t know, the author of that sentence; President Franklin Delano Roosevelt (FDR) was the architect of welfare, social security, a work creation program and countless other programs referred to as The New Deal, enacted after the Great Depression when millions of people became jobless, homeless and hungry.

The not so well-known reason FDR was so radical in his aid of poor folks was because at the time of his nomination to the democratic party in 1933, the hungry and jobless American citizenry were becoming increasingly radicalized; 60% of voters were registering as Communists.

“People think that Roosevelt is the reason that Social security was started in this country – actually it was because of the mass
mobilization of millions of workers in this country- in the 30’s there were national demonstrations led by working people all over the country,” Labor activist and working class scholar Steve Zelzer was addressing a crowd of over a hundred elders gathered on the temple of Amerikkan wealth and capitalism, i.e., The Pacific Stock Exchange in downtown San Francisco’s Financial District to protest Bush’ dangerous plan to dismantle this nations Social Security System. The organizers; The Gray Panthers chose this location, as one of the main benefactors of Bushs’ proposed plan will be Stock brokers, Venture Capitalists and huge investment firms lwho do millions of dollars of business everyday in this building.

“In 1934 there was a general strike by workers in San Francisco and Minneapolis – people said enough is enough – we’re not going to take it anymore- that’s what needs to happen now” To this statement, Steve got a rousing cheer from the crowd, who was simultaneously being pushed off the steps by the guards of property and privelege and abusers of poor people of color, the San Francisco Police, at the behest of some very bothered looking Stock Exchange men in expensive suits with tiny state of the art cel phones peeping out of their manicured ears.

“Almost 80 percent of Blacks 65 years or older depend on their monthly Social Security checks. Without those benefits, they would fall below the poverty level. -Rep. Tubbs-Jones(D-Ohio), a member of House Ways and Means Committee’s Subcommittee on Social Security, told reporters during a Dec. 15 conference call. “We want him (Bush) as well as all Americans to understand that his plan for privatizing Social Security would adversely affect the minority population of this country.”

Tubbs-Jones went on to explain that almost 80 percent of Blacks 65 years or older depend on their monthly Social Security checks. Without those benefits, they would fall below the poverty level. In fact, the Bush privatization plan would increase those numbers of Black seniors living in poverty from 23.9 percent to 58.2 percent.

So what is Social Security and why do we need it. First, if a worker becomes temporarily disabled which includes pregnancy leave for women, they can draw on their disability insurance which all workers pay into every month out of their payroll check, to help them survive. As well, if a family member dies, their Social Security benefits will go to their surviving family members and then like Rep Tubb Jones referred to, the monthly retirement benefits entitled to all elders over 65, many of whom are elders of color who have worked hard for years and still remain low-income in this racist, classist society that makes the attainment of wealth and security almost impossible for the majority of lower and middle income families and individuals notwithstanding the “Work hard and you’ll achieve the Amerikkan dream myth” . This last program is key to the Bush plan cause this is what Bush/Cheny Inc (read: Halliburton/Bechtel,Merril Lynch and their related posses) intend to make bank on by transferring Social Security benefits into stock accounts or 401k’s which theoretically looks ok on paper for middle class retirees but in reality is VERY flawed because in the event of a financial crisis, where you had to draw on the funds in the 401k you would be left with nothing in your “account” and no more wages left to build up another account balance, i.e., no more benefits.

Contrary to the scare tactics being promoted in the corporate media by Carl Rove and his puppet GW Bush about the crashing of the program, Social Security IS there for future generations. It has over a $1.5 trillion surplus that is growing. By conservative estimates, it can fund current benefit levels until at least 2042, and 73% of current benefit levels after 2042. Current benefit levels could be funded indefinitely by applying the existing payroll tax to incomes over $88,000. These projections actually underestimate Social Security’s strength because the projections assume future growth in Gross Domestic Product to be roughly half its historical value.

Finally, for very low-income disabled folks like my very poor, mixed race (African/PuertoRican) grandfather who has suffered with disabilities all his life and exists solely on yet another form of Social Security known as SSI, the consequences of Bushs’ proposed Social Security theft are dire. The claim by Bush is that this program would remain untouched, unfortunately that is another flagrant lie.

The ultra rich, poor people hatin, amerikkan power brokers who perpetrate all the real welfare fraud, corporate welfare, that is, have been trying to figure out how to get rid of the whole social security program since it and other social service programs referred to as The New Deal were instituted by FDR. So after they rob the coffers of the retirement fund they will conveniently run into “a budget deficit” and find a way to do away the “burden” of SSI, the lifeline for millions of poor Americans, including hundreds of thousands of disabled homeless people, leaving folks starving and hungry yet again. And all you anarchist leaning readers, please don’t shake your head and say, well that’s good cause then people will be desperate enough to “do something” The state of being that desperate is terrifying for those of us who have actually been there, and it is only a priveledged person who would say that letting folks become “that desperate” to cause action is ok.

“Kenneth Lay is a friend of Bush and he stole all the pensions from the workers at Enron that’s what Bush wants to do with all of our Social Security pensions.” Steve continued, “we need to organize millions of workers in this country to stop the privatization of social security- to fight against this war in Iraq- and we need to stop the war on the working people. In California Arnold wants to stop the guaranteed pensions of city , county and state employees, telling us that in place of pensions we need to put our money in the stock market,” Steve concluded with a call to mobilize for an upcoming march, “On April 28th workers memorial day, thousands of disabled and injured workers will march on Sacramento for our rights to benefits”

As I stood next to these determined elders holding signs that said don’t Enronize our Social Security System, i felt hopeful that maybe like in the 30’s we could wage a war against the lies perpetrated by a few that affect so many, but not unless all marginalized communities come together, and unfortunately I only saw a small smattering of youth and people of color at this rally so as you read this story valiant social change makers- make a commitment to get involved – or they will steal yet another one of our meager remaining rights from us again.

TO get involved in the Gray Panthers fight against these cuts call them at: 415-552 8800 or go on-line to http://graypantherssf.igc.org/index.html To read more work on the resistance to media and corporate lies by the poor folks affected by these lies go on-line to www.poormagazine.org