Don’t Let the Winning Streak Fool You, It’s Time for a Fire Sale 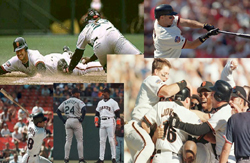 Following the Giants recent winning streak, the team is poised to make the same mistake it made last year — clinging to the unrealistic hope of taking the division, rather than trading veterans to acquire young talent for the future. The sooner we face this fact the better: the Giants season is over. The Giants cannot make up so much ground with four teams ahead of them in the division. Now is the time to unveil the “For Sale” sign.

Contrary to what Krukow or other Giants cheerleaders will tell you, the Giants are not underperforming. It’s not a matter of these guys just pulling together, focusing more, and regaining a “winning” frame of mind. That is a myth created by those that want to keep you coming to the games and buying $9 beers.

Pedro Feliz is a perfect example. If you listen to the commentators, he is not living up to his potential, and just needs to focus more on discipline at the plate.

I disagree. At a certain point, you need to accept that what we are seeing is his potential. He is not and never will be a star offensive player. At best, he’ll bat about .270, hit 25 dingers and go on some streaks now and then that showcase his power. He’ll also continue to strike out a lot, and sport an atrocious on-base percentage.

In fact, I’d argue that as many Giants players are overperforming as underperforming so far this season. Up until a couple weeks ago Klesko, Winn & Molina were on fire. Even after their numbers have settled down, they are still doing well. Klesko is hitting .289, compared with .248 in his last full season. Winn is hitting .286 (despite an awful start), compared with .262 last year. Add to that some exceptional short-term performances by rookies (Lewis and Shierholtz’s in their initial games), and we have little to complain about in terms of how actual performance is measuring up to potential.

And let’s not forget about injuries. It is remarkable how few injuries there have been to these aging Giants. Only Roberts has missed significant playing time. The odds are that some of our guys will end up on the DL for significant periods of time. This has got to be factored into considering the potential of this team to compete for the pennant this year.

So who are the Giants who are underperforming? Offensively, Omar Vizquel, Dave Roberts and Ray Durham. They will improve, but it won’t make much difference. The club will still lack any serious offensive power.

Two weeks ago, I wrote that the Giants should start rebuilding for the future by trading Matt Morris. I urged immediate action because his numbers would inevitably come back to earth, and they have. With recent weak starts, it will be harder to trade him, but I think he still has some value in the trade market. Sabean should shop him around without any further delay. But trading Morris is just the beginning.

We should trade any veteran player we can. We should acquire young prospects. Given that the Giants don’t have much to trade, we may not get top prospects, but we’ll get mid-level prospects, and who knows, we may find a diamond in the rough. Trading some of the veteran players would also give us a chance to give more playing time to our young position players. Frankly, we have nothing to lose and everything to gain.

Here are a few specific ideas. Offer Matt Morris to the Yankees who are in desperate need of pitching. Offer Omar Vizquel to the Red Sox, who might be interested since Lugo has been a disaster this year for the Sox at short. Offer Randy Winn to the Mets who may need a rightfielder depending on the severity of Moises Alou’s injury. Offer Pedro Feliz to anyone that will take him. Ask for one thing in return from anyone who bites: hitting prospects.

Or sit tight, ride the wave of recent victories, and fool ourselves into thinking we have a team that can compete this year. If the Giants go that route, the Giants Curmudgeon will have plenty to gripe about for years to come.

EDITOR’S NOTE: The Giants Curmudgeon hates soggy garlic fries, corporate stadium names and people who leave in the 8th inning. He cannot be reached for comment.