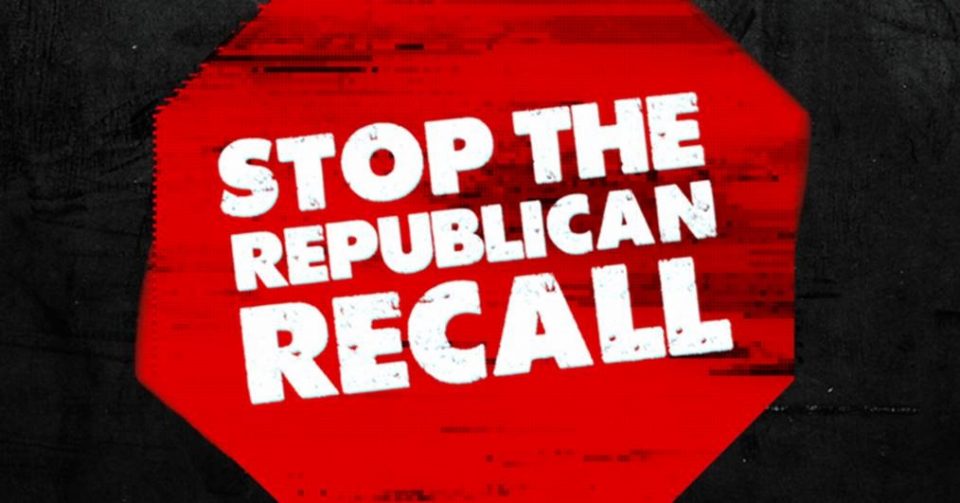 “Eighty percent of Republican registered voters said they were absolutely certain to vote, compared with only 55 percent of Democrats and about half of independents.”— UC Berkeley IGS/Los Angeles Times poll

When California reopened on June 17, Governor Gavin Newsom seemed certain to defeat the recall. A COVID-driven, unusually low voter turnout was the recall’s only hope, and that scenario was gone.

Until it resurfaced. Newsom now faces a September 14 recall with voters so focused on COVID that many may not realize that an epic Republican power grab is happening.

That has to change. And fast. Fortunately, past special elections with projected low voter turnout offer lessons on defeating the recall.

Create a Sense of Urgency

Most important is creating a sense of urgency. Unless Democrats and independents become alarmed over handing control of California’s governor office to a pro-gun, anti-choice, Trump-inspired, pro-insurrectionist mob, many recall opponents will not vote.

Consider the shockingly low Democratic voter turnout in the June 29 East Bay Assembly election to replace Rob Bonta. This race is in Barbara Lee’s congressional district, one of the most Democratic in the state. The top three finishers, Mia Bonta, Janani Ramachandran, and Malia Vella, all ran field campaigns.

Yet turnout was a meager 21%. That’s low even by special election standards. Most voters probably didn’t care which Democrat got elected. They were focusing on summer vacations and vaccines. Bonta and Ramachandran face an August 31 runoff and one wonders how low the turnout will be.

Now voters are laser focused on COVID’s resurgence, vaccination mandates, wildfires, and possible conflicts around kids returning to school. Recall backers are highly motivated while most Democrats are not highly engaged.

How does the anti-recall campaign instill and spread this sense of urgency?

It takes personal contact to get people to vote in special elections. I describe in Beyond the Fields, my book on the ongoing legacy of the farmworkers’ movement, how Clint Reilly and UFW veterans used a massive vote by mail campaign to defeat a 1983 recall campaign against San Francisco Mayor Dianne Feinstein. That anti-recall campaign had volunteers everywhere. Vote by mail was not as common in those days and the anti-recall campaign made it happen.

Fred Ross, Jr., who helped defeat the Feinstein recall and then worked toelect Nancy Pelosi in a 1987 special election, sees house meetings—which his father initiated and were used to build the UFW— as boosting anti-recall support. Ross Jr. offered this thought: “What if Newsom joined virtual house meetings by the thousands. He could speak directly to volunteers and get them energized. He could also invite special guests like Vice President Harris, Speaker Pelosi and former President Obama to join him for statewide virtual house meetings with a clear call for action. Our over 100 house meetings were critical to electing Pelosi because those attending became the core of her volunteer base. The same strategy could work here.”

Ross feels the campaign must create personal connections with voters. This means volunteers using social media, texts, personal contacts and emails to their networks raising alarm over a Trump and QAnon-backed power grab in California. If every volunteer made 50 contacts, and got commitments to vote early and/or set up their own contact network, anti-recall voter turnout would jump.

Last November people asked their networks to schedule when they planned to vote—the same should happen to stop the recall. Ross emphasizes that “anyone contacted who has not sent in their ballot yet should be asked to take a minute right then to do so. Have them put it in the envelope and get it ready to mail.”

Ross’ father used these voter outreach tactics to elect the first Latino to the LA City Council in 1949. They work!

Organized labor is already mounting a massive grassroots anti-recall campaign. The LA County Fed has a huge anti-recall campaign kickoff on August 7. The campaign includes texting, door to door canvassing, and a virtual phone bank. Sacramento’s County Fed has its kickoff the same day with Alameda and Contra Costa Labor Councils’ launching their door to door canvas a week later.

The California Labor Federation is already building a sense of urgency. Its email last week laid out the stakes: “Working people are up against a national network of very rich anti-union funders who are taking aim at our pensions, workplace safety rules, our public schools and even our right to vote! These Trump allies, like Marjorie Taylor Greene, will stop at nothing and spend millions more than they already have to put an anti-union extremist in the governor’s office.”

Art Pulaski, Ron Herrera, Rusty Hicks and other labor Democrats are all in. We need to say the same about environmentalists, urbanists, tenant advocates, civil rights activists, and the entire network of Democratic and Green Party members.

All must make stopping the recall their top priority through September 14.

I know the consequences of not prioritizing a recall from my experience in San Francisco in August 1980.

After voters backed district elections in 1976, San Francisco’s corporate interests got voters to repeal district elections in an August 1980 special election. District voting had brought Harvey Milk to the Board of Supervisors, along with more pro-tenant supervisors. But heavily backed by affluent white voters, repeal succeeded in 1980 with voter turnout a fifty year low of only 34%. Repeal only passed 50.6%-49.4% but citywide elections continued until 2000.

In either June of July of 1980 I was at one of our regular citywide tenants meetings at Old St. Mary’s Church. We were planning our fall legislative campaign and were excited about having a more pro-tenant Board of Supervisors. Supervisor John Bardis, a tenant activist elected to represent the Sunset District, attended the meeting. Bardis told the group, “While you are all talking about your plans for the Board we have a political wildfire burning that could eliminate district elections.”

I remember thinking, “well, of course Bardis is concerned about repealing district elections because he could lose his seat.” Never did I or anyone else at the meeting give the proper response: John, you are right. We won’t have a legislative agenda without district elections so we need to drop everything and defeat the repeal.”

The potential repeal of district elections was not about Bardis. Just like the recall is not about Newsom. Rather, these low-turnout special elections are about subverting democracy for elite interests.

Democrats were thought to have little hope of winning Senate contests in Georgia’s January 2021 runoff. It was assumed that lower voter turnout would doom Dems. But Stacey Abrams and Georgia-based organizations long working on voter turnout changed that thinking. With the help of UNITE HERE workers skilled in operating voter field campaigns, both Senate Democrats won. Many hotel workers in California are still out of work. They should now be tapped by the anti-recall campaign.

Another talent pool to be tapped are Californians who made phone calls in the state to take back the House in 2018. These folks have a proven commitment and many will be eager to help. I assume California’s Democratic legislators have already turned over their volunteer list to the anti-recall campaign; their own agenda is dead under a Republican Governor.

Gavin Newsom is not Gray Davis. Voters like Newsom. Newsom is also a fierce and tireless campaigner, which I saw firsthand when he campaigned for San Francisco mayor in 2003. Newsom can energize voters about this fight but needs the Democratic base to set up house meetings and other structures to enlist volunteers.

If this recall wins, expect blue state Democratic Governors across the nation to face their own recall elections. After all, if heavily blue California can have their governor recalled, why won’t other states use low turnout special elections to do the same?

This recall is voter suppression 2.0. And if you don’ t want this to become a new national norm, start working to defeat it.