Don’t Confuse the Teachers’ Strike with the Contract: What Really Happened in Chicago 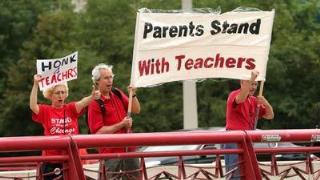 First, there was Madison, a welcome flash of lightning awakening us from the long, quiet night of labor passivity. The events came fast and hard and thousands flowed into the capital square and were ready for a showdown. But, with a vacuum of street leadership, it only took a few weeks for the Democratic Party and the union bureaucracy to channel this potential energy into a moribund recall Governor Walker effort. Half a year later came the Occupy Movement, involving tens of thousands of new activists, in a brave stand against Wall Street’s plan of austerity for us, and profits for them. Again, lack of leadership and direction slowed this movement to a crawl and provided an opening for the forces of repression to step in. Building on these fight-backs, the Chicago Teachers Union (CTU) was preparing to confront Mayor Rahm Emanuel and his billionaire cronies in a fight for public education. I was a participant in the Chicago Teachers Solidarity Campaign, an organization formed to support the CTU during the strike, and these are some of my observations.

To begin with, don’t confuse the strike with the contract. The strike was an overwhelming huge victory which I will explain. The contract, on the other hand, is a small victory for the teachers. In another period, it would have to be portrayed as a major concession. But, we are not in another period, rather, we are in a period of deep neoliberal attacks.

We are in a world where the rich class has had its way for over thirty years, with a working class and trade union movement so timid and on the defensive that all they seem to want is to hide and not be noticed. A trade union movement, whose answer to every question is to cling to the outside of a lifeboat with “Democratic Party” stenciled across its bow. There they cling, frightened of sharks, dehydration and drowning.

Since the middle of the 1970s, a very organized and coordinated attack has come down on the working people of this country. Phase one was to establish a narrative of greedy workers and put-upon management. Phase two was to begin chipping away at the private sector unions. Here, of course, they had a couple of advantages—outsourcing and downsizing.

Slowly, they either moved jobs out of the North to the South or sent them overseas, or forced those remaining industries to accept less and less.

By the 1990s they had the private sector union movement small enough to drown in Grover Norquist’s bathtub. The labor union bureaucracy didn’t want to live to fight another day, but merely to stay on life support.

By this time phase three was in full assault mode. Go after the last bastion—the public sector.

At the same time, they increased the ideological fight against “big government.” The wealthy class never reconciled itself to the Progressive Era, The New Deal, or the Great Society. These were times of gains for us and, therefore, as they viewed it, losses for them. They regrouped, no longer willing to tolerate interference with their heightened need to accumulate capital in this long period of increased international competition.

The public sector seemed to be as easy pickings as did the private sector. Again, the wealthy class didn’t try to be a python and absorb the whole meal at once.

Instead, they initiated an ideological campaign backed by think tanks, foundations, and the media. Here, the lynchpin was, and is, the teachers’ unions across the country.
It is not an accident that the richest of the rich have been in the forefront of this narrative of failing schools, failing kids and failing teachers.

Start with Bill Gates, who has moved from mosquito nets to charter schools, testing and union busting as his idee fixe.

Next the Walton Family, who never saw a union they didn’t want to bust. The Kochs. The Pritzkers. Almost all the hedge fund managers, bankers and other CEOs are united in their hatred for public education.

Here, it must be pointed out that both the Democrats and Republicans have bought into this “reform” story. Arne Duncan, Rahm Emanuel, and Barack Obama buy totally into this approach, and they ain’t Sarah Palin.

Over the last ten years or so these people have had their way. Cowardly and complicit union leaders—American Federation of Teachers president Randi Weingarten being exhibit A—have gone along with this BS until blaming the teachers has become the default position of much of the country.

No Child Left Behind and Race to the Top are two sides of the same coin. Flip that coin and the problem is—the teachers. Not poverty. Not lack of childcare. Not crumbling infrastructure or adequate funding, just greedy teachers and their obstructionist unions.
No one, nowhere, has challenged this vicious cycle. Then along comes the Caucus of Rank-and-File Educators (CORE) victory, electing Karen Lewis to the CTU presidency in 2010, and with it a whole new ballgame.

The CTU now had a leadership and program not willing to play ball with the Democratic Party or the union bureaucracy. This is a leadership with many experienced class struggle people who understand what must be done—Say no to Rahm. Say no to the Gates and Say no to the Pritzkers. Say no to a corporate agenda for the schools. Say no to a vision of the future where children are drones taught just enough to become cogs in their machine.

This union leadership knew the first step in their counteroffensive was to engage their rank-and-file. They went school by school and teacher by teacher, to involve them in their union. Unlike the Vaughn and Stewart union administrations before it, they valued input from the ranks.

Next, they went to the communities. They were there when the parents protested for a library in the Pilsen neighborhood and they were there to protest every school closing that came up. They were on the offensive.

This leadership also understood the importance of solidarity. I remember marching behind their banner in Madison. They were there for UNITE-HERE, they solidarized with the postal workers, they solidarized with the Chicago Transit Authority (CTA) workers.
This leadership kept the membership mobilized. Town Hall meetings. Mass demonstrations at the Auditorium Theater. Labor Day rallies. And more. They did not run and hide.

When Rahm and his arrogant school board came with their one-sided proposals and their insulting refusal on the four percent raise, they thought they could roll right over the CTU and have their way.

After all, didn’t Rahm get his way as Obama’s-Chief-of-Staff ? Didn’t he get his way as Chairman of the Democratic Congressional Campaign Committee? Antiwar Democrats? Irrelevant. Progressives? Fucking retards. Yes, he had his way until he ran into Karen Lewis and the class-conscious leadership of the CTU.

The CTU stayed visible. The CTU engaged allies; other unions, the community and students (the Voices of Youth high school students were really inspiring). They did not fold up at the first sign of adversity.

So my evaluation is—the strike was a huge success. It serves as a template and a model of how to fight the seemingly invincible juggernaut. The juggernaut that thinks it controls the future.

Guy Miller is a 66-year-old native Chicagoan. He worked for 38 years as a switchman on the Chicago Northwestern and Union Pacific Railroads, a proud member of local 577 of the United Transportation Union before retiring in 2008. Currently, he works in a Chicago supermarket and is a member of the United Food and Commercial Workers Local 881.