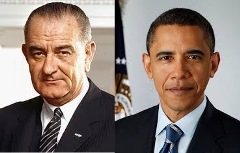 NY Times columnist Maureen Dowd has never liked Barack Obama, so it was fitting that she blamed him for the Senate’s failure to break a GOP-led filibuster on gun control bills. According to Dowd, Obama “doesn’t know how to work the system” and “still has not learned how to govern.” But while Obama’s lack of political skills still bedevils supporters, he did “work the system” to pass gun control. He brought Newtown parents to the capital to pressure Senators, used his “bully pulpit” to push for stronger background checks, and did what he could to get the 60 votes. But unlike immigration reform and gay marriage, where the passion and strong self-interest are on the side of supporters, those passionate about guns are more likely to oppose new laws. The real culprit here is the GOP political leadership, who have gotten away again with overturning majority rule.

I wrote on January 31, 2013 that despite all of the post- Sandy Hook publicity, passing “strong gun control legislation remains an uphill fight.” And while I thought a weak measure would pass to relieve the pressure for action (which might still occur), the national grassroots activist base for new regulations still cannot match that of the NRA and other opponents.

Dowd has been around long enough to know that Senators are not swayed by national polls. So while 90% of Americans support stronger gun laws, Senators look only at the personal political implications. And they do not see incumbent Senators being defeated due to opposition to new gun regulations.

The Myth of Lyndon Johnson

Dowd grew up in the DC environment of Lyndon Johnson, who Robert Caro has immortalized as a guy who forced opponents to compromise and knew how to get things done. Johnson practiced the politics of hard persuasion, famously forcing others to negotiate with him while he sat on his toilet. Unlike Obama, who Dowd castigates for choosing “not to get down in the weeds and pretend he values the stroking and other little things that matter to lawmakers,” Johnson loved to stroke.

The notion that Johnson turned adversaries into supporters by the power of his persuasion is a great myth that has become fact. But here is the political truth.

While Johnson had to deal with conservative Southern Democrats, he also had many liberal Republican allies. In fact, a higher percentage of Republicans backed Johnson’s acclaimed 1964 Civil Rights Act than did his fellow Democrats, and many also backed the War on Poverty, Medicare and other parts of Johnson’s progressive agenda.

Does anyone doubt that President Obama would have gotten strong gun control measures through a Senate that was 2/3 Democrat and included progressive Republicans? And even with large majorities and great political skills, Johnson could not prevent Congress from quickly rolling back his domestic spending agenda.

LBJ was a supreme legislative strategist. But even he knew that no amount of arm-twisting or persuasion can persuade Senators to cast votes that they believe endangers their political survival.

The political dynamics around gun control must be changed. At a minimum this requires anti-regulation Republicans to be defeated by pro-gun control Democrats in 2014. New York City Mayor Michael Bloomberg is expected to help fund such an effort. Democrats who see gun control as a winning issue could also continue pushing state laws, which could send a political message around Governor and legislative races next year.

Following the first Earth Day, activists were trying to figure out how to defeat anti-enviro politicians. They created a national “Dirty Dozen” list and ran candidates against them (Leon Panetta got his political start winning a congressional seat in 1976 against a Republican on the list). The League of Conservation Voters still runs such a campaign, and it would seem to fit perfectly into making gun regulation a litmus test issue next year.

Electoral wins are essential, but not sufficient. There must be grassroots organizations mobilizing people around gun control. While the Sandy Hook killings necessarily relied on multi-issue groups like MoveOn, activists cannot defeat the NRA without a grassroots base for whom gun regulations are the top priority.

On gay marriage and immigration reform— two national issues where progressives have found success— activists have such a committed grassroots base. Absent an investment in creating and sustaining such a base, no amount of presidential urging will bring the new gun regulations that the United States desperately needs.