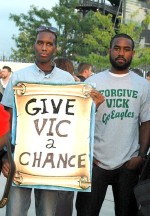 PHILADELPHIA-Media, police and fans wearing the Eagle green Vick 7 jersey far outnumbered the handful of protesters at convicted dog killer Michael Vick’s first game in an Eagles uniform. Eagle fans cheered Vick during his brief appearance in which he completed one pass during his six plays. Outside the stadium about 20 anti Vick protesters and about 50 Vick supporters held separate gatherings well covered by the army of reporters, photographers and camera crews outside the stadium.

The Eagles signing of Vick after his reinstatement to the NFL after serving a two-year Leavenworth federal prison term for dogfighting shocked the sports world and has become the number one topic on sports talk radio, especially in Philadelphia, which has some of the nation’s most rabid sports fans. If you believed the discussion on Philly’s three sports talk stations, hundreds, if not thousands of animal rights activists and fans opposed to Vick playing for the Eagles were going to picket outside the Eagles stadium. Many fans calling into Philly sports talk radio said they weren’t going to buy Eagles jerseys, planned to sell their Eagles season tickets and predicted that Vick would be greeted with a massive chorus of boos Philly fans have become famous for nationwide.

Mondesire and national NAACP leaders say the extremely high unemployment numbers and recidivism rate among African American males is directly tied to employers who automatically reject any job application in which an applicant acknowledges a felony conviction.

Missing from Philadelphia and most of the Vick controversy was the Rev. Al Sharpton. Rev. Sharpton, usually one never to shy away from the cameras, has had very little to say about the Vick controversy. Sharpton has been active in efforts to prohibit employers from asking job applicants about their criminal background. Sharpton and other Black leaders believe applicants should wait until the first interview to inquire about a potential employer’s criminal background so that the applicant can explain the circumstances of the conviction.

The lack of protests outside the Eagles stadium last night, despite all the over the top predictions of Philly’s sports talk show hosts, also raises questions about whether the loud screams and shouts by a few well organized and media savvy activists and talk show hosts represents the views of the masses. The nearly all-White composition of Vick protesters in Philadelphia resembles the almost all-White makeup of protesters at Town Hall meeting opposing President Obama’s health care reforms also driven by the hosts and callers to talk radio, the mostly conservative political counterpart of sports talk radio.

Public Enemy had a song called “Don’t Believe the Hype.” Could that phrase describe the often made up outrage and fury toward important, and not so important issues facing Americans today?