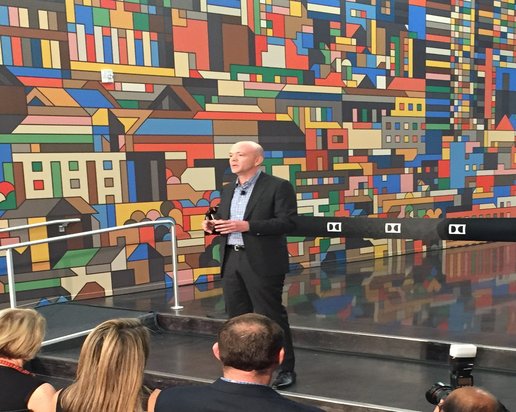 Dolby Laboratories officially opened its 9th and Market headquarters yesterday, joining Square and other businesses relocating to the area without the incentive of a  tax break. Dolby did not get the Mid-Market/Tenderloin tax credit because the Board of Supervisors wisely exempted longtime occupied buildings, and Dolby’s 1275 Market building was long used by the State Workers Comp Insurance Fund. Despite not getting the geographically limited tax break, Dolby’s commitment to the area  has led it to partner with local nonprofit groups and provide community benefits.

Dolby reminds us that while Mid-Market has become identified with tech, most of the new businesses between 5th and 9th Streets are not tech related. Dolby is a forty year old company that was in San Francisco before anyone even heard of the Internet. Long renowned for its pioneering sound systems, Dolby’s 1275 Market headquarters is a center for arts, scientific innovation, and a research laboratory all at one site.

Mayor Lee described Dolby’s opening as a “gift to all of San Francisco” and as “Christmas arriving early.” Lee sees Dolby’s “world-class brand” as a perfect fit for the reviving Mid-Market. Dolby’s arrival adds a legendary company to a fabled street, and the company’s 750 employees will boost neighborhood businesses.

Mayor Lee was beaming at the Dolby opening, as his dreams for a transformed Mid-Market are becoming reality,

Dolby’s exciting and transparent ground floor will also encourage pedestrians to come by the area. 1275 Market joins Twitter’s home in being renovated to create new ground floor activities, an often overlooked positive associated with the street’s transformation.  Coupled with the enhanced walking environment created by the August removal of private cars from Mid-Market, a street many pedestrians once avoided is becoming a walker’s destination.

Dolby joins what has become an extremely diverse group of new uses along Mid-Market. Mid-Market now has the area’s closest approximation  to a supermarket, the Market, under the Twitter building. It has the beautiful new ACT-Strand Theater and such new neighborhood serving businesses as Huckleberry Bicycles, Equator Café, and The Hall food emporium.

Mid-Market will soon host many new tourist hotels, as well as new housing.  But the earliest of these projects is at least two years away. And the future of the shopping center at Mason and Market remains unclear.

One of the biggest changes in Mid-Market has gone under the radar: the transformation of the infamous green color office building at Sixth and Market (995 Market).

If you have seen photos of this beautiful historic building before it was foolishly “modernized” in the 1960’s, you will ask why the green material wasn’t simply stripped off and the original look restored. Unfortunately, a prior owner tried this and learned that stripping off the green took the underlying bricks with it.

As a result, new owners did the best job possible in restoring 995 Market. It has gone from being an eyesore to offering a positive image for Mid-Market.

The owners of 995 Market did ruffle some feathers by leasing the large ground floor space to a CVS. Many felt that with a CVS a block away at 1001 Market, another was not needed in such a prime location. CVS also offers a generic, homogenous look, conflicting with efforts to make Mid-Market a dynamic, happening place.

Others believe that the location’s proximity to Sixth Street made attracting a tenant difficult, and that the lighting and security offered by CVS will benefit nearby residents. I’m in the anti-CVS camp. Let’s hope that Walgreens or another high paying chain competitor to CVS does not now feel compelled to find its own Mid-Market location.

The landmark Hibernia Bank at 1 Jones (at McAllister) is in the Tenderloin, but its visibility from Market Street connects it to Mid-Market. Like 995 Market, the Hibernia was a jewel of a building allowed to fall into extreme disrepair.

But unlike 995 Market, the historic beauty of the Hibernia has been restored. Thanks to the patience of Seamus Naughton and his partners, the Hibernia renovation is almost done and the building could be occupied before the end of the year. All that awaits is a tenant.

The combination of Hibernia’s revival and the planned construction at the nearby former site of the Market Street Cinema will improve two of the worst spots in the Tenderloin/Mid-Market. All that’s missing is the completion of the Renoir Hotel renovation (which now has Cahill Construction involved but seems as far off as ever) and approval of the Shorenstein housing development at Golden Gate and Jones (the southeast corner of which is apparently a drug dealer free zone). Shorenstein’s project will hopefully reach the Planning Commission this year but given the glacial pace of the San Francisco development process one never knows.

Dolby’s opening coincides with the Market Street Prototyping Festival, whose must-see Mid-Market art installations are on display through October 25. And on October 1, there is an Art Night SF in UN Plaza from 5pm-9m.

At 7pm that night the Tenderloin Museum will be hosting rock critic Joel Selvin talking about the Grateful Dead, Crosby, Stills, Nash & Young and other greats who recorded top albums in the Tenderloin. So hit the Art Night first and then head up to the museum for a full cultural experience.

Problems remain in Mid-Market, but Dolby’s opening sends a powerful message. The company had many places where it could have relocate. That it chose Mid-Market is a huge vote of confidence for the area.

Randy Shaw is Editor of Beyond Chron. You can learn about Mid-Market’s long relationship to the Tenderloin in his new book, The Tenderloin: Sex, Crime and Resistance in the Heart of San Francisco