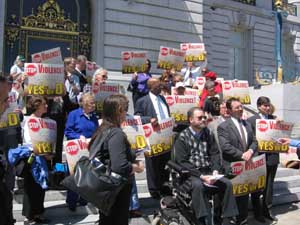 Proposition D was put on the ballot for one reason and one reason only: to stop the city from transferring violent patients to Laguna Honda Hospital where, sadly, they have been threatening and assaulting frail, elderly and disabled patients as well as staff ill-equipped to handle them.

By specifying in the city’s planning code that Laguna Honda may be used only for the purpose for which it is licensed, the initiative would give advocates of frail, elderly and disabled patients an effective tool to put a stop to this policy – which, by their own admissions, public health department officials adopted to save money.

Taking our concerns to the city’s health commission and going to court have not been effective for two reasons: the commission is not truly independent from City Hall and the courts will not consider the case if the city submits a plan to correct the problems, which it then doesn’t follow. Precious time is lost trying to protect elderly patients from harm by going back to court only to have the city submit another plan, which it fails to follow…again.

Unfortunately, for various political and financial reasons, San Francisco Public Health Director Mitch Katz, Mayor Gavin Newsom, the corporate-funded Committee on Jobs, the Chamber of Commerce and the city’s powerful unions do not want voters to get a chance to decide the real issue: Should Laguna Honda Hospital remain a place where poor, elderly residents as well as frail and disabled patients can safely receive 24-hour nursing care on a long-term basis – the purpose for which voters in 1999 authorized $299 million in public bonds to reconstruct the facility.
So instead, the opponents are trying to confuse voters with a barrage of disinformation, including false charges that the measure is discriminatory and represents a public land grab on the part of its backers.

First, the land use language in the initiative, as described by city officials in the voters’ handbook, is not accurate. Technically, Prop D would amend the public land section of the planning code to include a special district restricting the use of Laguna Honda to patients it is licensed to serve and who do not pose a danger to themselves or others. The special district would be limited to Laguna Honda’s exact present location. The measure does not legalize construction of similar facilities on any other piece of public land.

The reason we felt it necessary to formalize the existence of Laguna Honda at its present location was to prevent the city’s interests from suing in order to use the facility for other purposes.

If the city continues to send patients to Laguna Honda where they cannot be cared for safely and effectively, patient advocates could ask the city’s Zoning Administrator to enforce the law. Important decision-making such as this has been taken from the hands of Laguna Honda doctors.
Second, the measure is not discriminatory.

This claim originates from two national organizations -– Protection and Advocacy, Inc. and Independent Living Centers. Opponents have latched onto it.
This is the truth: both organizations are vehemently opposed to caring for disabled and elderly patients in any institutional setting. Shutting down Laguna Honda and the remaining similar institutions in the country altogether is their ultimate goal, if you take a look at their literature.

If Prop D is discriminatory, then so are existing city, state and federal laws concerning Laguna Honda Hospital. Prop D merely puts those laws into the city’s planning code.

Opponents have hurled another false charge at Prop D. They say the measure would result in the displacement of 300 Alzheimer’s patients and cost the city $27 million to relocate them. This claim is truly offensive. It is based on the notion that Alzheimer’s sufferers pose a physical danger to themselves and others. And it has been refuted by a local organization that advocates for Alzheimer’s patients.
In fact, Laguna Honda has always cared for patients who have mental illnesses – so long as their primary diagnosis is medical. That includes patients suffering from dementia such as Alzheimer’s.

Sending violent patients to reside in beds next to those historically served at Laguna Honda is clearly not tenable. For the past two years, the hospital has failed the state’s annual inspection, mostly because of the incidents of abuse.
This has a real impact on taxpayers. Because the health department has never complied with its own plans to address this problem, the state is fining the city $1,000 daily and withholding all Medicare and Medicaid funding for all newly admitted patients. This will cost the city millions and render the city’s current practices – aimed at saving money – nonsensical.

Violent psychiatric patients and those with severe substance abuse problems – the ones public health officials say cannot be treated affordably at San Francisco General Hospital (SFGH) because they cannot be rehabilitated over a short stay – deserve care at a facility equipped to handle their special needs. Ironically, the city already has a place that could provide these patients with effective care and rehabilitation.

That is the Mental Health Rehabilitation Facility, located on the grounds of SFGH. But to successfully handle patients there, the department would have to implement the business plan former health director Sandra Hernandez proposed for the facility in the mid-1990s. (Instead, Katz eliminated most of the beds for severely mentally ill patients and the psychiatric rehabilitation program)

Even with more and better-trained staff at Laguna Honda, violent patients could not be treated properly there, because neither the existing buildings nor those planned for construction are adequate or approved for that purpose.

Meanwhile, for every violent patient the city has transferred to Laguna Honda, an elderly person either has been shipped out of county and away from their family or possible has died at home.

Janice E. Cohen, M.D. is a San Francisco resident and co-author of Prop. D. She is also the Former Chair of the Mental Health Section of the American Public Health Association and previously a Psychiatric Attending at the city’s Mental Health Rehabilitation Facility.