Do Democrats Have a Plan for California? 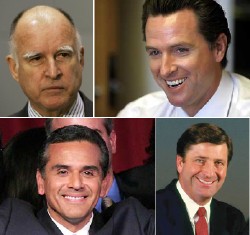 California is not doing very well. It has the largest budget deficit of any state, and its funding of schools, health care, transportation and other basic services is held hostage by far right-wing Republicans. Yet California is staunchly Democratic in presidential and U.S. Senate races, and produced the greatest number of Obama volunteers of any state. Why this disconnect? How is it that a state that votes progressively on national issues has allowed its public sector to decline, and subjects its employees to annual layoff fears? There are many explanations, but topping the list is a lack of statewide political leadership. Former Governor Gray Davis never excited grassroots progressives, and the legislative leadership team of Don Perata and Fabian Nunez were more concerned with expanding term limits than enacting progressive laws. Now, with the 2010 Democratic Governor’s primary approaching, California has a new chance. Can Jerry Brown, John Garamendi, Gavin Newsom or Antonio Villargaigosa fill this leadership gap? Or must California’s grassroots progressives take charge themselves, advancing statewide initiatives to address problems that Democratic politicians have not solved.

California progressives are understandably proud of all the work they did to elect President Barack Obama. This effort also helped give Democrats large majorities in the House and Senate, and has set the country on a progressive direction for the first time since at least 1964.

Meanwhile, our prison industrial complex keeps expanding. The state Democratic Party presides over a state willing to spend whatever it takes to lock up nonviolent offenders while denying college to those who have played by the rules.

If California’s future is measured by our education system, we are in deep trouble. And we are in this difficulty because the state’s Democratic Party and progressive activists have allowed right-wing Republicans to exert major control over the state’s budget.

I say “allowed” because there is no other explanation for elected officials and activists failing to put a measure on the November 2008 ballot removing the 2/3 vote requirement to pass a budget. Although state Republicans made their opposition to new taxes clear, progressives passed up a large turnout ballot whose voters would have approved such a reform. Passage of such an initiative would have avoided the billions of dollars in cuts we went on to face, with more cuts slated for future years.

Last November, I wrote an article asking, “Where is California’s Barack Obama”? Today, the likely field of Democratic candidates for Governor is as follows:

If there is anyone left on this planet who still thinks Brown is progressive, read Paul Hogarth’s recent piece. And then talk to tenant advocates in Oakland, prison reform advocates, or anyone actually familiar with his record over the past decade.

He’s taken some progressive stands, but he’s not the new face that California Democrats want.

He was hurt by Prop 8, and is now being criticized in the newspaper that long adored him for missing meetings, leaving the state, and otherwise not being on top of the city’s massive budget deficit. He seems to be cultivating Steve Westly Democrats, but Westly was easily beaten in the 2006 primary by Phil Angelides.

As the state’s potentially first Latino Governor, Villaraigosa could create Obama-type excitement. And with Ace Smith at the controls, nobody will run a better campaign.

But many in Los Angeles are wondering about Villaraigosa’s poor performance in the March 3 election, when he barely avoided a runoff despite lacking any opponent with name recognition. Voter turnout was only 15%, which led many commentators to openly question how excited the mayor’s base is about his governor’s candidacy.

Others note that Villaraigosa still has not implemented most of his 2005 platform, raising questions about his ability to send California on a new direction. His defenders argue that he inherited too many problems to solve in one term, and that the physical geography of Los Angeles, along with it being a city within a separate county government, makes it hard to achieve major changes in only four years.

Once Villaraigosa enters the race, he becomes the clear favorite. But the ability for any new Governor to make a difference in Sacramento requires the passage of ballot measures, and progressives can no longer wait for politicians to make this happen.

The People Must Lead

In 1976, the United Farmworkers of America (UFW) collected 720,000 signatures in only twenty-nine days to qualify a statewide initiative for the California ballot. Volunteers secured all signatures.

Yet today, when we have email, the Internet, and a much larger population, progressives feel required to use paid signature gatherers for statewide measures, which can require over $3 million. So organized labor and other progressive groups are reluctant to embark on such measures, figuring the high cost of qualifying the measure must then be followed by millions of dollars to get it passed.

This cost-benefit analysis has led California to its current morass.

If we have learned anything from the past months, it should be that putting money into state candidates will accomplish less than passing the budgetary reforms and tax hikes needed to return California to its leadership in education and other areas.

John Burton, who is likely the next California Democratic Party chair, understands the importance of such initiative reforms. While State Senate leader, Burton pushed for such initiatives only to see them lose at the ballot box due partially to a lack of grassroots mobilizing.

But if you are a teacher, have kids in California schools, are a public employee, or care about the state’s future, you are probably reconsidering past decisions to stay on the sidelines while these ballot measures affecting the state were up for a vote.

It’s time for the people to say “Yes We Can” to a new progressive future for California. Once the people lead, the politicians — particularly those seeking their votes — will follow.