Ditka, Obama and Me 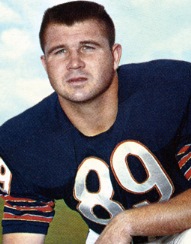 December 9 is Ditka Day in Chicago, and during the Bears Monday night game Mike Ditka will have his number 89 retired. Ditka was my favorite football player during my youth and I was ecstatic when he became the Bears coach. I regularly quote his line about team owner George Halas’ cheapness— “He tosses nickels around like manhole covers”— and this outspokenness is why the Bears did not retire his uniform earlier.

Like other working-class ethnics whose political views moved right in the 1970’s, Ditka became an increasingly vocal political conservative. Republicans floated his name as a possible opponent to an insurgent young Democratic named Barack Obama in the Illinois 2004 U.S Senate race, but Ditka declined. Ditka recently described not running as the “Biggest mistake I’ve ever made. Not that I would have won, but I probably would have and he wouldn’t be in the White House.” That’s the confidence that made him a Hall of Fame tight end, but that also reflects his disconnection from political reality. The 74-year old Ditka reflects a shrinking generation of blue-collar Americans who benefited from New Deal and Great Society programs only to believe that they “made it on their own,” and who spent decades voting to deny these opportunities to future generations.

Every Chicago Bear fan owes a great debt to Mike Ditka. But for Ditka, the team would still be seeking its first title since 1963. It’s no coincidence that he was a star on the 1963 team and the coach of the legendary 1985 Bears ( Rich Cohen has written a new book on this team, Monsters: The 1985 Chicago Bears and the Wild Heart of Football)

My strongest recollection of Mike Ditka as a player occurred during an early season game played against the former Los Angeles Rams in the Los Angeles Coliseum. And to my great joy– before writing this I googled the incident to make sure my memory as a 10-year old was correct —and it is!

Legendary Chicago newspaper columnist Mike Royko’s September 20, 1966 column exactly describes what I recall seeing (on the sports segment of the evening news) that night. The game was played on Friday night, September 16, 1966.

Here is how the great Royko described it:

“Last Friday, a skinny youth ran on the field during the tense final minutes of the Bears-Rams game in Los Angeles.

While more than 50,000 fans cheered and 8 million people watched on TV, the youth sped down the field, his head held high, the wind in his face. Then Mike Ditka stepped from the huddle and slammed him.

The fans booed Ditka, but that was wrong. Ditka has been trained since high school to knock down anything that moves.

The young man flew in the air. He was limp when he landed and shaky when the police led him away.”

I was upset that the fans booed Ditka, and a little surprised at Ditka’s violent ramming of his shoulder into the kid’s face. But that was how Mike Ditka played the game. The fan had come on to Ditka’s turf and the great tight end felt he had no business there. So he sent him a message in the only way available at the time.

(Why was I, a Los Angeles resident with no Chicago connections, a Bears fan? Because I loved bears and got hooked when I saw the Bears mascot in the 1963 title game).

I realize when the Bears traded Ditka in 1967 that his criticism of Halas’ cheapness was correct (when I repeated it to a team exec in 1971 he tossed me a quarter and said “Here’s one of Halas’ manhole covers.”). Halas destroyed the Bears franchise for nearly two decades by not hiring Bears defensive coordinator George Allan as his replacement. When Allan left to coach the Rams in 1966 and turned a longtime losing team into a steady winner, Halas’ great mistake was obvious.

Ditka won two Super Bowls with the Dallas Cowboys, the latter as an assistant coach. His coaching success left many Bear fans, including myself, hoping that he would return to the Bears. He seemed the only person who could turn the failing Bears franchise around, and I saw good times ahead when he became the Bears coach in 1982.

He lived up to expectations. For the only time in the past fifty years, Ditka turned the Bears into consistent winners and title threats. From Walter Payton to Jim McMahon to Mike Singletary to Richard Dent and so many other stars on those teams, Ditka again made the Bears the Monsters of the Midway.

I don’t know if the 1985 Bears were the greatest single season team in NFL history, but they were certainly the greatest with colorful personalities. And had Ditka or the General Manager acquired a quality backup for the oft-injured quarterback Jim McMahon, or had McMahon not gotten injured in 1986, the Bears would have repeated as champs.

Ditka was fired after the 1992 season. Players were tuning him out and the team lacked talent. Some felt Ditka was so involved with writing books, running a restaurant, and profiting from his iconic status in Chicago that he was less focused on coaching the Bears.

Ditka’s subsequent hiring as New Orleans Saints coach in 1997 was a disaster. The NFL had passed him by, and when he was fired after the 1999 season, his coaching career was over.

Son of a welder, Mike Ditka was part of a generation of “white ethnics” who moved to the right following the passage of civil rights legislation and expansion of government in the 1960’s. I have read enough interviews with Ditka to conclude that he is among those who prefer “the good old days” when men were men and traditional perspectives about class, inequality, sexual orientation, gender and race were not questioned.

But even those who disagree with his politics will be on their feet cheering as the Bears retire Ditka’s #89.

Randy Shaw is Editor of Beyond Chron and a long suffering, lifelong Chicago Bears fan.