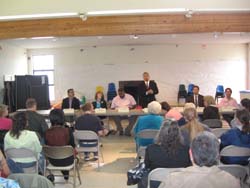 For decades, residents of San Francisco’s Excelsior, Ingleside and the Outer Mission have complained about getting the short end of the stick at City Hall. So it’s no surprise that at a September 13th forum for District 11 Supervisor, every candidate pledged to fight hard for neighborhood services. Randy Knox, Julio Ramos and Myrna Lim each presented themselves as “outsiders” who would take on the status quo—as Knox blamed an inadequate Police Department, Ramos took on municipal executives and Lim blamed undocumented immigrants. Meanwhile, the two candidates with City Hall experience—John Avalos and Ahsha Safai—talked about tangible results they produced for District 11, even if it means taking on your boss. But Safai (who worked for Mayor Newsom) sounded more eager to run against Chris Daly—as he focused on the District 6 Supervisor rather than Avalos in his closing statements. Avalos (Daly’s ex-chief of staff) avoided attacks on the Mayor, and focused on his neighborhood roots as a “community organizer.”

For most San Franciscans, District 11 is an after-thought—as it frequently gets omitted from tourist maps. But the District also has the highest percentage of homeowners in the City, which means that residents pay a disproportionate share of the City revenue. And with escalating crime in the neighborhood, residents are worried that they’re left to fend for themselves while City Hall focuses on other concerns.

“I haven’t seen a beat cop on Ocean or Mission or Geneva Avenue in 20 years,” said Randy Knox, a criminal defense attorney—who seemed most comfortable talking about public safety concerns. “Everyone talks about community policing, but that means more than just security cameras. We should have our cops and firefighters living in the City.”

Julio Ramos, who serves on the City College Board, said each Supervisor should have a District office for constituent outreach—an idea that Tom Ammiano proposed in 2001. “You have to be in the Mayor’s face all the time,” he said, when it comes to getting resources for your neighborhood. When asked who he would vote for Board President, Ramos said he wouldn’t make any commitment “without concessions for the District.”

Myrna Lim, who is running for the third time, also tried to play “outsider”—but her politics were far more conservative than the others. She derided the City’s large budget (saying we have a “spending problem”), said the District needs more parking garages and advocated repealing the Sanctuary Policy. “Most crimes,” she said, “are committed by undocumented immigrants.”

Avalos, who until recently worked for Supervisor Chris Daly, cited his 10 years of living in the District. He talked about helping to put up a mural in the neighborhood, brought money to the OMI Family Resource Center and the Geneva Avenue Car Barn, put on the Excelsior Festival, and helped bring families into the planning process for the Excelsior Library. “I’ve been a community organizer,” he said. “Just like Barack Obama.”

Predictably, Avalos was asked about how he’d part ways with his former boss on certain issues. “There are some things I agree with him, and others I don’t,” he said. Avalos later said he supported the Small Business Assistance Center—which Daly had opposed.

Safai, who worked for Mayor Gavin Newsom, also talked about how he stood up to his boss. “Last year, I took on a signature drive because District 11 was not getting its fair share of park services,” he said. This effort, which included delivering the petitions to Newsom, resulted in $4 million for Cayuga Playground in the February 2008 Parks Bond.

But Safai also used his closing statement to attack Chris Daly—apparently hoping to turn this race into another “Newsom v. Daly” proxy fight. “I would never vote for Chris Daly for Board President,” he said. “He doesn’t care what neighbors think about issues like JROTC, Community Courts or the Zoo. These issues are San Francisco Values.”

Ironically, Safai also said that he wanted to “bridge the divide” at City Hall—an obvious reference to the partisan rancor that has plagued local government for the past few years. Voters don’t want to hear another election about the personality fights between Mayor Newsom and Chris Daly. They want results, and District 11 needs results in its long-neglected communities. Avalos didn’t attack Newsom, so Safai shouldn’t attack Daly.

All the candidates seemed eager to talk about what they bring to the table, and the work they can deliver for District 11. And except for Safai’s closing statement, that’s pretty much what he heard at Saturday’s forum. With six weeks left in the Election, the race for District 11 Supervisor should be about what issues matter in this neighborhood—and not what candidates think about a colleague who’ll be gone in two years.